New Delhi: Jammu and Kashmir (Reorganisation) Bill has been passed by the Rajya Sabha on Monday with 125 members voted in favor of the bill and 61 voted against the bill.

Article 370 of the Indian Constitution, that gave special status to the state of Jammu and Kashmir, was removed by the Centre through a Presidential order, Union Home Minister informed the Parliament on Monday.

Amit Shah moved a resolution in Rajya Sabha which stated that all clauses of Article 370 would no longer be applicable to Jammu and Kashmir.

Read | With the removal of Article 370, what has Jammu and Kashmir lost?

All hell broke loose in the House soon after Shah made that announcement with Opposition leaders volubly protesting the move.

There were indications in the last few days that the Centre might go for this historic move as additional forces were continuously pushed into the Valley, tourists were asked to leave and large gatherings forbidden.

At midnight on Sunday, three of Jammu and Kashmir's most prominent politicians — Mehbooba Mufti, Omar Abdullah and Sajjad Lone were put under house arrest.

Internet services and mobile services were suspended and Section 144 was also imposed from midnight.

Here are the highlights:

06:43 pm: Voting on J&K Reorganisation Bill underway in Rajya Sabha. Due to technical issue, voting will be through voting slips.

06:27 pm: Amit Shah said, "Several MPs have asked how long will J&K remain a Union Territory- I want to assure them when situation gets normal & the right time comes, we are ready to make Jammy and Kashmir a state again. It may take a little longer, but it will become a state once again, one day."

06:09 pm: "You stand here in Parliament and say bloodshed will happen in Kashmir. What message are you sending to the valley? You want them to continue living in 18th century system,don't people there have right to live in 21st century?Those who provoke have kids studying in London and US," Shah addressed in Rajya Sabha.

06:02 pm: Amit Shah said, "Ayushman Bharat scheme is there but where are the hospitals? Where are doctors and nurses? (in Kashmir) Those supporting 35A please tell me which famous doctor will go and live there and practice? He can't own land or house nor his children can vote."

05: 49 pm: Home Minister Amit Shah in Rajya Sabha said, "We don't believe in politics of religion. Do only Muslims live in Kashmir? What do you want to say? Muslims, Hindus, Sikhs, Jains, Buddhists all live there. If 370 is good, it is good for all and if it is bad, then it is bad for all."

05:48 pm: Shashi Tharoor, senior leader of Congress, on Article 370, said, "This is not the Indian democracy we have cherished for more than seven decades.The assurances that successive rulers of India including those of BJP have given people and leaders of Kashmir and the international community now stand torn into shreds."

05:47 pm: Defence Minister Rajnath Singh in Lok Sabha: "Home Minister has assured that discussion on the resolution (to revoke Article 370) will be held tomorrow and he will answer all the questions. So, there is no reason to walk out of the house."

05:46 pm: Amit Shah in Rajya Sabha, "I want to tell the people of Jammu and Kashmir the damage Articles 370 & 35A did to the state. It is because of these sections that democracy was never fully implemented, corruption increased in the state, so that no development could take place."

05:42 pm: TMC walks out of Rajya Sabha; MP Derek O'Brien says, "From 11 this morning, we have been seeing procedural harakiri. We can't see this anymore, the constitutional immorality."

04:40 pm: Senior Congress leader Kapil Sibal said, "Today we should think about why we are here and what should democracy involve. I know the Bill will be passed as you have manufactured a majority, therefore, we can do nothing about it.While you call this a historic moment, only history will judge whether it was historic or not."

03:53 pm: P Chidambaram of Congress in Rajya Sabha: "Momentarily you may think you have scored a victory, but you are wrong and history will prove you to be wrong. Future generations will realize what a grave mistake this house is making today. "

03:45 pm: Nationalist Congress Party has abstained from voting on this bill.

03:40 pm: Punjab Chief Minister Captain Amarinder Singh said, "Constitution of India had been rewritten without following any legal provisions. Such a historic decision should not have been taken and pushed through in this arbitrary manner."

03:25 pm: Ramgopal Yadav of Samajwadi Party said, "If you wanted to remove article 370 then you should have done jus that. Why did you abolish statehood and made it a UT? World history is witness that any attempt to suppress people through force has always failed. You should have taken people into confidence."

03:00 pm: NSA Ajit Doval is expected to visit Kashmir valley today along with other senior security officials to review the situation on ground. NSA Doval had earlier visited Srinagar in last week of July before the implementation of decision to revoke Article 370.

02:30 pm: Ghulam Nabi Azad, Congress in Rajya Sabha: Shameful that you have turned J&K into a non entity by making a Lt Governor there, so that you can appoint even a peon or a clerk, sitting in Delhi.

01:05 pm: Indian Army and Indian Air Force have been put on high alert, following revoking of Article 370 and other decisions announced by Government of India.

12.45 pm: National Conference leader Omar Abdullah said Kashmir was ready for the “long and tough battle ahead” after the government scrapped Article 370. “This unilateral decision by the government is a total betrayal of trust. The government resorted to deceit, stealth in recent weeks to lay ground for these disastrous decisions,” he said.

12:08 pm: BJP leader Ram Madhav lauded the government's decision on Article 370 in Jammu and Kashmir and said the martyrdom of its ideologue Dr Shyama Prasad Mukherjee for complete integration of the state into India has been "honoured".

12:05 pm: Notes of despair rose from the Valley with former chief minister Mehbooba Mufti tweeting that India had failed Kashmir in keeping its promises. “Today marks the darkest day in Indian democracy,” she said on the government’s move on Article 370.

Foreseeing “catastrophic consequences for the subcontinent," Mehbooba said: “This unilateral decision of the government to scrap Article 370 is illegal, unconstitutional; will make India occupational force in J&K.” She said India wants the territory of J&K by terrorising its people.

11:50 am: PDP's Mir Fayaz and Nazir Ahmed Laway were asked to go out of the house (Rajya Sabha) after they attempted to tear the Constitution.

11:12 am: Union Home Minister Amit Shah said, “I am ready for discussions by the Leader of the Opposition, the entire Opposition and members of the ruling party over the Kashmir issue. I am ready to answer all questions.”

11:10 am: Ghulam Nabi Azad said, “Entire Valley is under curfew. Political leaders including three former chief ministers are under house arrest. There is a war like situation in the state, so this should be discussed on priority.”

10:40 am: Congress leaders Anand Sharma, Ghulam Nabi Azad and Ahmed Patel at the Parliament premises for the meeting of Congress MPs. 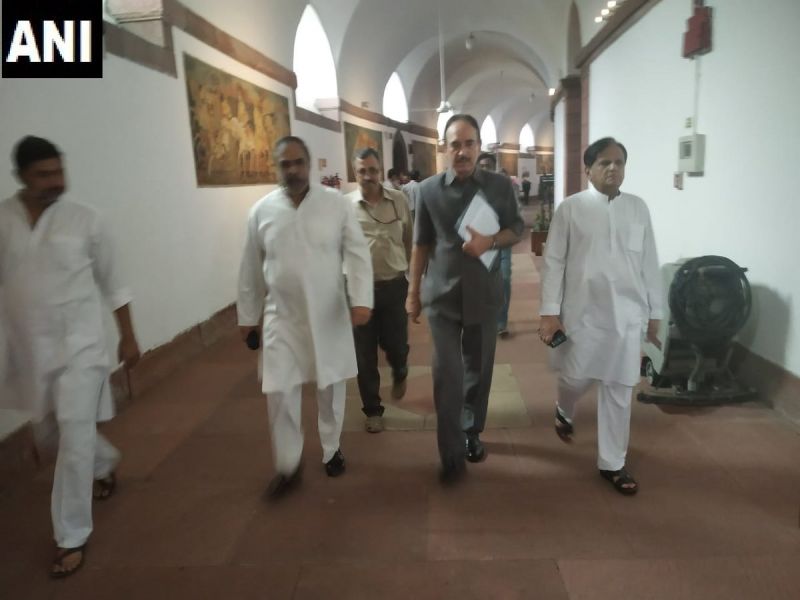 10:37 am: Latest visuals from Leh. People carry out their daily chores normally. Classes in schools, colleges and other educational institutions resumed normally today. Restrictions under Section 144 CrPC have not been imposed in the region.

#WATCH Jammu & Kashmir: Latest visuals from Leh. People carry out their daily chores normally. Classes in schools, colleges and other educational institutions resumed normally today. Restrictions under Section 144 CrPC have not been imposed in the region. pic.twitter.com/SD8FtNvuI3

10:35 am: Latest visuals from Doda; security forces have been deployed in the area. Schools reopened normally today in Leh, classes resuming in colleges and other educational institutions too.

Jammu and Kashmir: Latest visuals from Doda; security forces have been deployed in the area. pic.twitter.com/K1ldQ73tCZ

10:28 am: Leaders of Opposition parties met in Parliament complex to discuss the security situation in Jammu and Kashmir. The parties have also given adjournment notices in both Lok Sabha and Rajya Sabha. Leaders of political parties including the CPI, CPI(M), RJD, AAP, TMC, DMK attended the meeting.

10:25 am: Union Home Minister Amit Shah arrives at Parliament. He will speak in Rajya Sabha at 11 am and in Lok Sabha at 12 pm today.

9.30 am: Cabinet meets ahead of Union Home Minister Amit Shah's address in Parliament.

Gymkhana stampede victims delighted to be at RGICS

Chandigarh airport to be named after Bhagat Singh: PM Modi