Covid-19 India Updates: We're up the curve now. Here's what to expect

With things getting frantic in several states, civic agencies have doubled up on disinfecting as many streets as possible. This is a scene from Visakhapatnam, where the Greater Vizag Municipal Corporation is using mist cannon to spray sodium hypochlorite on roads and buildings. (DC Photo: Murali Krishna)

India is now poised at the foot of the expected exponential curve of theCovid-19 epidemic, with the active cases count crossing the 2000 mark last night. As per the latest update by the government’s dashboard on MyGov.in, there are 2322 active cases of coronavirus positive cases now. There have been 62 deaths so far.

India is now essaying the steep curve up right now. The total number of cases has doubled in the last three days. We were at 1,251 on March 31 and now stand at 2322.

Indianexpress.com reported that over 25 per cent of the positive cases so far are linked to the Tablighi Jamaat congregation held at Nizamuddin in Old Delhi last month.

Friday saw the biggest spike in 24 hours, with 478 new cases reported. Of these 247 have been traced to the Nizamuddin gathering.

While it is tempting to think that the epidemic can be arrested if we track down each of the contacts of the Nizamuddin positivies – quite a daunting task by itself—we are now receiving cases that have no travel history at all. As in the case of the Rajasthan woman who died last night.

Jaipur: A 60-year-old coronavirus positive woman having no travel history died at a hospital in Rajasthan's Bikaner on Saturday as the state reported 12 fresh positive cases, taking the tally to 191.

The victim was a 60-year-old woman who had been admitted at the PBM Hospital at Bikaner four days ago. She had no travel history. She was handicapped and on ventilator.

The death toll due to COVID-19 in India has risen to 68, the Health Ministry bulletin this morning said. The number of cases is now up to 2,902. We'll have the full story soon.

A little good news on a grim day

Bhopal: The first person to test positive in Bhopal, a London-returned woman, and her journalist father, have been discharged from the AIIMS hospital after their repeat samples tested negative this morning.

Telangana had two deaths on Friday, and reported 75 new positive cases. This was the highest number of cases to be reported on a single day, indicating that the epidemic is now at the foot of an exponential curve. The total number of positive cases stands at 229 and the total death toll at 11.

Tamil Nadu had the big spurt, with the total number of coronavirus positive patients zooming to 411. On  with Friday, 102 positive cases were detected. Except two patients in Chennai, one with a travel history to the U.S. and another with a 'co-morbid condition', the remaining 100 fresh positive cases were all at the Tablighi Jamaat congregation in New Delhi in March. Of the 411 positive cases, 364 attended the Delhi meet from Tamil Nadu.

Hubballi: A seventy-five-year-old man from Bagalkot died late night Friday, making him the fourth Covid-19 fatality in Karnataka. Officials clarified that the test samples taken from the man's son have been negative though deceased person had come into contact with him.

The deceased person's burial will take place Saturday in accordance with the strict guidelines laid down for disposal of bodies. A half-kilometer radius around the man's residence has been declared a confinement zone.

Latest: One death each in MP, Gujarat

PTI is reporting two months, citing officials: A 36-year-old government employee died of COVID-19 in Chhindwara, Madhya Pradesh, taking the toll in that state to nine. And one more woman died in Ahmedabad, taking the toll there to 10.

Hyderabad: While Telangana legislators have copped a deep salary cut, there has been no such cut or even a delay in salaries for MPs. The Central government has credited salaries into the account of all MPs on Friday. We have a confirmation of this from Lok Sabha MP from Bhongir, Komatireddy Venkatareddy. Legislators in Andhra Pradesh and Telangana are taking a pay cut of 60 per cent this month.

There is a significant divergence between the numbers put out by the central government and the many independent trackers available out there. Many of  the latter, as the one managed by www.covid19india.org depend on figures supplied by the states.

Look at the latest numbers on covid19india.org. The corona positive numbers are nearly 600 more than the latest figure on MyGov.in, which is 2650. The deaths are higher by nearly 20.

That's because of the lag between state reporting and the centre updating mechanism.

There's a discrepancy relating to individual state numbers too. Either way, it's an alarming picture that's developing. Right there are 10 states with more than 100 positive cases each. 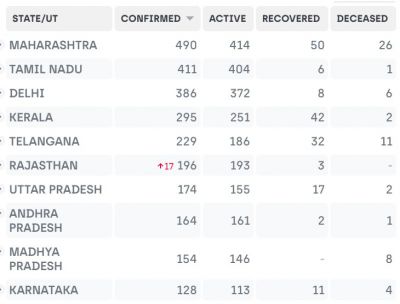 Ahmedabad: Gujarat has broken through to the 100 and above group with 10 new positives reported so far on Saturday. The tally is now 105.

Of these 10 new patients, five are from Ahmedabad, two each from Gandhinagar and Bhavnagar and one from Patan, the state's principal secretary (health) Jayanthi Ravi said.

Most of these are local transmission cases.

Now that we're well and truly into State 3 of the epidemic, Priyanka Gandhi Vadra said Saturday it is now imperative for India to immediately ramp up its rate of testing and that the government must act now for the lockdown to yield results. The Congress gen sec said high rate of testing would reveal precious information about the severity of the disease and disease clusters.

Modi blackout may cause grid collapse

Now here's something for social media to debate. Maharashtra energy minister Nitin Raut says switching off lights simultaneously for nine minutes, proposed by PM Narendra Modi, could lead to a multi-state grid collapse and result in a blackout in the entire country.

Raut appealed to the people to keep the necessary lights on at home while igniting lamps and candles on Sunday as asked by prime minister Narendra Modi.

Now that it's clear that India is going to see a soaring of coronavirus numbers, the Directorate General of Foreign Trade (DGFT) on Saturday put curbs on exports of diagnostic kits with immediate effect.

Until now, these exports were allowed without any restrictions. Putting them under the restricted category would mean that an exporter will now require a licence from DGFT for outbound shipments. 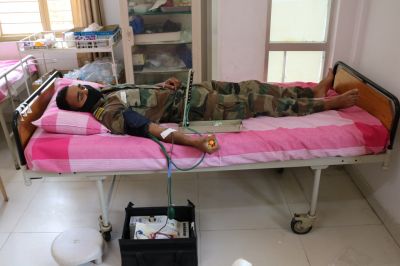 Nobody seems to have thought about it, but what would you do if you needed blood? No one's going to the blood bank for sure. Stepping in to the breach, the the Indian Army undertook a blood donation camp at the request of medical authorities in Bangalore.

The Kidwai Cancer Patients Hospital was facing an acute shortage of blood for patients, accordingly a request for the blood was made to the military. Acting swiftly, a blood donation camp was organised yesterday at MEG Centre  in Bangalore and more than 100 soldiers lay down to give blood.

AP's having a spurt too

Vijayawada: : The Stage 3 surprise has been Andhra Pradesh. After a slow trot, the figures are really galloping. The state has added 16 fresh Covid-19 positive  cases on Saturday, taking its total to 180.

Mumbai: Coronavirus lead state Maharashtra received 47 new positive cases today. The count is now up to 537, officials said. The number till Friday night was 490. As per updates given by the public health department, in Mumbai there were 28 new patients in the last 12 hours, 15 in the Mumbai metropolitan region (excluding Mumbai), two in Pune and one each in Amravati and Pimpri Chinchwad.

Read this, it'll all fall into place

Contrary to what is being taught at WhatsApp University, the government is not acting randomly but according to a coherent plan to tackle the Covid-19 breakout. The plan was uploaded to the Ministry of Health and Family Welfare's website today. The sequencing of steps taken by the government so far are clearly traceable to this plan. You can see it here.

As per the steps laid out in this plan, we are entering stage 2 of the epidemic, during which we'll see a spurt in cases due to local transmission of the virus. Thus in this stage the daily increases will be by the dozens rather than by the hundreds. That's still to come in Stage 3, characterised in the plan as "Large outbreaks amenable to containment."

What it means is that we're in for large breakouts over a wider geographic area such as entire streets and neighbourhoods. And how will that be contained?

As per the plan, we'll see

*Geographic quarantine by defining an area
• Active surveillance for cases and contacts in the geographic zone
• Testing of all suspect cases, high-risk contacts and people with severe acute respiratory inflammation.
* Creation of COVID-19 hospitals and dedicated blocks
* Hospitalisation of all suspect cases
• Stricter perimeter control
* Treatment of hydroxy-chloroquine to all asymptomatic healthcare workers and household contacts
• Intensive risk communication through media

So that puts a lot of things into place, doesn't it? The conversion of railway coaches into hospitals, the PM's diya jalao appeal, etc?