In what comes as now expected, Xiaomi has emerged once again as the number one smartphone manufacturer in terms of sales in the second quarter of 2018. However, this time, it’s not alone — India’s previous market dominator Samsung is up there sitting alongside Xiaomi, both comprising of a total of 60 per cent of India’s smartphone market share in Q2 2018.

According to the latest report by Canalys, Xiaomi and Samsung have emerged as the dominant players in the second quarter of 2018, each comprising 30 per cent of the overall market. Vivo finishes third, with a market share of 11 per cent whereas OPPO follows with a share of 10 per cent. 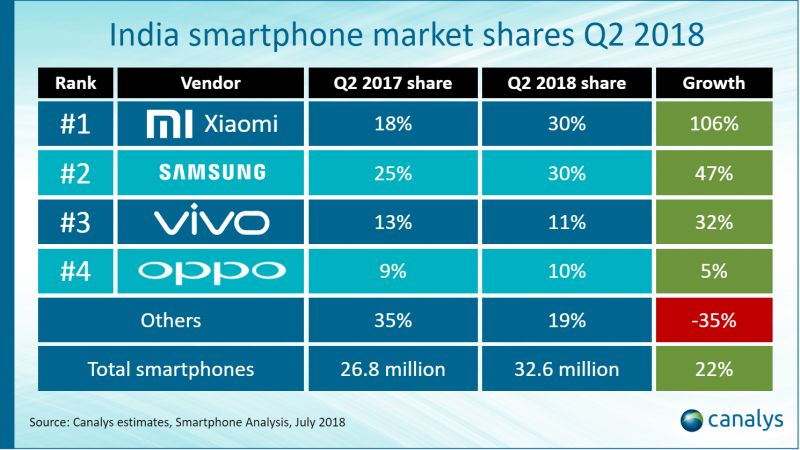 The report mentions that Xiaomi and Samsung shipped 9.9 million units each this quarter. TuanAanh, an analyst at Canalys says, “Samsung is hitting back. It has launched devices pitted directly against Xiaomi’s portfolio and is focusing on its camera and imaging capabilities with Portrait Dolly and Background Blur Shape functions.”

The research states that Samsung’s Galaxy J2 Pro sold 2.3 million units, sitting as the South Korean’s top-selling model. On the other hand, Xiaomi shipped around 3.3 million units of its entry-level Redmi 5A smartphone. Compared to Q2 2017, Xiaomi’s sales have grown by a whopping 106 per cent, beating Samsung’s figure of 47 per cent. Overall shipments on Q2 2018 grew by 22 per cent when compared to last year.

Despite consumers wanting to upgrade to premium devices, a majority of India’s population still relies on the entry-level budget Android smartphones. Xiaomi’s popularity has been growing in the market, largely due to devices that are tailored for the Indian masses — better specifications and attractive prices. Samsung meanwhile has been banking high on its robust supply chain and a strong customer service backup to win favour with the offline audiences.