BVR Mohan Reddy: A living example for success by design
Technology Other News 04 Mar 2017 Google’s AI is ...
Technology, In Other News

Google is off to a very promising start, and Google hopes by sharing their work, they will be able to accelerate progress in this space.

A pathologist’s report after reviewing a patient’s biological tissue samples is often the gold standard in the diagnosis of many diseases. For cancer in particular, a pathologist’s diagnosis has a profound impact on a patient’s therapy. The reviewing of pathology slides is a very complex task, requiring years of training to gain the expertise and experience to do well.

Even with this extensive training, there can be substantial variability in the diagnoses given by different pathologists for the same patient, which can lead to misdiagnoses. For example, agreement in diagnosis for some forms of breast cancer can be as low as 48 per cent, and similarly low for prostate cancer. The lack of agreement is not surprising given the massive amount of information that must be reviewed in order to make an accurate diagnosis. Pathologists are responsible for reviewing all the biological tissues visible on a slide. However, there can be many slides per patient, each of which is 10+ gigapixels when digitized at 40X magnification. Imagine having to go through a thousand 10 megapixel (MP) photos, and having to be responsible for every pixel. Needless to say, this is a lot of data to cover, and often time is limited. 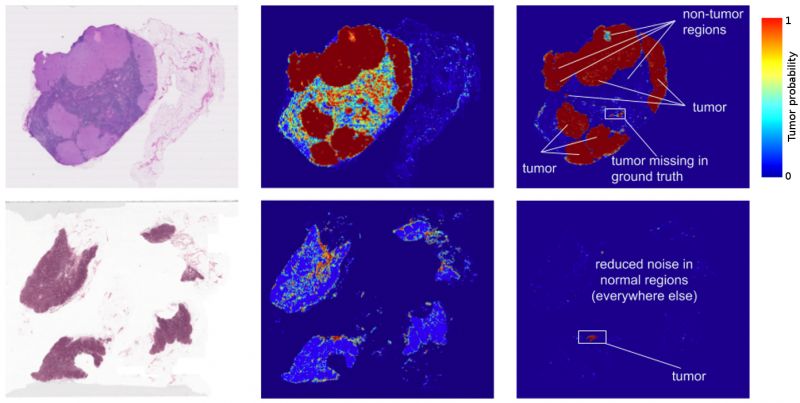 To address these issues of limited time and diagnostic variability, Google is investigating how deep learning can be applied to digital pathology, by creating an automated detection algorithm that can naturally complement pathologists’ workflow. Google used images (graciously provided by the Radboud University Medical Center) which have also been used for the 2016 ISBI Camelyon Challenge1 to train algorithms that were optimized for localization of breast cancer that has spread (metastasized) to lymph nodes adjacent to the breast.

The results? Standard “off-the-shelf” deep learning approaches like Inception (aka GoogLeNet) worked reasonably well for both tasks, although the tumour probability prediction heatmaps produced were a bit noisy. After additional customization, including training networks to examine the image at different magnifications (much like what a pathologist does), Google showed that it was possible to train a model that either matched or exceeded the performance of a pathologist who had unlimited time to examine the slides.

In fact, the prediction heatmaps produced by the algorithm had improved so much that the localization score (FROC) for the algorithm reached 89 per cent, which significantly exceeded the score of 73 per cent for a pathologist with no time constraint2. Google is not the only ones to see promising results, as other groups were getting scores as high as 81 per cent with the same dataset. Even more exciting for us was that Google’s model generalized very well, even to images that were acquired from a different hospital using different scanners. For full details, see Google’s paper “Detecting Cancer Metastases on Gigapixel Pathology Images”. 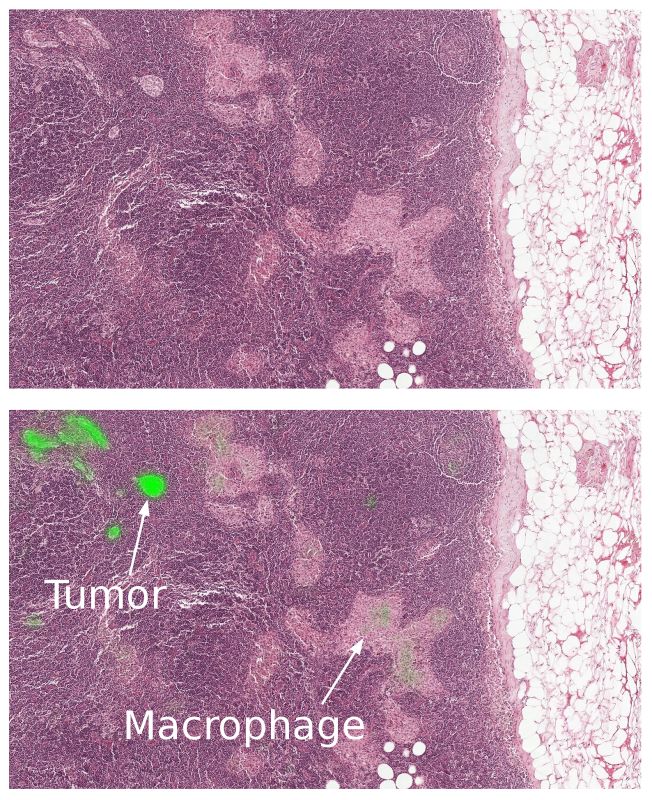 While these results are promising, there are a few important caveats to consider.

Training models is just the first of many steps in translating interesting research to a real product. From clinical validation to regulatory approval, much of the journey from “bench to bedside” still lies ahead — but Google is off to a very promising start, and Google hopes by sharing their work, they will be able to accelerate progress in this space.