India vs Australia: Here’s how Ranchi pitch might behave

Ranchi: As much as on the field battles between players have drawn a lot of attention in the ongoing four-match Test series between India and Australia, the pitches have generated a lot of interest and debate amongst cricket fraternity. And while the teams, as indicated by BCCI and Cricket Australia, have moved on from the DRS controversy that enveloped the second Test in Benagluru, it is unlikely the discussions on the pitches will take a break.

If anything, there will be an increased focus on the Jharkhand Cricket Association Stadium pitch in MS Dhoni’s hometown Ranchi which is hosting its first Test. Especially after ICC match referee for first two Tests, Chris Broad, rated Pune pitch “poor” and Bengaluru pitch “below average”.

Former India skipper Dhoni – who would miss witnessing his home ground’s debut Test match due to Jharkhand’s captaincy duty in Vijay Hazare Trophy – was earlier seen with the curator during the preparation of the pitch.

Going by the pictures doing the rounds on social media, the Ranchi pitch looks heavily designed to assist spinners, with dark patches across the pitch. The texture suggests that it will have very little to offer for the pacers 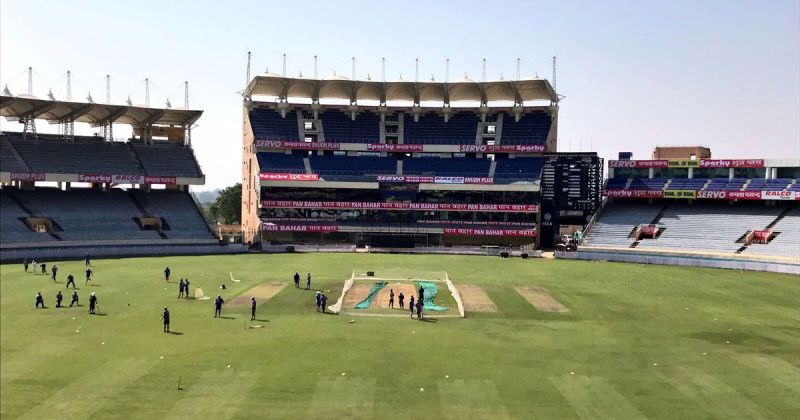 Australia skipper Steve Smith was surprised by the appearance of the Ranchi pitch.

"I’ve never seen a wicket that’s looked quite as dark as that one is," Smith was quoted as saying by cricket.com.au. "It looks like there’s mud sort of rolled together.

"It looks a bit different but having said that both teams have to play on it. It’s twenty-two yards and we’ve played on some difficult wickets in the first two games and we’ve played some pretty good cricket, so we’re confident that we can play with whatever this wicket does," added Smith.

After the Bengaluru win, Indian captain Virat Kohli had said that the nature of Ranchi pitch is known to all and that it was more important to work on the mental aspects of the game.

■India vs Australia: Virat Kohli and Co aim to tame Aussies in MS Dhoni’s backyard
■Virat Kohli has 'no regrets' over Australia bust-up