'Wahab Riaz was ruled out of ICC Champions Trophy after sustaining an injury during the India-Pakistan clash on June 4. (Photo: AP)

Mumbai: As Wahab Riaz recovers from the injury he sustained during Pakistan’s opening game of ICC Champions Trophy against the arch-rival India, it seems he will have something else to deal with, in addition to fitness. The left-arm pacer, in first of its kind incident, was put on sale on the e-commerce website eBay. 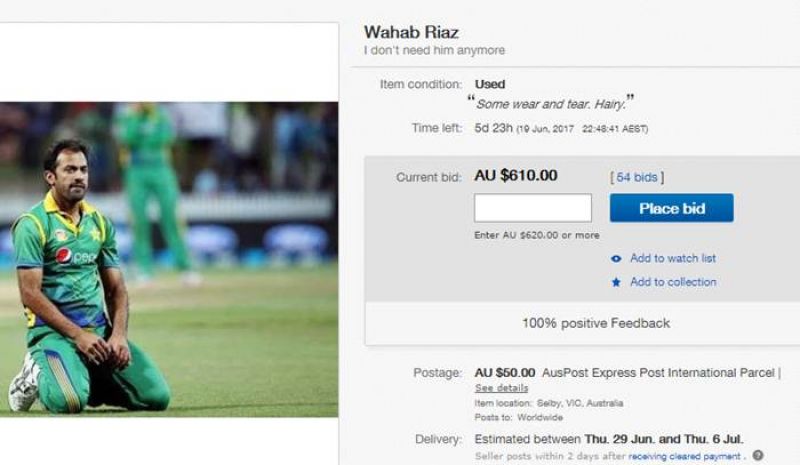 The Pakistani pacer continues to have good pace and on his day trouble the best of the world batsmen. However, he has not been a consistent performer. The same traits were visible during the India-Pakistan clash on June 4 as he dished out some bouncers but leaked 87 runs to become the most expensive bowler (in a match) in the history of Champions Trophy.

While eBay removed the said item from the list, it had received over 50 bids with one of the users bidding as much as 610 Australian dollars.

The user described the item condition “used” before adding “Some wear and tear. Hairy”. The user also said that the item (read Wahab Riaz) “would make a good paper weight or garden gnome” and also said “I don’t need him anymore” as his reason to sell Wahab.

Pakistan will square off against hosts England in the first semifinal at the Sophia Gardens in Cardiff on Wednesday.