Yuvraj, often dubbed as ‘The Comeback King’ has not played an ODI for over three years, he last represented India in ODIs in 2013 against South Africa. (Photo: AP)

Mumbai: Veteran Yuvraj Singh and Ashish Nehra are back into the Indian squad after nine months. The all-rounder has been picked for ODIs and T20s against England, while Nehra made the cut in the T20 squad.  The duo last played for India in the World T20 in March, 2016.

The southpaw is exhilarated with his comeback and is also in mood for some fun. Yuvraj, 35, on Monday shared a funny meme on his Instagram which compares both the comeback players to the banned Rs. 500 and Rs. 1000 notes. Taking the joke sportingly, the batsman wrote, “Good one! Whoever made this.” 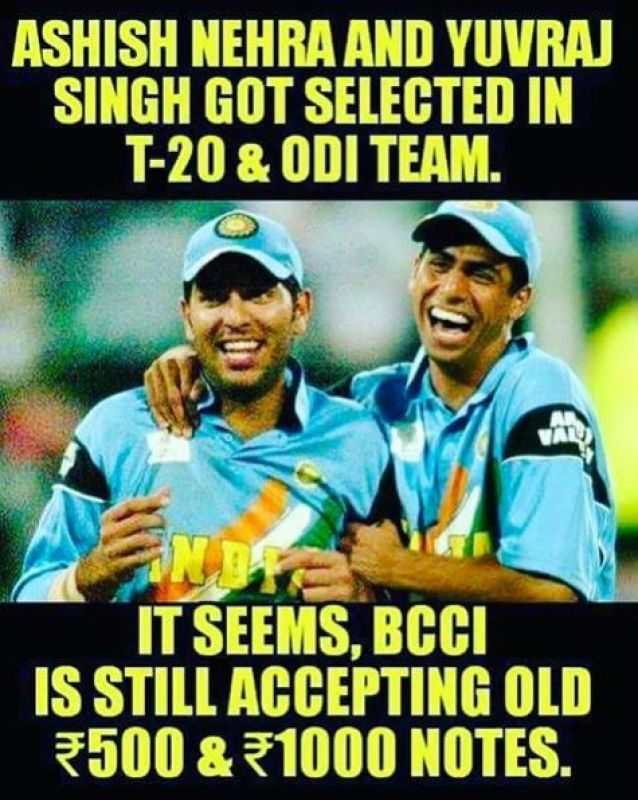 India implemented the demonetisation policy on November 09, 2016, ceasing the usage of all Rs. 500 and Rs. 1000 notes as legal tender.

In fact, Yuvraj, often dubbed as ‘The Comeback King’ has not played an ODI for over three years, he last represented India in ODIs in 2013 against South Africa.

Yuvraj could not contain his joy after he was picked in the Indian side for the ODI and T20 series against England. The star Indian cricketer and a hero of India’s World Cup-winning campaign though had to delete a tweet after the news of his comeback broke.

The batsman had a solid Ranji Trophy season wherein he scored 672 runs from 5 matches for Punjab. He did not take any part in the remainder of the season as he got married with Hazel Keech. However, the selectors were impressed with Yuvraj’s form and picked him for the England series.