MK Stalin has an edge in Kolathur

Stalin promised to give patta lands to the poor people.

CHENNAI: Despite many unsolved woes and unfulfilled poll promises in DMK treasurer M.K. Stalin’s constituency Kolathur, he seems to have won people’s hearts through his programmes to stay in touch with them, efforts to listen to their grievances and solve them.

However,  he has a tough local candidate J.C.D. Prabhakaran, known to be a giant killer, who defeated DMK general secretary K. Anbazhagan in Villivakkam. Prabhakar was an MLA of  Villivakkam from which the Kolathur constituency was carved out in 2011 and enjoys good support among the local AIADMK cadre and followers. DMDK has fielded P. Mathivanan and BJP candidate is state secretary K.T. Raghavan. The PMK which has a presence in the constituency has pitted S.Gopal.

Kolathur is an underdeveloped constituency with a large number of unorganised workers,  daily wage labourers and middle-class people. People have complaints of land encroachment against a few local DMK functionaries.  Anandhan, a resident of G.K.M. Colony, said “Stalin promised to give patta lands to the poor people.

But, he was not able to fulfill the promise, as many DMK functionaries have encroached lands in the area. There are encroachments in Muthumariamman temple pond and Vannankottai kulam. No steps have been taken to evict the encroachers and such encroachments are causing floods in the area”.

Some of the unfulfilled promises are modernization of Periyar Nagar hospital, construction of community centres, engineering college in Kolathur, improvement of government schools,quality playground, solution of drinking water problems, bridges in Retteri and Villivakkam.

However, DMK district secretary P.K. Sekar Babu, who is in charge of DMK campaign, blamed the officials for stopping and delaying many projects for the area. He said, “Stalin has obtained sanction from the Union government for the construction of the Villivakkam flyover and the construction of Rettri flyover is being deliberately delayed by the state government officials”. 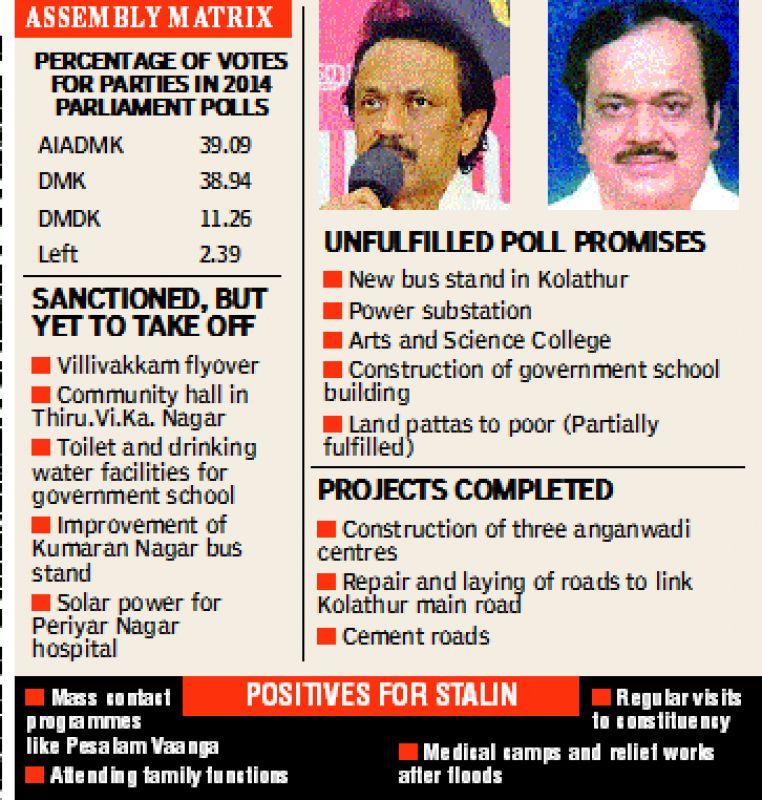 He said, “We are seeking votes from the public to continue and complete all the schemes taken up by Stalin. If we are voted to power again, we will certainly complete all the projects and schemes, besides solving all the civic issues. As far as the encroachments are concerned, Stalin will take action to remove them. He has never supported any illegal activity and take proper legal action”.

Stalin is the first MLA after the constituency was formed.  In the 2014 Parliament elections, the DMK was behind the AIADMK in the Kolathur Assembly segment.  This time, AIADMK nominee Prabhakaran is banking on the freebies given by the AIADMK government and the impression that AIADMK would come to power again. The ruling party is campaigning around the area saying that only a ruling party MLA could solve their problems citing Stalin’s remarks that he was not able to deliver his promises as he was in opposition.

But, people are happy with Stalin as he is in constant touch with them through programmes like ‘Pesalam vaanga’. He is also attending family functions in the area, sometimes with his wife Durgavathy Stalin. He has given a mobile number to contact him and air the grievances any time and people say action is being taken on most of such complaints. Besides, every house in Kolathur gets a greeting card from Stalin for Pongal.

BJP eyes 60 LS seats for 5k minority members in each