New Delhi: Amidst allegations and counter claims on the inclusion of a Dalit member in the committee to probe the suicide of HCU Dalit scholar Rohith Vemula, Union Minister for Human Resource and Development, maintained that he was not denied scholarship.

“The impression being created that Rohith was denied his scholarship money is wrong. Rohith is deceased and it's best we don't read the FIR report in Parliament. His mother's only plea was that a judicial inquiry made into his death and justice be served. The allegation that there was no SC member in the executive council probing the suicide is also incorrect,” Irani said.

The Minister said that she was a "practising Hindu and Goddess Durga worshipper".

"I read it because I was asked to explain what is the truth. I said it with a lot of pain. I myself am a practising Hindu, I myself am a Durga worshipper. These are authenticated documents from the university itself," Irani said. However, the opposition continued to demand for an apology.

Here are the latest updates:

15.17 pm: Countering Irani’s clarification that there was a Dalit member in the probe committee looking into Vemula’s suicide, Sitaram Yechury said “Minister says there was a Dalit professor in the committee. But he gave a dissenting note and quit… Who is a good Hindu? Will they give certificates? Why is all this being brought up to divide country?”

15.15 pm: Responding to Sitaram Yechury’s allegation that Smriti Irani was making all that is foul, fair without any authentication, Union Minister Arun Jailey said “Every word the minister has spoken has been authenticated.”

15.09 pm: “Facts are distorted. Without verification of any facts, nothing should go on Parliament,” said CPI(M) Sitaram Yechury in Lok Sabha.

14.51 pm: Calling bluff on Union Human Resource Development Minister Smriti Irani's claim that the probe panel looking into the death of Dalit schola Rohit Vemula included Dalit member, BSP supreme Mayawati said “I am not satisfied with the answer of HRD Minister, the truth is that the inquiry committee has no Dalit member. There is no intention of giving justice to Rohith Vemula.”

#LIVE: Dalit member on the #RohithVemula probe panel not co-opted by State: Mayawati

Alleging that it was the government's intention to deceive dalits, Mayawati added "The Dalit member that the Union Minister claims to be in the probe panel was not co-opted by the state. Because of this we think that this probe committee can never conduct a fair inquiry into Rohith’s death."

Rohith's brother must have been given a job instead of the political drama that  ensued, she added. 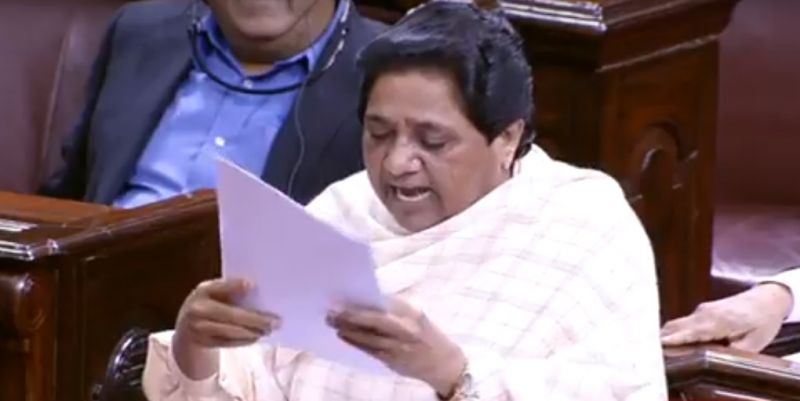 12.45 pm: The poor opened bank accounts in Jan Dhan Yojna hoping that 15 Lakh will come into their account, not even 15 Rs came-Sultan Ahmed, TMC in Lok Sabha

12.25 pm: This was pre-planned conspiracy to finish off political opponents. Reports say the affidavit was changed at the political level, says BJP leader Anurag Thakur in Lok Sabha on Ishrat Jehan.

11.34 am: CPI(M) leader Sitaram Yechury said, “Union Minister Naqvi should withdraw for saying that we don't allow legislation work to happen in the Rajya Sabha”.

11.30 am: Any blasphemous remark will be removed, says Rajya Sabha Deputy Chairman.

"I am worshipper of Goddess Durga," says Smriti Irani amid ruckus in House

11.25 am: Explaining why Smriti Irani made a reference to Goddess Durga, she said, "I read the documents because I was asked to explain what is the proof".

#LIVE: Dalits have been insulted by the government, and this will not be tolerated by my party: Mayawati #RohithVemula

#NewsAlert: I myself am a Durga worshipper, I said it with a lot of pain: Smriti Irani in Rajya Sabha

11.20 am: Smriti Irani must apologise unconditionally, says JD(U). “If Smriti Irani doesn't apologise, then the House may not be able to run,” said JD(U) leader KC Tyagi.

11.05 am: Anand Sharma called Smriti Irani’s comments blasphemous. “We as members take oath to uphold Constitution. Constitution of India does not allow anything which can be said or uttered that can be blasphemous,” he said.

Padma Vibhushan to Mulayam a mockery of his stature, contributions: SP Leader