Chennai: Despite the Tamil Nadu government's debts mounting to over 2.52 lakh crore, the expenditure of the government is rising every day, at the expense of allocation for key areas like education, health and infrastructure.

The total expenses on populist schemes have gone up to Rs 5,472 crore every year, besides the subsidies and grants which stands at 68,211 crore as per the revised estimates for the financial year 2016-17. 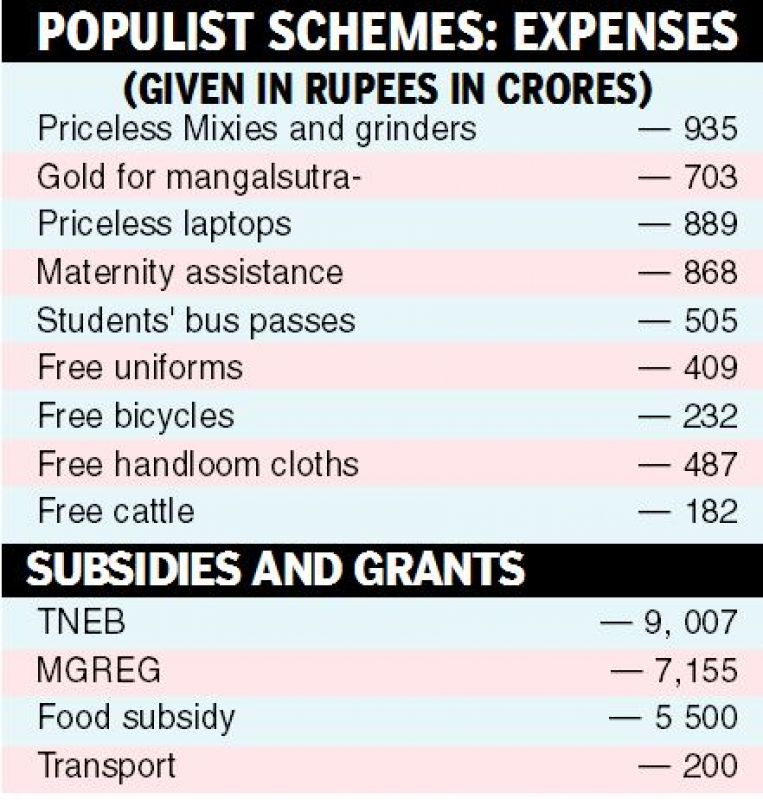 The amount spent on distribution of mixies and grinders takes up Rs. 935 crore every year and the eight grams of gold scheme for marriage comes to Rs 703 crore, while the free distribution of laptops are given at a cost of Rs 889 crore. At present Rs 668 crore is spent on maternity assistance scheme and Rs 505 crore on free and concessional bus passes to students.

The state government is spending Rs 487 crore for free distribution of handloom cloth, Rs 409 crore on uniforms to students and Rs 264 crore on free supply of text books for students, besides giving free bicycles at a cost of Rs 232 crore. For rural people, sheep, goats and milch cows are given at an estimate of Rs 182 crore every year.

Among the subsidies, the one given to Tamil Nadu Electricity Board tops the list with Rs 9,007 crore and the MGREG scheme is given a subsidy of Rs 7,155 crore, while Rs 5,500 crore are given to food subsidy. Besides, transport depart gets a subsidy of Rs 200 crore on diesel.