The notice was sent following a complaint about a passage from his book Smashanangalude Notupusthakam. (Photo: DC file)

Thiruvananthapuram/Kozhikode: There was utter chaos over the case against Kamal C. Chavara, a novel writer who was taken into custody by the Nadakavu police on Sunday for defaming the national anthem. Even though friends of Mr Kamal claimed that the police has registered a case under Section 124 A (sedition), sources in the police maintained that only verification was being conducted, on the basis of a complaint received by the police. Kollam city police commissioner Satheesh Bino told this newspaper that the notice was sent to Mr Kamal under Section 124 A. Mr Kamal was taken into custody and later set free. The police would first verify the authenticity of the complaint against Mr Kamal before arresting him, Mr Bino said.

The notice was sent following a complaint about a passage from his book  Smashanangalude Notupusthakam. The passage reads thus: “A school in Kerala has 44 students named after the 44 rivers of Kerala, which have all dried up. The teachers of that school never used to pay heed to the requests of the children, including permission to go to the toilet for urinating. At 4 pm every day, these students had to stand up for the National Anthem. As urinating was more important for me than Jana Gana Mana, I  preferred to be an indisciplined student.” 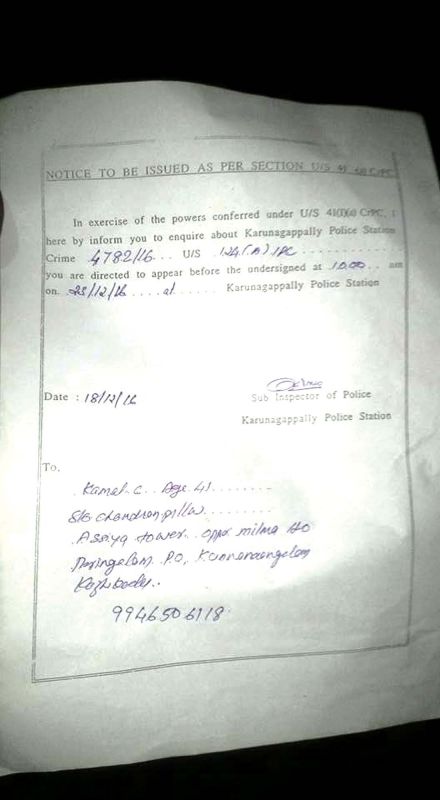 Copy of the complaint

Apart from that Mr Kamal had also posted a portion of his upcoming novel Sashiyum njanum, which the complainant claimed was against the national anthem. Kerala police sent a notice to him on the complaint of a yuva morcha activist, and the police raided his home in Karunagappally. He was initially asked to come to Karunagappally police station. However, the police took him into custody in Kozhikode on Sunday morning. Mr Kamal in a Facebook post had earlier claimed that the Karunagappally police had raided his house and threatened his father who is heart patient and took into custody, CDs and the copy of his novel.

Kamal was taken into custody from Eranhipalam near Kozhikode when he was coming from his home at Kunnamangalam, where he lives with his wife and a newborn baby. Nadakkavu police said that Kamal was under their observation till the Karunagapally police reached here and later he was handed over to them. A day earlier we were directed to track Kamal and we were tracking him since then, police added.

Now, book Hyd metro tickets at your fingertips, on WhatsApp

KCR to address public meeting at Chandur on Thursday