Use less water, or else

Thiruvananthapuram: The Kerala Water Authority has issued guidelines on the  usage of water  and  warned of strong  action to curb its misuse in the wake of the severe drinking water shortage. It has imposed a 25 percent cut  in the water supplied to Thiruvananthapuram  and enforced restrictions in the supply between 6 a.m. and 6 p.m.  The use of drinking water by car service centres and construction sector has been banned.   The  KWA has formed squads to detect water theft and warned of  criminal cases and disconnection of supply in such cases.     Those who use more than two lakh units of water for industrial purpose have been asked to reduce the consumption by 50 percent, said Water Resources Minister Mathew T Thomas. Though Palakkad, Malappuram and Kasargod have been hit by water shortage,  Thiruvananthapuram district is the worst hit, he said.

The valves in low-lying areas will be adjusted to take   water to elevated places. Kiosks will also be set up there. Fines up to Rs 50,000 will be slapped for unauthorised use of pipelines. Household connections with over six months’ payment dues  and non-household connections with over two months’ dues  will be disconnected without prior notice. The supply for consumers who have not replaced dysfunctional water metres will be cut,  KWA sources said. Pumping of water from pipelines using motors and illegal water extraction for use in hotels, hospitals, lodges, wedding halls, shopping complexes  and houses will be treated as an offence, sources said.

The government is planning to install well-recharge systems in government buildings as part of the Haritha Keralam  programme.  This  will be implemented with the support of local bodies and NGOs.   Restrictions have also been impo-sed on the diggi-ng of bore-wells.  The government has also for-med an exp-ert committee to exp-lore the possibility of implementing Banas-urasagar, Karappuzha, Edamalayar and Muvat-tupuzha irrigation schemes with necessary changes.As the water level at Peppara dam is dipping, the KWA  is planning to bring water from Neyyar to Aruvikkara. The water from Peppara is released daily to Aruvikkara reservoir from where it is supplied to the city now.  Water from Neyyar will be brought using pipes from Kappukattu reservoir to Aniyilkadavu. Mr Mathew T. Thomas visited the Kappukattu reservoir and Neyyar reservoirs on Tuesday to study the possibility.

However, experts point out that the present crisis could be solved through reuse of water. Fr Jioj Kurian, an environmentalist, told DC that  80 percent of the water  used in households could  be  used again.   Even water from bathrooms or flush can be used for purposes like watering plants, Fr Kurian said.  “We should not think of water conservation only at a time when there is  scarcity. Efforts should be taken to preserve water when it is available,” Fr Kurian said. Meanwhile, the CBSE regional office has asked the  CBSE schools in the state to ensure clean drinking water to the students  following a directive by the Kerala State Commission for Child Rights.   The commission  had earlier ordered all schools in the state to provide drinking water, water in toilets and fans in classes in the wake of the summer season. The commission had conducted a survey in selected schools and studied  media reports on the shortage of water in educational institutions  and anganvadis before issuing the order.

Thiruvananthapuram city which was enjoying round-the- clock water supply till last week has begun water rationing with the state facing a severe drought. Unless Keralites control the lavish use of water,  they will not have enough water to drink, says Water Resources Minister Mathew T. Thomas.   Some small steps will help us sail past the drought.

1. Fix the leaks: Consumers should close all the taps for some time  and check water  meter  to ensure that there is  no leak. Around 75 litres of water will be lost a day if a drop is wasted every second.

2.Use mug to brush, shave: Use a mug of water for shaving and brushing teeth..

4. Use efficient shower: Malayalis  who love  bucket baths do not save water. A short bath using an efficient shower head might save more water. Modern aerator showers can also fetch returns in terms of water bills in the long run.
5. Use basin to wash veggies: Use basins to wash vegetable instead of holding them under running water tap.

8. Minimal use of detergents: Use only minimal detergents during machine and hand wash.

10. Use brooms, not hose: Use broom to clean exteriors of houses.

The health department has issued an advisory to the people on the consumption of water to prevent the outbreak of diseases in the wake of the summer heat and shortage of water. Kozhikode district medical officer Asha Devi said, “proactive adaptation measures are required to cope with the hotter, longer and deadlier summers  under a changing climate. This implies policy intervention and coordination among the health, water and power sectors.”

“Dehydration is a key outcome of heat exposure which can cascade into life-threatening conditions and ultimately death. Timely access to drinking water can help mitigate this escalation. In areas where heat extremes coincide with water scarcity, the risk of heat-related illness remains high. At the same time, we want  the common man to get access to cool environment, which remains the mainstay of preventing heat stress,” she said. Many juice shops in the city are using  ice cubes that are used to store fish. This contaminated ice cubes  will affect the health  and  hence people should  use lukewarm water rather than water from outside. The source of water used by these shops is a big problem, she said. The health department and the Food Safety Standards Authority of India will organize a statewide  drive to prevent the outbreak of  waterborne diseases. The department has also asked the people  not to work outside from 12 noon to 3 p.m. to avoid heat stroke.

The Kerala Water Authority may consider actions against car wash centres that ‘waste’ drinking water during the drought situation. As per conservative estimates,  around 150 litres of water will be used for a car wash. The figures will come down in the new age wash centres that use imported devices. “Car wash centres that have KWA connection should use wells or other water bodies. We do not supply purified water for vehicle washing purposes. This applies to even households and we have issued clear directions in this regard,” said a KWA assistant engineer.  Up to Rs 50,000 can be levied from offenders. 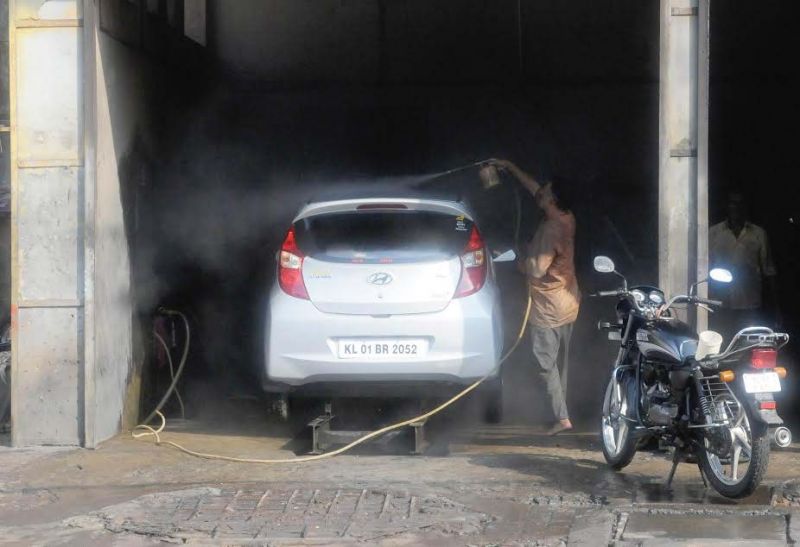 The water from service centres has  diesel as well as shampoo content in it making it expensive to re-cycle the water. “Our automatic car wash centre has a recycling facility. Around 90 per cent of the water can be recycled in the plant imported from Germany. We hardly need 10 litres of fresh water to spray shampoo. This might go up in old service stations, particularly in places where heavy vehicles are serviced,” said the manager of a service centre near Infosys campus. KSRTC, the single biggest operators of vehicles,  has  given contract to tanker lorries to fetch water for servicing. “They deliver water from rivers and canals to storage tanks at central depot. We do not bank on KWA for washing buses,” said a KSRTC official.