Hyderabad: Water year 2015-16 has been bad for Telangana with 20 per cent deficit in rainfall which resulted in a dip in average groundwater level of the state by 2.35 metres below ground level as compared to May 2015 figures, from 13.27 mbgl to 15.62 mbgl. A water year runs from June to May of the next year.

While all districts recorded dip in groundwater level in May 2016 ranging from 1 mbgl to nearly 5 mbgl as compared to May 2015 data, Hyderabad recorded a slight increase of 1.81 mbgl thanks to better rainfall than last water year. While it rained 479 mm in 2014-15 in Hyderabad, in 2015-16 661 mm rainfall was recorded whereas the normal value is 752 mm.

However, it is not just sufficient rainfall which is required for increase in groundwater level. There must also be a decrease in exploitation of groundwater resource, mainly in agriculture. 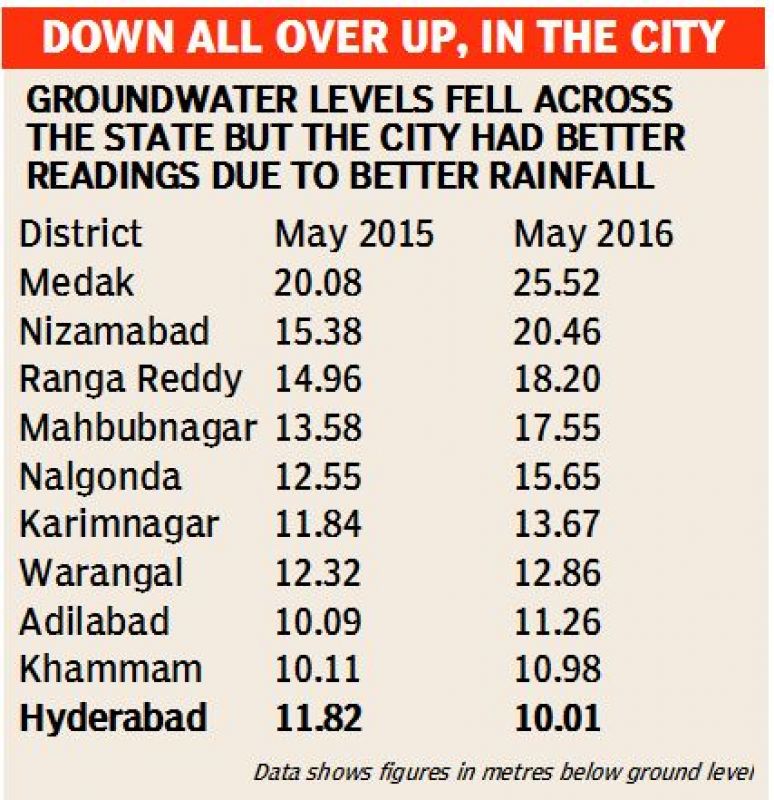 In 2015-16 Medak, Khammam, Warangal and Nalgonda districts recorded higher rainfall than last year and in Karimnagar it was very close to last year's figure. However, thanks to high dependence on groundwater for irrigation this rainfall could not have much impact on groundwater.

In Nalgonda even though it rained 1,068 mm in 2015-16 as compared to 855 mm till May 2015, groundwater level fell from 12.55 mbgl to 15.65 mbgl. The main reason is that nearly 73 per cent of gross irrigated area in Nalgonda is fed by groundwater. The May 2016 report by Telangana groundwater department also found that nine districts in the state have deeper water levels than in May 2015.

'Bharat Jodo Yatra' to target both TRS and BJP in Telangana: Digvijaya, Jairam

Depressed by delay in getting iPhone, teenage girl hangs self in Maharashtra