Bengaluru: More than a 100,000 KSRTC and BMTC employees struck work across the state on Monday, bringing the IT capital to a grinding halt as schools and colleges remained shut and some 600,000 people, without public transport in the city.

At least 1.50 crore passengers have been affected by the bandh across the state with passengers arriving from outside the state at the city's bus stations facing the brunt. Virtually every single KSRTC and BMTC bus station was a sea of people hauling their own luggage, negotiating with autorickshaw and tax-drivers who made a killing, with cab and auto drivers demanding a minimum fare of `100 even for the distance of a kilometer.

Hospitals and railway stations saw desperate patients and new arrivals unable to get around the auto drivers' demands. Most schools and colleges will remain shut on Tuesday and possibly, stay closed till Thursday. At Kempegowda International Airport too hundreds of passengers were stuck as none of the Vayu Vajra buses were in operation. 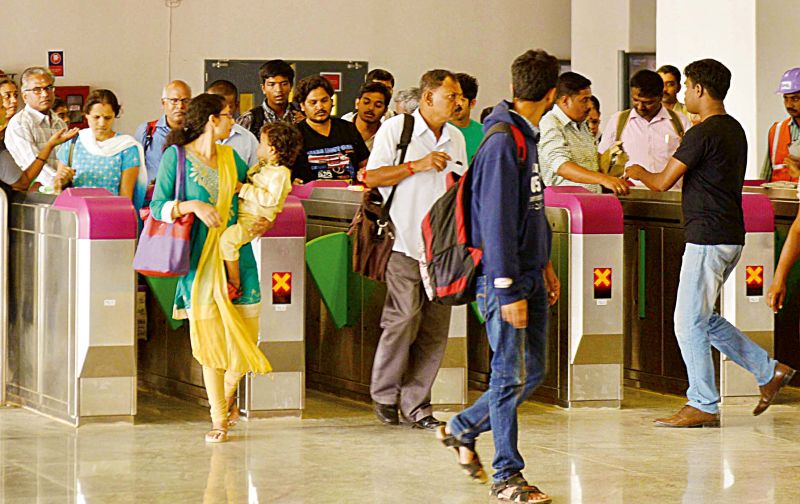 Stranded commuters made a beeline for Namma Metro on Monday (Photo: Satish B.)

State transport minister Ramalinga Reddy and senior officials of both KSRTC and BMTC held several rounds of talks with the labour unions. But while inside sources said that the employees remained adamant on the 35% pay hike demand in public as against the government's offer of a 10% hike, in private, some union leaders told Deccan Chronicle that they maybe willing to reduce it to 30%. As a set of 41 demands were made, government sources said they were trying to break the strike or impose ESMA.

“All the employees of the four state-run transport corporations are ready to go to jail in case the government decides to invoke Esma,” said HV Anantha Subbarao, general secretary, KSRTC Staff and workers federation.

Why no ESMA , Mr CM?
Although the entire state has been hit because of the indefinite strike
called by the BMTC and KSRTC employees, why is the government not invoking Essential Services Maintenance Act (ESMA)? Is the government putting its fear of losing a potential   vote bank over the need to keep the city running?

Counter offer: Sources said both BMTC and KSRTC managements have offered a compromise solution -  crew members salary will be increased by 12.5%, but the government said: "If we increase the salary by 12.5%, we need to cough up Rs 2,000 crore extra every year."

Bigger traffic mess: With the state transport department allowing private buses and mini buses to operate across the state, major roads of the city witnessed major traffic jams through the day, with a traffic cop near Silk Board junction saying that private bus drivers were adding to the chaos by driving recklessly.

Market hit: At City Market, tonnes of vegetables, worth several lakhs was destroyed as there were no buses to transport them.