Hyderabad: The TS transport department on Wednesday finalised the logo that hearing impaired drivers will have to fix on their vehicles.The logo was designed by city-based graphic designer Manikanta Annapragada who was the first person to obtain a driving licence under the ‘hearing impaired’ category in the country.

The logo consists of a hearing impaired mark along with text saying, “Driver is deaf — Please watch out.”The Road Transport Authority has also issued specifications for two-wheelers and four-wheelers. The logo should be four  inches tall and three inches width on the rear side, and three inches tall and two inches wide on the front of two-wheelers. 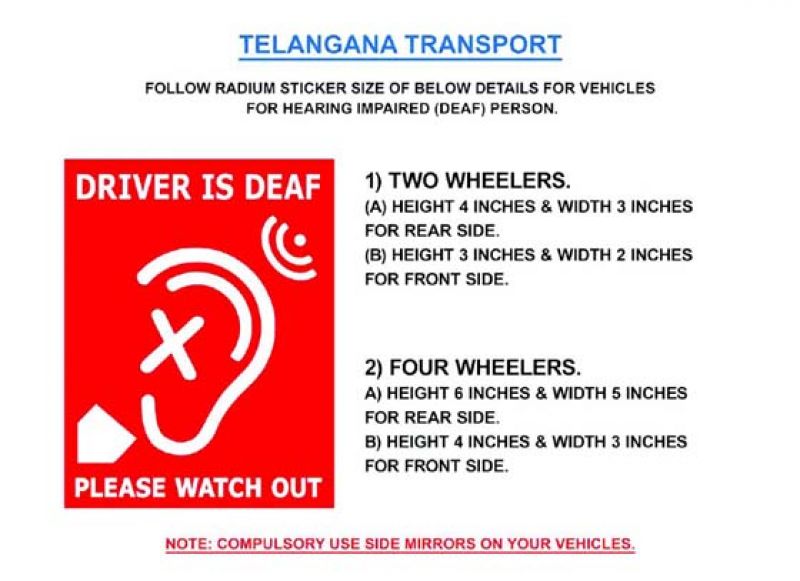 For four-wheelers, the logo should be six tall and five inches wide at the rear side and four inches tall and three inches wide in the front. The vehicles should have rear view mirrors at both sides. Meanwhile, following the news report published in these columns on driving licences to hearing impaired, a few others have booked slots for driving tests.

An official from the transport department said that about 10 persons having hearing disability had booked slots for learner’s licence. Mr Syed Safdar Arish, a web developer from Koti, said that he was hearing impaired and had been driving since 2002. “For driving without licence, I was caught many times by the traffic police. I spoke to inspectors on the spot to help me in getting driving licence as I’m a person with hearing disability.”

“I also told them I have been driving without licence for a decade. But, they said that they can't do anything as rules did not allow. I have to obey the rules and paid fine many times,” he said. After reading the report published in these columns, he said, “I booked slot for driving test.” He was scheduled to take appear for the learner’s licence on Wednesday.