According to a senior I-T official, Health Minister Dr C Vijayabaskar, in his statement given to the officials, reportedly accepted that the money was distributed to voters. I-T officials also leaked out documents containing details of money handled by seven senior AIADMK leaders, including chief minister Edappadi K Palanisami, targeting 85 per cent of voters at the rate of Rs 4,000 per voter, to the media. 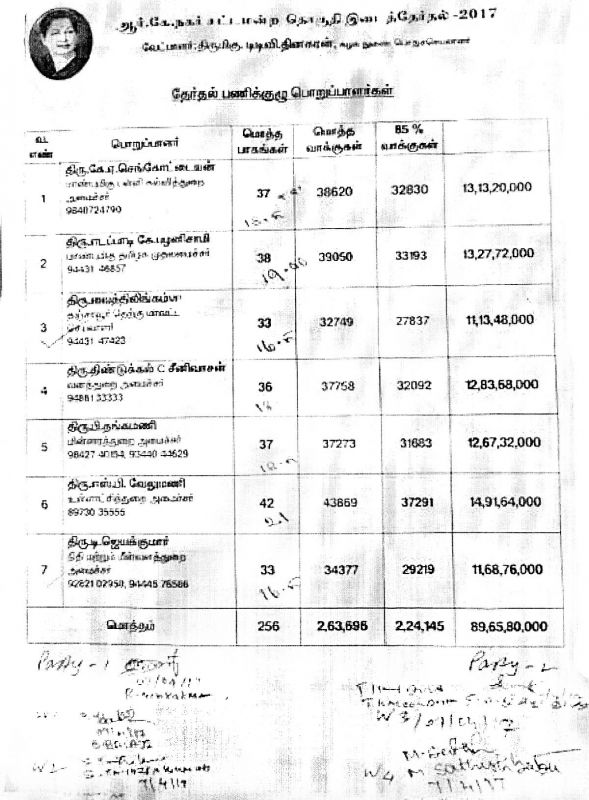 Health minister Dr C. Vijayabaskar was working under SP Velusamy, a document showed. A senior I-T official said that a report on the document showing distribution of money to voters has been passed to the Election Commission of India in New Delhi through the Central Board of Direct Taxes.

"Similar documents were seized from the house of Vijayabaskar, MLA hostel room and a lodge in Egmore during raids. Vijayabaskar had admitted it and signed the document seized from his residence," IT official said. The minister had also tendered an apology for using his driver to throw away certain documents and handed over the same documents later to the I-T investigators.

Income tax officials believe that the money distribution on behalf of T.T.V. Dhinakaran, who is contesting from RK Nagar from Sasikala camp of AIADMK, was almost over because they had been doing it systematically with 7 ministers in control.  The income tax official said that they would certainly investigate the sources of money, the official added.

Meanwhile, the income tax investigators wrapped their raids at the houses of Vijayabaskar and Dr S. Geethalakshmi, vice-chancellor of Dr MGR medical university, on Saturday morning. The raids were on since Friday morning at 35 places across the state and IT sleuths had seized over Rs.5 crore in cash and documents showing cash transactions running into many crores of rupees linked to RK Nagar poll besides gold and property documents.

3 MLAs of AP get infected with Coronavirus