Though women work hard, their hard work is not recognised (Photo: Facebook)

Be it police, armed forces or the bureaucracy, women have been increasingly joining the ranks in every department in order to participate in building a more inclusive and secure society.

But even as women rise up to positions from where they can work towards change, we are faced with a sad reality which reaffirms how patriarchy has penetrated every institution.

While women in bureaucracy and the security establishment have complained of discrimination and interference before, a sub-inspector from Bellari in Karnataka has now voiced her concerns publicly in a Facebook post.

Gayathri Farhan mentioned that "It is difficult to accept women as officers. I am experiencing it since the beginning of my career. Though women work hard, their hard work is not recognised like that of men in the department."

The post had gone viral but was later deleted, here’s what it said.

“It is difficult for people to accept women as officers. I’m experiencing it since the beginning of my career. Though women work hard, their hard work is not recognised like that of men in the department. I took seven years to adjust to the atmosphere in the department. Sometimes a few incidents have brought tears into my eyes. But never showed those tears before anyone thinking that it may weaken me. I have started questioning about the efficiency. It’s difficult for women to prove their existence both in the society and in the professional life. Ultimately it’s a one man army believing in the principle of Do or DIE.” 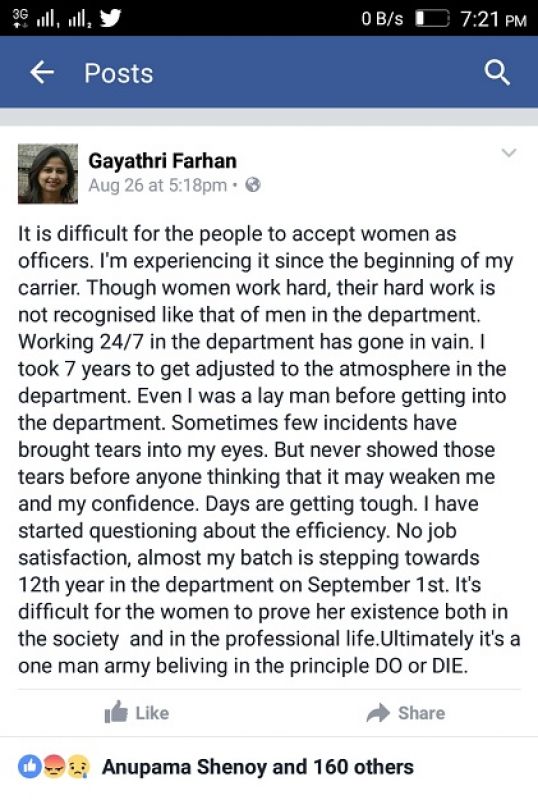