“Lion!” Exclaimed our Masai spotter. We were driving to a nearby town through the Naboisho conservancy and not really on a game drive. Still Masai eyes are always vigilant and our spotter had performed what appears to be magic to untrained eyes.

Our driver too looked to his right, in the direction our spotter was pointing, and took not more than a second to spot the lions. All we could see though was a bush in the savanna, at least a couple of hundred metres away. Still we knew better than to doubt our Masai staff and waited in anticipation as we drove towards the bush.

As we got nearer to it, our guide and spotter got more and more excited. Meanwhile all we could see was… the bush.

We came almost up to the copse before we spotted the big cat, if you can call it that. 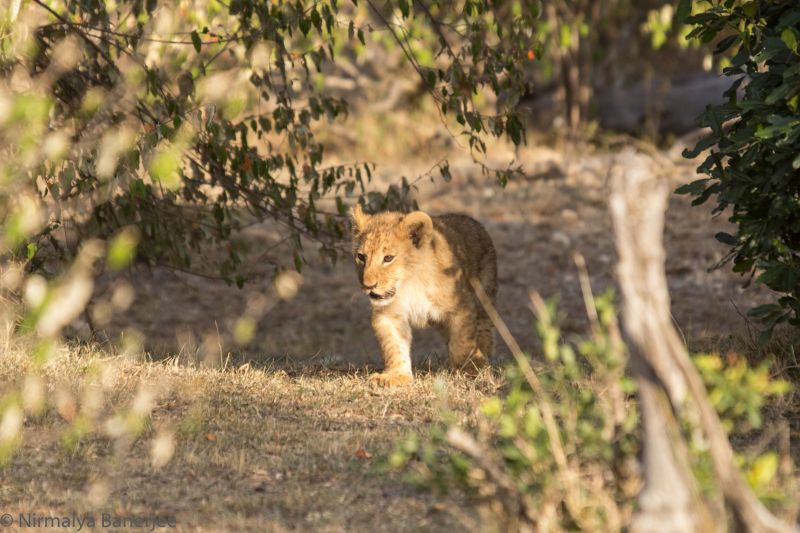 A three-month old cub comes out of the bush. This was at least 200m from the main road and we would have missed this in a National Park. (Photo: Nirmalya Banerjee)

A three-month-old lion cub – about as large as a house cat walked out of the bush followed soon after by its mother. 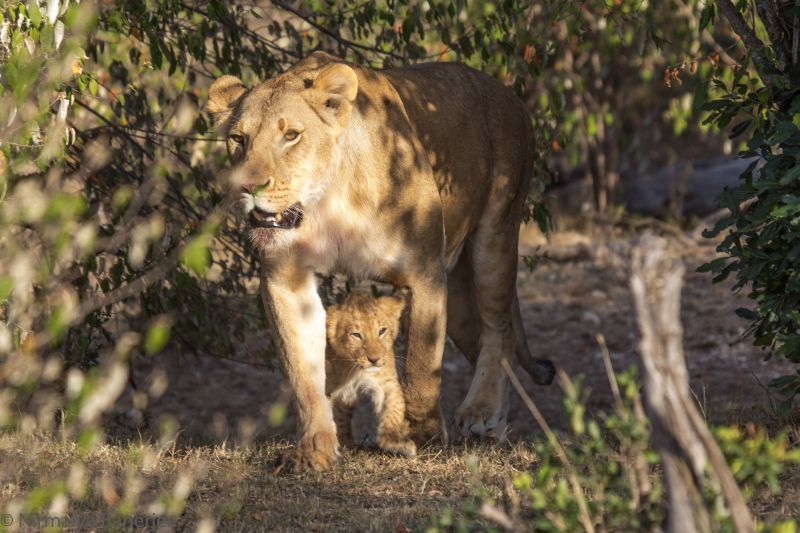 Lioness emerges from a bush along with her cub. You can track wildlife in Private Conservancies because you can go off road. (Photo: Nirmalya Banerjee)

The cub was clearly a bit upset and kept roaring. Only the little big cat’s roars turned out to be squeaks.

I really have no idea why the boy cub was so upset except that perhaps he was protesting about being away from his sister from the same litter. Soon, she too emerged from the thicket and joined the rest of her small family. 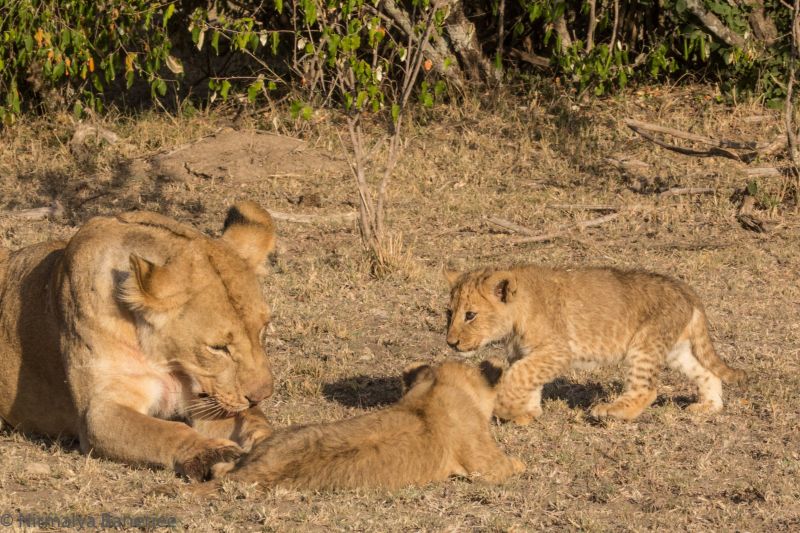 The second cub comes out to join her mother and brother. (Photo: Nirmalya Banerjee)

The lioness then groomed her two cubs... 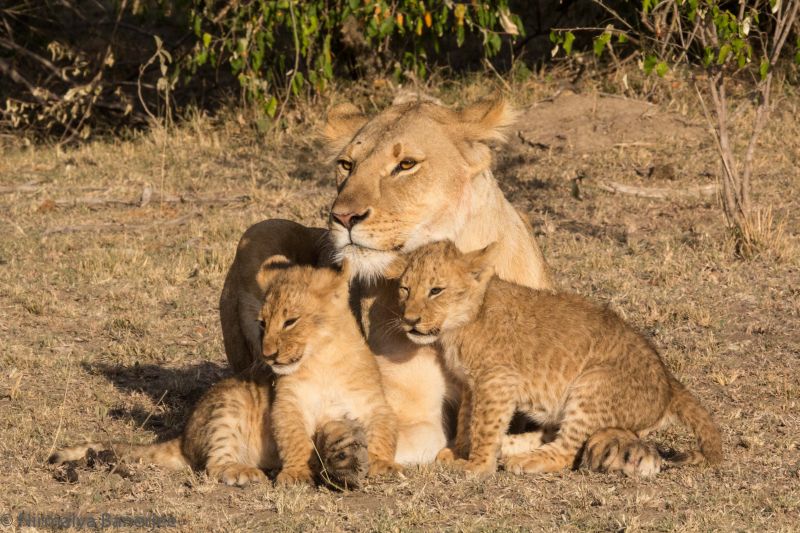 Sampu Enkare pride lioness with her two cubs. We were the only car within sight. In a national park there would have been many safari vehicles jockeying for position. (Photo: Nirmalya Banerjee)

…before continuing her morning walk.

We too had to tear ourselves away and we left the big and not-so-big cats to carry on with their lives, to carry on with ours. As we did so, we looked around. There was not a single other car around.

Indians comprise the third largest market for Kenyan safaris. About sixty thousand Indians visit Kenya each year on visit visas. While it is hard to put an exact number on those who come on safari- as opposed to visiting friends and family- it is estimated that about thirty thousand Indians come on safari each year to Kenya. There is already a thriving domestic wildlife tourism industry in India and as economic growth fuels affordability, an increasing number of Indians is looking to visit Kenya on safari and Indians today comprise the fastest growing large market for Kenyan safaris.

Most Indians end up visiting the national parks and stay at the large lodges within these parks. Most of these lodges are within the parks- unlike in India- and so provide in some ways, a superior wildlife experience compared to the Indian experience. They typically have 50-80 rooms, large buffet meals, grounds and electrified fences on the perimeter. These hotels offer game drives too, but usually guests come by road from Nairobi in vans with flip-top roofs provided by a tour operator and do game drives in these vehicles.

You usually get a two-hour game drive each in the morning and evening. You get good morning drives when the cats are still active but must return before the cats have become active in the evening.

There is though, a lesser known alternative to the large lodges in the parks. Since the first private conservancy opened about twenty years ago, tourists have had the more authentic choice of staying in small tented camps. These typically offer comfortable tents with attached bathrooms. The camps have no fencing and you are accompanied by a guard to and from your tent. Meals are typically sit-down meals rather than buffets, served in the dining tent. These camps usually offer an all-inclusive package with meals, drinks and shared game drives. Since there is no fencing these are not suitable for small children below the age of eight. 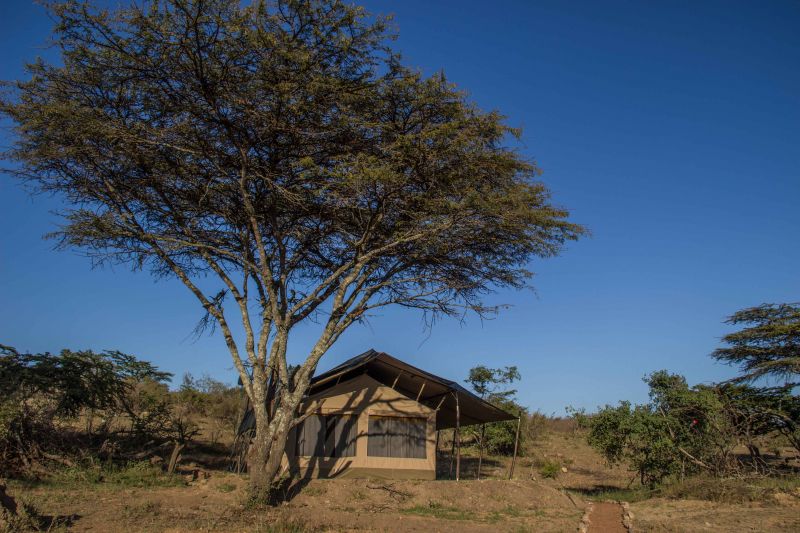 However, the biggest reason to choose this option is the quality of game drives. The drivers are usually expert trackers who can locate wildlife by themselves. And of course, they have current knowledge of wildlife sightings. And when wildlife is spotted, your guide can take you close to it, because of the permission to go off-road. 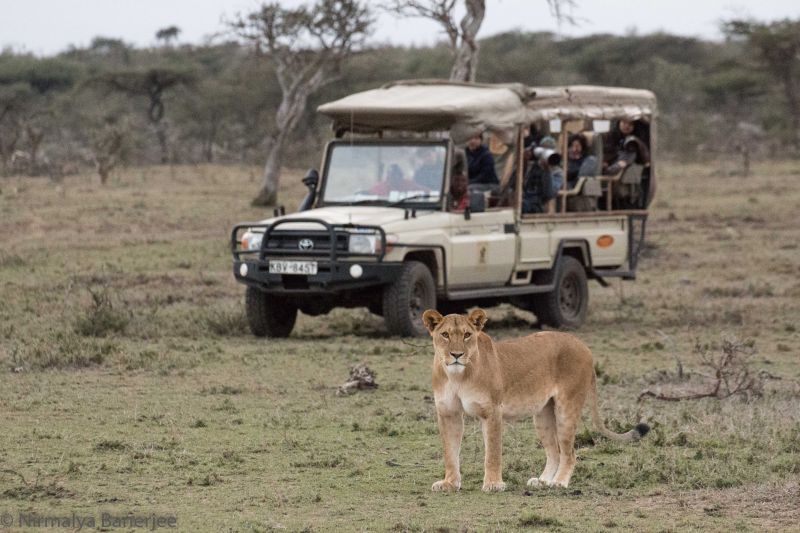 Private Conservancies allow vehicles to go off road to get close to the wildlife (Photo: Nirmalya Banerjee)

And yet the very low tourist density in the conservancies ensures that the environmental footprint of tourism is kept low. In fact, the impact is positive as the private conservancies are on land that was earlier used for grazing livestock and from where wildlife had all but vanished. Kenyan law allows the creation of private conservancies on land leased from the local communities who agree to vacate it in exchange for regular lease payments. Wildlife flows back into the area once the occupants move out. This is one of the very few initiatives globally to expand the area available for wildlife, in a world where that space is continuously shrinking under the pressure of the growth of human population.

I must clarify that staying in the tented camps in the private conservancies typically cost 30-50% more than the large resorts in the national parks but especially if you wish to take good wildlife photos, it is the logical choice.

Small camps in the conservancies offer a more authentic and immersive experience and they also offer significantly better value for the wildlife enthusiast if you consider the cost per hour of game drive or even the cost per big cat seen.

Going back to our trip in the morning, after seeing the lioness and her two cubs, we continued on our way out of the conservancy for some work we had at the nearest town. This took us almost the entire day and it was evening by the time we returned to our camp. There was a large herd of elephants browsing calmly as they fed, just metres from our camp.

They soon moved away a bit and the entire herd started pulling down an acacia tree to feed on it.

African elephants in Kenya have not been subjected to the same loss of habitat as their cousins in India and so fortunately are almost never aggressive. We are therefore happy to see them close to us.  Elephants often approach our camp but never walk in, preferring instead to stay away from human habitation. We entered our camp at the end of a long day, just as the sun was setting and from our tents saw the elephants silhouetted against the sunset. 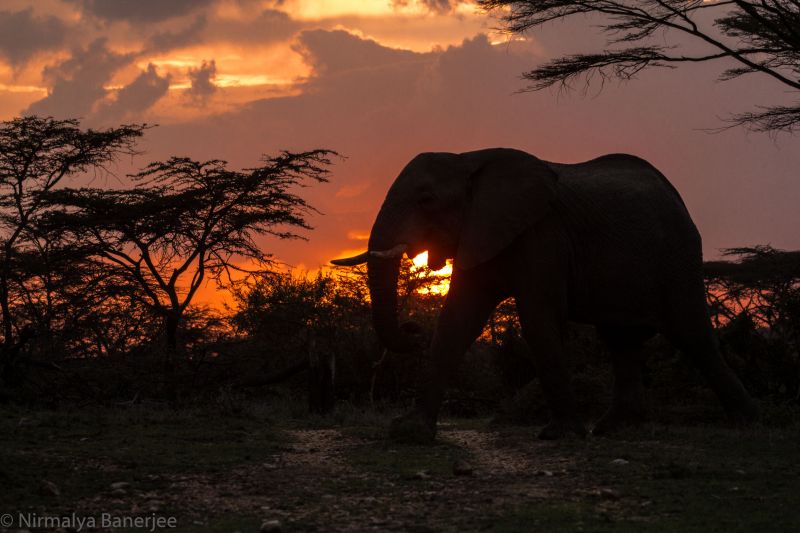 Formerly a corporate honcho, wildlife enthusiast Nirmalya Banerjee and his wife Jui set up the Porini Cheetah Camp in a private conservancy in Masai Mara in June, 2017. This is the first Indian-hosted camp in the Mara.

A home away from home