I would like to make a children’s film in future: Manu Antony

DECCAN CHRONICLE. | PRIYA SREEKUMAR
Published Aug 20, 2016, 12:25 am IST
Updated Aug 20, 2016, 7:31 am IST
Editor turned shortfilmmaker Manu Antony talks about his directorial venture Vicky, which has a dog in the lead and his future projects

When editor Manu Antony decided to make a short film on the subject of freedom, he did not go the conventional way; instead, he explored the theme through the eyes of a dog. Titled as Vicky, the short film became a rage on the social media aided by a comment of actor Jayasurya on his Facebook page. Jayasurya was so impressed with the making of the film that he jokingly cautioned his colleague Prithviraj not to search for Manu’s number since he would be Manu’s hero when Manu intended to make a feature film.

A look at the short film that was incidentally released on August 15 is proof of Manu’s talent as a director, editor and script writer. He has been working as a spot editor for Pretham and has also worked with Aashiq Abu. He continues to work with editor V. Saajan. Thiruvananthapuram-based Manu is elated by the response his debut film has garnered with many celebrities applauding his efforts. He says, “I wanted to look at the theme of freedom through an animal and we decided to do it with a dog. Since I am working in the film industry, it was easy for me to assemble my technical crew who are all my friends from the industry.”

Then began the hardest part — the search for the hero; a dog that suited the title character and could act too. It was a tall order and had the team searching far and wide till they reached Kalady, where they found a likely candidate.  “The dog’s name is Rex and he belongs to Dr. Sunil. One look at him and I knew he was Vicky! After a month of training by dog trainer Pranav Prabhakaran, Rex performed outstandingly.” 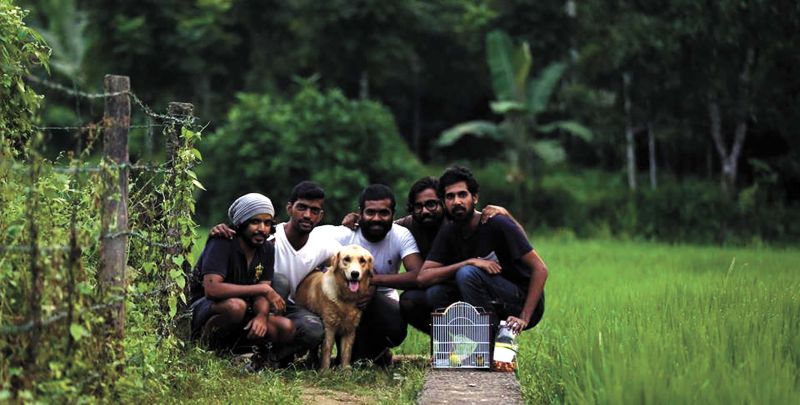 Manu with his crew

The near human emotions that Rex has imparted have become a talking point.  Manu jokes that his limits of patience were sorely tested in the 10 days of the shoot. He quips, “I could not scold him, nor would he obey my commands every time. I could shoot only in the early mornings or evenings because he would get tired soon. He was a bit wary of us when the shoot started but soon gelled well with all of us.”

The 10-minute film travels through the actions of Vicky who revels in his unshackled freedom. Soon his master brings home a pair of parrots in a cage. Vicky falls into a ditch and gets rescued after a long interval. He understands the importance of freedom and frees the parrots. The editing and making of the film are superlative. Manu mentions, “Editing is what I know and I plan to make a full-length children's film in future.”