In an adrenaline-pumping, machismo-dripping action movie, a childish character sounds like a misfit. But when a grumpy-faced Govind walks into the scene hesitantly, pushed by his nagging mother, the audience instantly takes a liking for him. That he could evoke laughter in his introduction scene in Kalki makes Dheeraj Denny proud. Govind, the wannabe scientist who is forced to choose a cop’s career, for Dheeraj, is a life-defining role. “That too, with Tovi,” he exclaims.

Tovi, his cousin, for the rest of the world, is Tovino Thomas, the young super star.
Acting with someone he grew up with is a humongous, exciting moment, but what Dheeraj hadn’t expected was that before camera, Tovino would be a different person. “There is this scene where I had to explain to him the background of the antagonists. I had to speak as Tovi just listened. But when I started speaking, I could see that he was fiercely staring into my eyes in a way he hadn’t looked at me before. I stammered and forgot my lines,” he laughs, recalling that he had to take a break for some time to calm down. 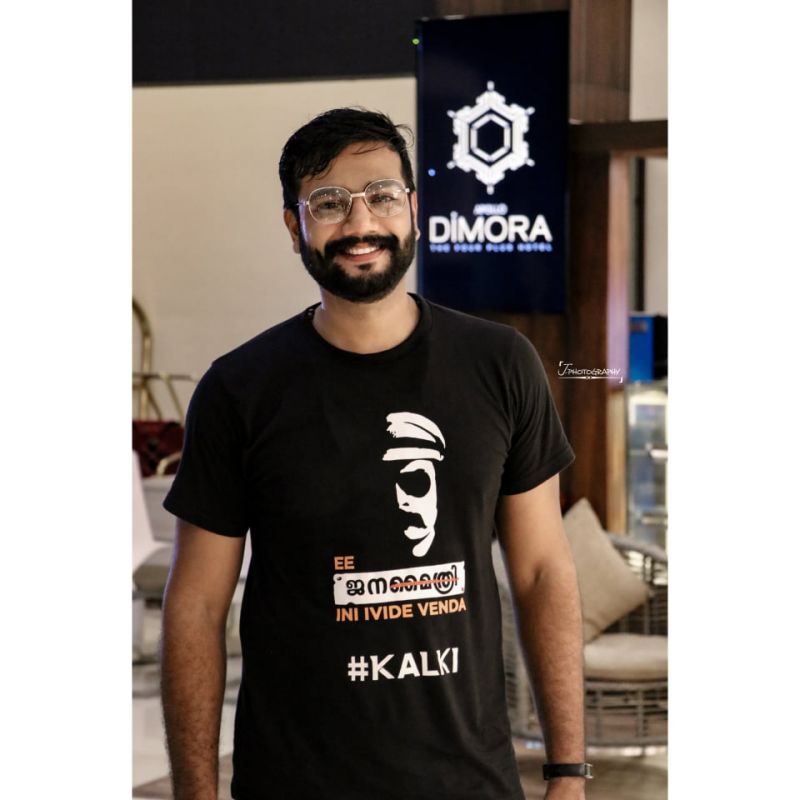 Kalki, though many believe, is not Dheeraj’s debut movie. His first was Y, in which he played a metro-based techie, after which he was seen as a politician in Himalayathile Kashmalan, both low-budget films starring newbies. His third, incidentally, has become his first big break. Flashing his dimples, the charming Dheeraj easily carried on his shoulders a naïve character, of a policeman who invents stuff and makes blunders, resulting in mishaps. Those who have watched the Praveen Prabharam directorial would remember the hilarious gas cylinder scene – that was his first tryst with Govind. Dheeraj says, “During the audition, I was asked to enact the scene and when I did, they all laughed and told me I could bring out the cuteness and hilarity the scene demanded. And then, I was briefed about Govind, the youngest among the five civil police officers. Each cop had distinct traits and mine was the one that stood out among them."

When he was told that it was KPAC Lalitha who would act as Govind’s mother, Dheeraj was excited, “That was the happiest day in my life! To act alongside a genius talent pool like her was surreal for me. In one scene, I could even shake a leg with her. You can see that I am laughing throughout. I was taken by surprise by her energy.”

Dheeraj worked on the sheepish grin of Govind, whose body language, he says, is inspired from Bill Gates. “I watched his interviews, observed his drooped shoulders and gestures, gave it a twist and developed a style of my own. When I presented this to scriptwriter Suvin (K.Varkey), he added his suggestions. Thus Govind came to my life,” says the Aluva-based actor, who goes on and on about his encouraging Kalki family.

In debutant Sarath’s Karnan, Napoleon, Bhagat Singh, too, Dheeraj would don the khakhi. “It’s an independent movie. The first half is humour-packed and the second, an investigative thriller,” he says. Also up for release is Edakkad Battalion, where he’d act alongside Tovino once again – this time, as the antagonist, a drug peddler. With myriad characters coming his way, Kalki marks the start of a new phase in Dheeraj’s life. “I hope so,” he winds up.