The art of framing it right: Swaroop Philip

DECCAN CHRONICLE. | DEEPTHI SREENIVASAN
Published Sep 5, 2016, 12:14 am IST
Updated Sep 5, 2016, 7:13 am IST
Swaroop Philip is surprised at the resposnse to music video Sirikkadhey for which he has cranked the camera

When cinematographer Swaroop Philip was instructed by  director Prabhu Radhakrishnan  that each frame should look like a painting, he hardly expected the end result to become a talk of the town from the day it was released on Youtube. Swaroop   cracked the camera for the promo music video Sirikkadhey for the upcoming movie tamil movie Remo. The dream like music video is a hit online.

Swaroop is being lauded for his work in the video which stars composer Anirudh along with  singers Arjun Kanungo & Srinidhi Venkatesh and actors Sivakarthikeyan and Keerthi Suresh. Speaking about how he got the work Swaroop says “ It was quite accidental. I was sitting in a studio for the colour correction of one of my ad work, the director of the music video Prabhu Radhakrishnan walked in for his work. He happened to see my ad and then enquired about it. And finally the editor of 'Sirikkadhey' who is a mutual friend of ours lead him to me. 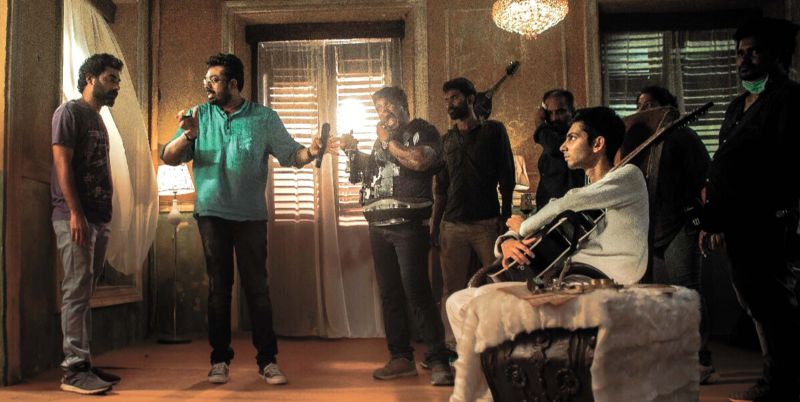 During the shooting of ‘Sirikkadhey’

This incident happened a year ago.” Speaking about his style of work Swaroop says “ Being a cinematographer, the role is to approach each project depending on its subject. I love making documentaries, but that pattern is different when compared to a movie or a music video. A music should be crisp. It should be visually appealing, given the short duration it has. For this video the director,editor and myself had sat down for a ten of pre-planning.

We spent time on focusing on the colors and properties that this video would require. It is the pre-planning that has given us this end result.”When asked about his entry into the film industry he says “ My father was a photographer, an actor and also used to draw. As a child i was exposed to studio, camera and dark room. Before i completed degree I joined cinematographer Sajan Kalathil and did some ad works with him.” Swaroop had joined hands with actor Salim Kumar for his documentary Pokkali, Took up the role of a DOP for the malayalam movie You Too Brutus  He has His latest work is for the upcoming movie ‘ Thrissivaperoor Kliptham’    ‘Sirikkadhey’ will also get its english version released today