Siddharth expressed his disgust on the picture on Twitter.

Mumbai: Tamil actor Siddharth is not only a very talented artist but he is also truly a great human being. Be it providing a helping hand or standing up for what’s right, Siddharth has never shied away to follow his heart.

On various occasions, Siddharth has voiced his opinions and showed support for women’s rights and equality. This time around, Siddharth yet again took a stand and slammed Ranveer Singh’s recently released advertisement for a clothing brand.

In the poster, we see Ranveer carrying a woman on his shoulder with caption “Don’t hold back, take your work home.” The two are dressed in formal clothes.

Siddharth expressed his disgust on the advertisement by sharing the billboard’s image on Twitter. “A new low for women's rights in the workplace in India. What were they thinking? #Fail,” he wrote. 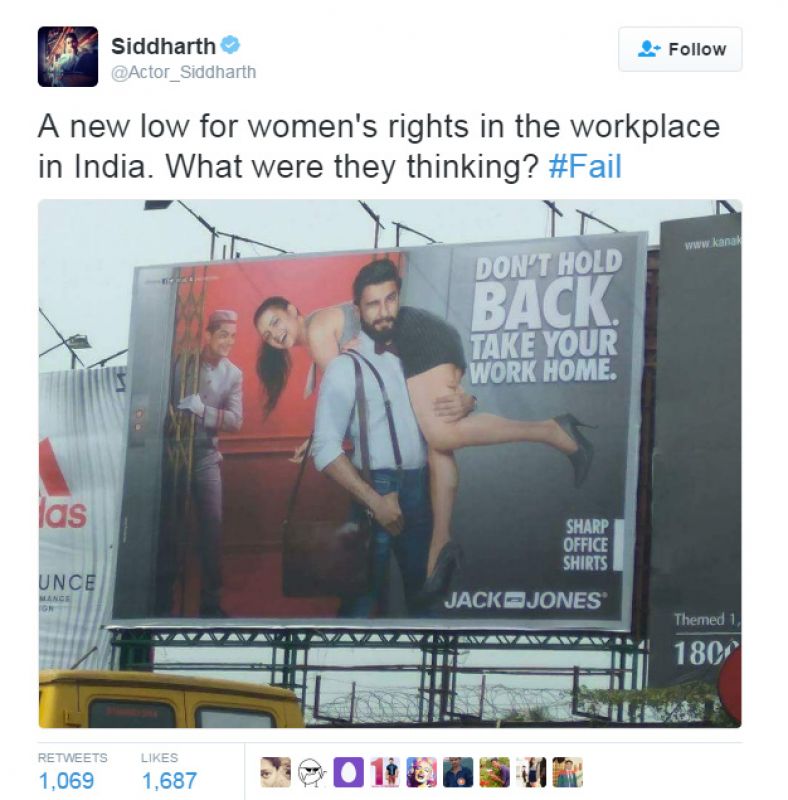 In the past, Siddharth grabbed everyone’s attention when he stood against glorification of stalking women in films.

“We've been selling a terrible dream in our films for long. That any man can get the woman he wants just by wanting her enough. Must change," he had said.

“When a woman stalks a man in our films she's a vamp. When a man does it he is a hero. It's a complicated discussion. But it needs to be had,” he concluded.

Now coming back to Ranveer’s campaign, we can’t avoid the fact that the image does send out a wrong message. However, Ranveer hasn’t yet responded to Siddharth.