By this tweet, he meant to warn the Bollywood filmmakers that it would be tough to reach to the level of Baahubali 2.

New Delhi: Rishi Kapoor, known for his outspoken nature, has again made to the news as he takes a dig at Bollywood for not making movies like 'Baahubali'.

The 64-year-old actor took to Twitter to express his happiness about the movie touching the benchmark of Rs. 1000 crore.

He wrote, "Seeing Bahubali 2 now. Interval. Chat later about the film. I want to know where has this film been shot? I want a 2 BHK there! Any agent?"

The actor further tweeted, "BAHU"t"BALI"yaan chadengi filmon ki to match this film's triumph and business. An Indian Celebration. Glad am part of this business of films." 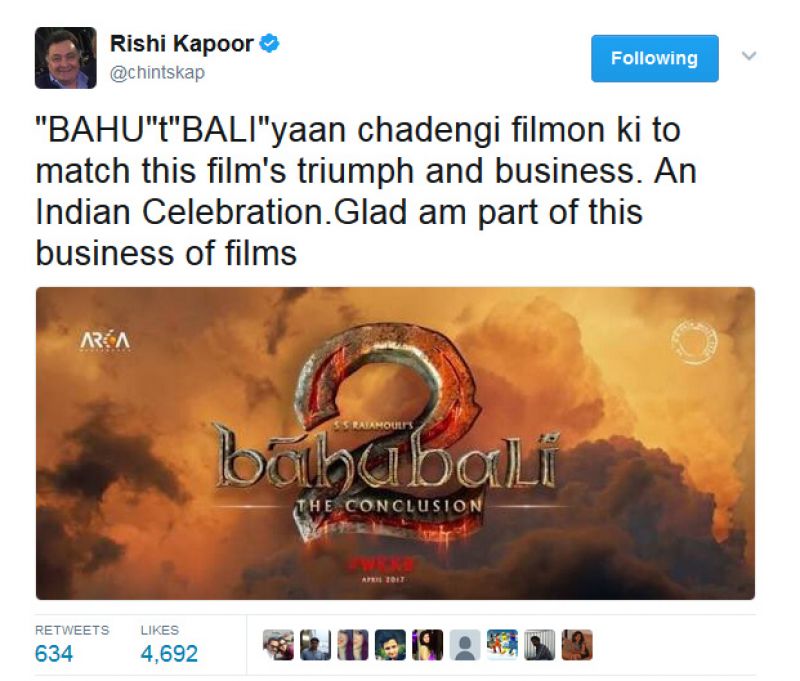 By this tweet, he meant to warn the Bollywood filmmakers that it would be tough to reach to the level of Baahubali 2.

Earlier, filmmaker Kunal Kohli also made fun of all B-town stars who promote their movies on various shows.

The director tweeted, "So the stars of #Bahubali2 didn't go on reality & comedy shows & make an ass of themselves doing silly things & answering silly q&a's."

On a related note, SS Rajamouli's directorial ' Baahubali 2: The Conclusion' continues to take the world by storm as the movie became the first Indian flick to cross the magical figure of Rs. 1000 crore at the global Box Office.

■Tamannaah Bhatia miffed with Rajamouli for chopping her scenes from Baahubali 2?
■It’s a bird, it’s a plane, it’s Baahubali!
■Truly overwhelmed: Prabhas thanks fans, Rajamouli as Baahubali 2 earns Rs 1000 crore
■Don't want to make a film as grand as Baahubali: A. R. Rahman