The market leaders-- Hero MotoCorp, Honda 2 Wheelers and Yamaha -- achieved new sales milestones by registering highest ever sales in the month of September

The month of September turned out to be in favour of the Indian two-wheeler market. The market leaders-- Hero MotoCorp, Honda 2 Wheelers and Yamaha -- achieved new sales milestones by registering highest ever sales in the month of September. Also, the competition between Hero and Honda to gain market leadership is getting fiercer. While Hero still enjoys the top position, Honda's sales have also been increasing exponentially towards the leading scores. Apart from these two, other two-wheeler manufacturers are also achieving new sales records, which is further going to be bolstered during the festive season. Let's have a look at the Indian two-wheeler market statistics for major manufacturers during September 2016. 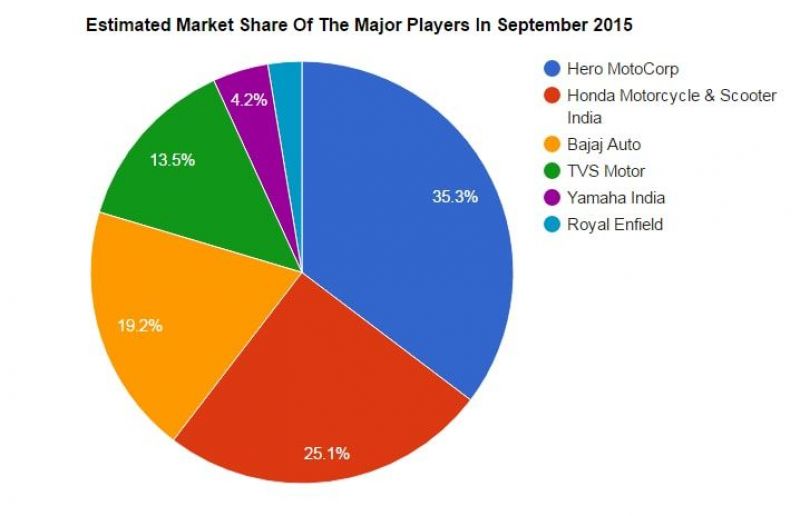 Hero MotoCorp (HMCI): Enjoying the market leader's position for years now and the world’s largest two-wheeler manufacturer, Hero MotoCorp  clocked its highest-ever sales in a month by selling 6,74,961 two-wheelers in September 2016. The company registered a growth of 11 per cent over the corresponding month last year when the company had sold 6,06,744 units.

Honda Motorcycle & Scooter India (HMSI): HMSI also broke all its previous sales records at the onset of the festive season. Along with all-time high export figures, domestic sales crossed the 5 lakh mark for the first time. The company's total sales grew 32 per cent to 5,69,011 units in September 2016, compared to 4,30,724 units in September 2015.

Bajaj Auto Ltd (BAL): Where most of the two-wheeler manufacturers registered a huge growth in the Indian market, Bajaj remains almost static with 1 percent growth. The overall motorcycle sales of the company stood at 3,31,976 units in September 2016, which is almost similar to the sales of 3,30,228 units over the same period last year. This is due to its fall in the export market by 29 per cent, while the domestic market saw a growth of 23 per cent.

Royal Enfield (RE): Royal Enfield continues with a strong sales performance, posting a combined domestic wholesale and exports figure of 57,842 motorcycles in September 2016. The company recorded a growth of 30 per cent over the same period last year when RE recorded sales of 44,491 units.

Farm loans to get 1.5 per cent interest relief