Guatemala City: In Guatemala, it is common sight, to spot girls as young as ten, holding babies close to their bosom, or playing with other little children. And while one might think they are siblings, chances are that the girl is the mother of the children.

Guatemala has one of the world's highest teen pregnancy rates, according to data available, more than 5,100 girls under 14 had babies in 2014. However, in 2012, there were only 2,000 recorded cases of girls younger then the age of 14 giving birth to babies.

The alarming rise of teenage pregnancies in the country is not the shocking aspect, what is even more disturbing is the fact that in 90% percent of the cases, the father of the child is a relative. It gets worse, in 30% of the cases the pregnancy is result of the girl being raped by her own father. 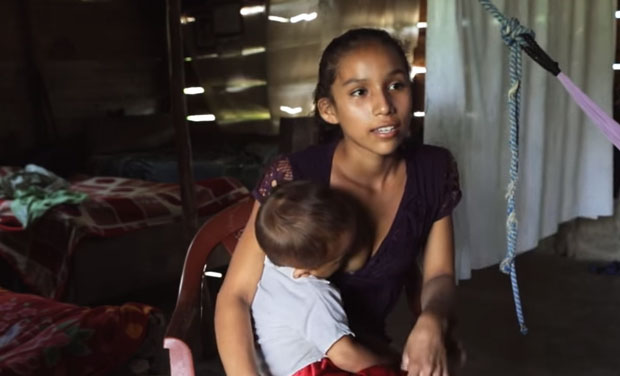 A teenage mother with her child (Photo: YouTube screenshot)

Most of these girls are too young to understand what is happening to them, they become mothers as soon as they hit puberty. In some cases, girls are sold or traded by their mothers in return for money or goods.

According to a report in MailOnline, only one in ten women who are raped will ever see their perpetrator convicted. The head of Guatemala's Sexual and Reproductive Health Observatory (OSAR) says that the problem lies in the fact that the men in the country feel like their daughter is their ‘property and possession’.

'We've heard fathers say 'She's my daughter and my property so I will do what I want with her', revealed Montenegro.

'Guatemala has a culture, highly tolerant to sexual violence against girls and women, which normalizes – and even justifies in several cases – this type of violence’ said Carolina Escobar, the director of La Alianza Guatemala, to the Tico Times.

Rape was rampantly used as a weapon by the army during the Guatemala civil war. Grandmothers, mothers, children, no one was spared. It is estimated that 100,000 women were brutally raped every year during the time of war. Even CIA-backed right wing generals used it as a weapon.

Soon laws were introduced to curb rape in the country, but only a handful of men have been convicted for the heinous crime.

Ever Given starts to move in Suez Canal: maritime traffic tracking sites