Prime Minister Narendra Modi touted the power of social media and his own goals for developing India's tech economy on Sunday, speaking to a global audience from a "town hall" meeting at the headquarters of the world's largest social network.

Modi also vowed to improve education for girls and "bring more women into decision-making" in his country, while responding to a handful of questions during a carefully orchestrated session led by Facebook CEO Mark Zuckerberg. In image, Modi speaks

Ahimsa is the greatest Dharma, Modi wrote on the Facebook's Real Wall at its headquarters here when he visited for a town hall question and answer session.

Modi received a warm welcome from about 1,200 people at the morning session, which was also streamed live on Facebook.

Sunday's hour-long session came during a whirlwind tour of Silicon Valley that included two days of meetings with the CEOs of Apple, Google and other leading tech companies, along with local political leaders and an estimated 18,000 people who were

After meeting with Modi on Sunday, Google's Pichai announced his company would provide Wi-Fi service to 400 train stations across India, which he said would serve 10 million rail passengers daily.

Modi in fact struck several notes that many tech entrepreneurs would applaud. He said he's working to reduce government regulation of business and crisscross the country with fiber optic networks.

Modi's visit to California is the first by an Indian head of state since Indira Gandhi came to Los Angeles in 1982, and it's been a rallying event for many of the tens of thousands of Indian immigrants who work in Silicon Valley.

But he has critics: Some activists organized protests on Sunday to press the prime minister over creation of a Sikh homeland, along with alleged mistreatment of Muslims and Christians by groups linked to his Hindu nationalist Bharatiya Janata Party.

Silicon Valley firms are eager to do more business in both countries, although China's government has thrown up more barriers to U.S. firms. Modi is scheduled to fly east Monday to meet with President Obama before returning home to India. People

Modi is scheduled to fly east Monday to meet with President Obama before returning home to India. In pic, Prime Minister Narendra Modi on screens in SAP center in San Jose.

The Prime Minister also won over the Silicon Valley with his quotable one-liners on the digital revolution - originating from this part of the world - that is changing everyone's life-style globally. He also promised to make governance more

Chairing a G4 meeting, Narendra Modi pressed for UNSC reform within a "fixed timeframe" in the current session of the UNGA, saying the world body reflects the mindset of a century "we left behind" and is not in tune with new concerns like terrorism

Modi said the UNSC "must include the world's largest democracies, major locomotives of the global economy, and voices from all the major continents" to carry "greater credibility and legitimacy".

Prime Minister Narendra Modi during a visit of TESLA motors facility in San Jose. Modi, who is scheduled to meet President Barack Obama tomorrow in New York, said the dynamic Asia Pacific Region will shape the course of this century.

Observing that India and the US are located at the two ends of the Asia Pacific region, the Prime Minister said, "We have the responsibility to shape a future of peace, stability and prosperity in this region."

Addressing the UN General Assembly soon after it adopted the Sustainable Development Goals for 2030, he also underlined the need for ensuring "climate justice" while pursuing these targets so as to ensure protection to the poor.

Modi talked about the need for eradicating poverty and ensuring development as he highlighted that 1.3 billion people around the world are forced to live in poverty. In image, Modi with World Bank President Jim Yong Kim.

His pitch for making the UNSC broad-based comes amidst India's strong bid for a permanent seat in the expanded five-member world body. Modi asserted that the global challenges like climate change and sustainable development are the collective

On the issue of climate change, he maintained that common but differentiated responsibility is the basis for dealing with this challenge. In this context, he asked the developed nations to fulfil their responsibility of sharing technology,

He underlined that achieving the goals of sustainable development is the collective responsibility of the world and the bedrock for dealing with climate change is "common but differentiated responsibility". In pic, Modi with UN Secretary General Ban

In pic, Autograph of Prime Minister Narendra Modi on a cloth painting done by a differently-abled girl, which was presented to celebrity chef Vikas Khanna. Khanna, will present the flag with gift along with other things.

The $ 4.5 trillion club: PM Narendra Modi with leading Fortune 500 CEOs at a special event in New York. Prime Minister Narendra Modi dined with over 50 CEOs from Fortune 500 companies while continuing his pitch that India is open for business. The

Modi arrived in New York on Wednesday night on a six-day official visit during which he would travel to Silicon Valley tomorrow to meet the top IT CEOs of the region and address a meeting of some 18,000 Indian Americans on September 27. In picture,

Prime Minister said during the meeting with the top CEOs that while the foreign direct investment (FDI) all over the world fell, it increased by 40 per cent in India and that reflected "the confidence in the Indian economy."

PM meeting with Ajay Banga, CEO of MasterCard and Head of USIBC. " Reform in governance is my No 1 priority. We are for simplified procedures, speedy decision making, transparency and accountability" Modi said during a meeting with top CEOs of

Prime Minister with the top executives of major media and communication companies and promised the protection to Intellectual Property Rights (IPR). "Great hour with Indian PM Modi. Best leader with best policies since independence, but massive

Modi with his Bangladeshi counterpart Sheikh Hasina Wazed during a meeting.

Modi gives blessing to a member of Gujarati community.

Prime Minister Narendra Modi being greeted by the people on his arrival outside Waldorf Astoria in New York.

Prime Minister Narendra Modi being greeted by the people on his arrival outside Waldorf Astoria in New York . 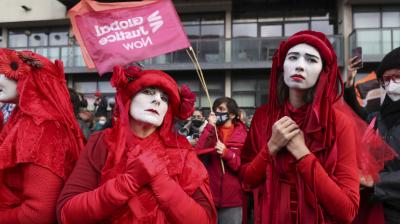