3 dengue deaths in Telangana, officials claim only one

Representational image
Hyderabad: In spite of three dengue deaths — all children —recorded in Telangana on Monday, district medical and health officials claim that only one death has been notified.
Among the dead was a 14-year-old Class IX student, whose mother is a staff nurse at ESI Hospital.
Dr S. Harsha of the epidemiology wing said, “Health workers contacted the family but they have gone to Vijayawada for the last rites. This is the only case notified by the hospital. The details of the other two deaths have not been sent by the hospital to the health department.”
The two cases are of a four-year-old girl from Chatrinaka police limits and an eight-year-old girl from Begumpet. The parents of four-year-old J. Akhaya protested at Chatrinaka police limits and alleged that their daughter did not receive proper treatment. 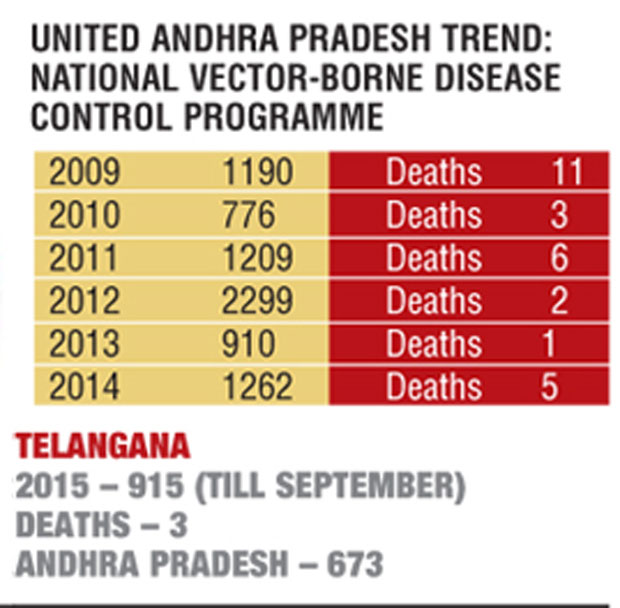 The government health officers, however, claimed total ignorance of these two cases. A senior health officer said, “All private hospitals are asked to notify the cases. There are two samples that they have to submit. One sample is tested in a private laboratory and another is tested at IPM. Though the IPM test takes time and the confirmation comes late, the treatment is not affected.”
The state government takes into account the positive results of IPM. This year, the total number of cases till September 14 has been recorded at 935 while last year till December, it was 438 cases.
Two more swine flu deaths recorded in Telangana:
Two more deaths due to swine flu were recorded on Monday, taking the total such deaths to four in September in the Telangana state. A 55-year-old woman from Mahabubnagar died in Gandhi Hospital and a 60-year-old woman from the city breathed her last in a private hospital in the city.
As many as 158 samples were sent to the Institute of Preventive Medicine from September 1 to 12, of which 25 were positive. The government has issued a statement, categorically stating that IPM is providing free testing services to all in-patients in private hospitals. At the same time, the government has also advised that people take homeopathy medicines as a preventive measure under guidance of a homeopathy doctor.
...
Tags: telangana, current affairs
Location: Telangana