"Cheteshwar Pujara has broken into the top 20 of the ICC Player Rankings for Test Batsmen for the first time in his career following the conclusion of the Colombo Test, which India won by 117 runs to clinch the series 2-1," the ICC said in a statement.

The 27-year-old batsman carried his bat in the first innings and returned unbeaten on 145 not out, his seventh career century, which was the cornerstone of India's first innings score of 312. For this performance, Pujara has been rewarded with a jump of four places, which puts him in 20th position. 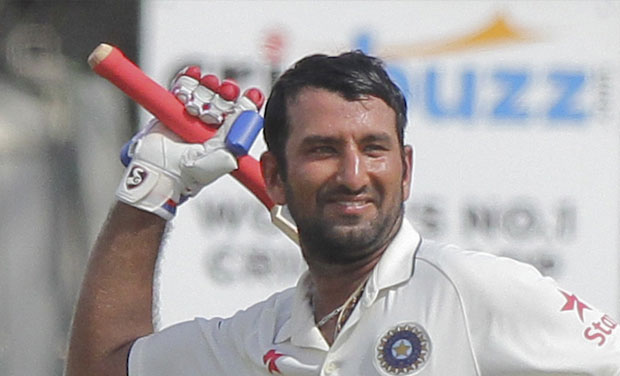 Pujara is now the second India batsman to feature in the top 20, but following Virat Kohli's drop to 11th (down by one place), the fifth-ranked side has no batsman inside the top 10.

Apart from Pujara, there were few other middle-order batsmen who made significant contributions to India's cause at the Singhalese Sports Club, which, in turn, have helped them to head in the right direction.

Rohit Sharma has moved up two places to 48th, Ravichandran Ashwin has gained five places and is now in 50th spot, while Amit Mishra, who scored 59 in the first innings and featured in a 104 runs eighth wicket partnership with Pujara, has vaulted 56 places to 91st.

It was a disappointing Test for Sri Lanka batsmen. However, Angelo Mathews has retained his fifth ranking following his seventh career century (110 in the second innings). He is now 11 points adrift of fourth-ranked South Africa captain Hashim Amla.

It's a magnificent milestone for a young team, we have created a bit of history: Virat Kohli

Meanwhile, there were no changes to the top 10 of the ICC Player Rankings for Test Bowlers. However, there were improvements for Ishant, who reached the 200-wicket mark after claiming match figures of eight for 86. As a result, the fast bowler has moved up three places to 18th.

Amit Mishra's three for 72 in the match has elevated him two places to a career-high 37th, while Umesh Yadav has also improved his ranking by two places to 42nd. Sri Lanka trio of Dhammika Prasad (up three places to 22nd), Nuwan Pradeep (up 12 to 57th) and Mathews (up two to 71st) have also all made career-high gains.