Drone age: Bengaluru duo off to a flying start

Bengaluru: Did you know that it was two young graduates from R.V. College of Engineering who helped Bengaluru police keep a watch, from high on above, and helped ensure the safety of New Year revelers on M.G. Road on December 31, 2014, just two days after the Church Street bomb blast on December 29?

Yes, it was a drone fitted with cameras, made by Mrinal Pai and T. R. Mughilan, that did the job. Pai and Mughilan now run a start-up called Skylark Drones, and have even made a sale to the Indian Army’s Assam Rifles regiment.

“We live-streamed the video we captured to a ground station, which was monitored by a police personnel. It helped them monitor the crowd in an effective way. They asked us to do the same for Id-Milad procession, after our work on the New Year’s eve,” Pai said.

Drones, or unmanned aerial vehicles, have for long been used by the world’s military forces for surveillance and reconnaissance. Increasingly, they are being used for civilian purposes. If retail giants such as Amazon are testing using drones to deliver packages to customers, real estate companies and municipalities are using them to conduct land surveys, and police forces are deploying them to monitor crowds.

Pai and Mughilan’s journey towards Skylark Drones began in 2008, when they started collaborating on the technology even as students. Their big breakthrough came when they won the SAE aero design competition, organised by the American space agency NASA (National Aeronautics and Space Administration) in 2013. The next year, they founded Skylark, which now has five full-time staff and eight interns.

Pai graduated from R V College of Engineering (RVCE) in 2014 while Mughilan finished his Masters in Aerospace Systems from Purdue University in 2014 after graduating in Mechanical Engineering from RVCE.

There is a growing market for aerial data, potentially worth hundreds of millions, and 22 year old Pai and 24 year old Mughilan know this. "We started out as a drone manufacturing company," said Mrinal Pai. "However, with the wide range of activities for which the drones can be leveraged, we are now looking at ourselves as an aerial data company." 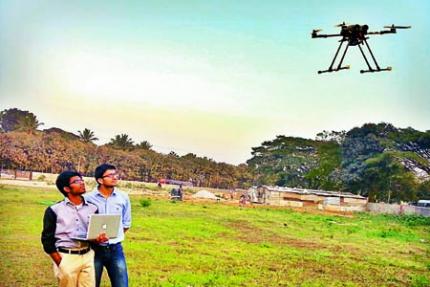 Talking about the company’s first sale, Pai said that Assam regiment of the Indian Army contacted the company with the requirement for a night vision, silent drone. “We built the drone ground up within 10 days and dispatched. They were really happy,” Pai adds. Real estate companies, for instance, are actively looking at using drones for land assessment. Drone images are typically not only more accurate than satellite imagery but drones can also map large tracts of land in a short time. Insurance companies, too, have begun to use drone data. Skylark provides aerial photographs of accident sites to help expedite insurance claims processing at a leading insurance company, Pai and Mughilan said. The start-up’s journey, however, has been far from smooth, not least because regulatory hurdles continue to be the biggest roadblock for the growth of companies such as Skylark. With no clear guidelines or regulations in place, the rules that govern drones and, in effect, these companies, are ambiguous.

The US Federal Aviation Administration (FAA) has recently issued regulations and guidelines for the use of drones in civilian airspace in America that could serve as a guide to catalyse other countries to come up with their own drone policies. The Directorate General of Civil Aviation (DGCA) in India is expected to put in place a framework for the use and application of drones in the country in a few months.

Funding the venture is another problem, but the duo are hopeful they will overcome it.