Movie review 'The Avengers: Age of Ultron': Isn’t a superhero classic, but is Marvel-lous enough

In Sean Lowe’s 2012 bestselling Marvel Comics: The Untold Story, he describes one of the many things that set Marvel apart from its rival DC: The “Marvel universe” — which eschewed the fictional cities like Gotham and Metropolis that DC superheroes inhabited — was set instead, in real life locations. It was also interconnected: All the superheroes inhabited the same “universe” — so things that had happened in a story featuring one superhero for instance would have a bearing on other stories, other characters, accounting for phenomena like space and time. There was a continuity to their stories and a cause and effect, that fans could keep track of.

This week’s new release — Avengers: Age of Ultron — is a fine example of this feature of the Marvel-verse, picking up not just where the previous Avengers film left off, but also from the various happenings in the individual film/TV franchises of its superheroes, including Captain America, Thor, Iron Man, The Incredible Hulk, Agents of S.H.I.E.L.D, and even bits from Guardians of the Galaxy. (To get fully up to date on the back-story to the new Avengers film in just seven minutes, you might want to watch this video via Vulture, which helpfully explains it all).

We start off with the Avengers — Hulk, Black Widow, Hawkeye, Captain America, Thor and Iron Man — fighting in an East European region of Sovakia, trying to take down a Hydra project led by Baron Strucker. Things are going swimmingly well for the team, until they encounter the Maximoff twins — Pietro whose powers include superhuman speeds and Wanda, who can control/manipulate minds and also create energy blasts —human experiments of Baron Strucker’s. Despite being thrown off their game a bit, the Avengers manage to retrieve Loki’s lost sceptre and get back to their HQ. 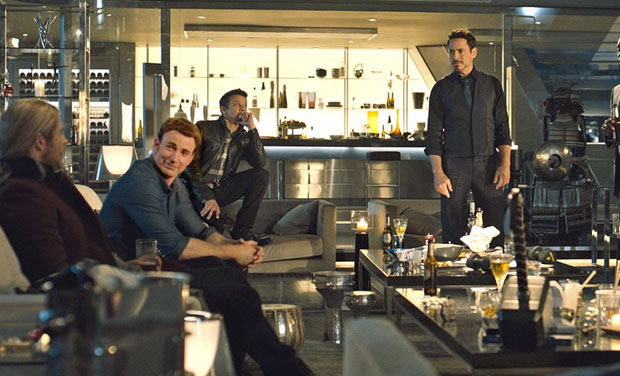 Even as the rest of the Avengers are busy recouping/congratulating themselves on a job well done, Tony Stark and Bruce Banner, now in their off-duty personas, find that the gem in Loki’s scepter is actually a form of artificial intelligence, and that it can be used to complete Stark’s dream defence system for the earth — Ultron. Of course, things are rarely as easy, and Ultron ends up being a super-powerful robot with homicidal tendencies, who wants to destroy the Avengers and all of humanity, rather than protecting it. And so the stage is set for plenty of explosive showdowns, much damage to property and hapless civilians, and the chance for the Avengers to call for some friendly help from Nick Fury and their other pals from the Marvel-verse. It’s two hours and 22 minutes of pretty stunning, non-stop action.

Apart from the superheroes being superheroes (which makes for thrilling viewing), it’s when they’re showing off their non-superhero sides that Age of Ultron has some standout moments: the Avengers all joshing Thor when he says that only those who are “worthy” can lift his hammer, then trying in various ways to lift it themselves, only to fail; their good-natured ribbing of Captain America; the burgeoning chemistry between Black Widow/Natasha Romanoff and Bruce Banner/Hulk. And despite minor quibbles (the awful amount of time the good guys waste fighting each other; the Maximoff twins’ ludicrous accents), fans will lap up this latest product from the Marvel stable.

Age of Ultron may not go down as a superhero classic, but it delivers what it’s meant to. And of course, it sets the scene for the Marvel instalments still to come. Mission accomplished.