A religious conversion that happened earlier in Agra. (Photo: PTI/File)

New Delhi: The Union law ministry has shot down the move for an anti-conversion law, rejecting the clarion call by the RSS and backed by some BJP ministers at the Centre.

It said the Centre has no jurisdiction over the subject and thus no national anti-conversion law can be enacted.

This was conveyed last week to the Union home ministry, which sought legal opinion after senior Cabinet ministers like M. Venkaiah Naidu had raised the matter in Parliament.

The law ministry’s opinion is at variance with the views of some ministers in the NDA government as well as top BJP leaders like party chief Amit Shah, who had thrown their weight behind such a move.

After a controversy raged over forced religious conversions by some Sangh Parivar outfits, the BJP leaders and some ministers had said they were ready to bring an anti-conversion law, and put the onus on the Opposition parties to support such a move.

The law ministry said it was purely a “state subject” and the Centre has no jurisdiction.

“Such a move will not only be legally untenable, it will also go against the basic tenets of the Constitution,” a law ministry source said.

Armed with this opinion, the Centre can now put a lid on the controversy. 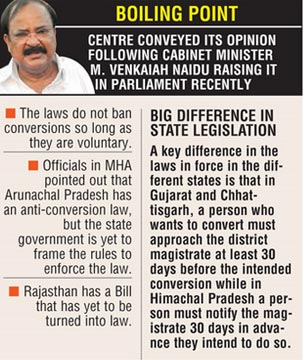