Chennai: His stressful life made director Chellapa experience a sudden heaviness in the chest one day. He almost found his world collapsing around him. He was advised to try “oxygen therapy” as this would help him overcome stress.

After a few sessions, he found he was feeling better and was able to return to his routine work. “That was five years ago. Today, I feel as healthy as anyone else,” he said, summing up his experience.

“The hundred per cent oxygen treatment is resorted to in the Navy, Air Force and the Army when personnel face problems due to tremendous pressure or high altitudes. But this is not much practiced in the private sector,” says Dr B. Ayaz Akbar, chairman and consultant preventive cardiologist, Oxymed hospitals. “The manipulation of temperature and oxygen relieves one from pain and this non-surgical intervention does not cause pain and brings down the hospitalisation costs too,” he explains. 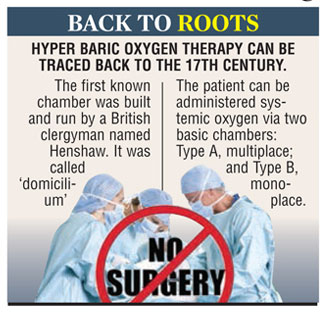 Hyper Baric Oxygen treatment (HBOT) is emerging as an alternate treatment option for traumatic brain injury, in crush injuries, to heal wounds in diabetics and handle severe infections, sudden deafness, stroke and even those with cardiac problems. This helps to repair the damaged tissues faster as it ensures more oxygenated blood supply. Breathing 100 per cent oxygen under pressure allows oxygen to dissolve into the blood plasma, resulting in increased amounts of oxygen delivery to the tissues. Hyper Baric Oxygen acts as an anti-viral and anti-bacterial.

This FDA approved treatment is widely practiced in USA and is emerging as an alternate treatment in India. Oxymed Hospital in Chennai joined the few hospitals across India that offer this non-invasive treatment facility.