Hyderabad: The AP government is writing letters to the Prime Minister’s Office, the Railway Ministry and the Railway Board urging them to include in the “priority category” projects connecting the capital city in the railway budget being presented on February 26.

Chief Minister N. Chandrababu Naidu wants the Guntur-Guntakal-Dharmavaram line connecting the AP capital on the Vijayawada-Guntur stretch and the Rayalaseema region to be put on the fast track. The doubling of this line will reduce travel time between the AP capital and Rayalaseema from nine hours to six hours. SCR has completed survey for this project. 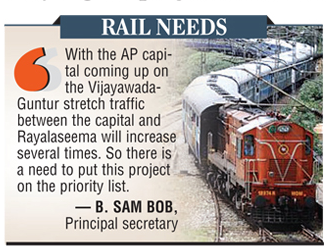 The Centre had already sanctioned the Guntur-Guntakal doubling project in undivided AP for taking up in the long run. But now the dynamics will change as the state has been bifurcated.

“It was to be taken up in a phased manner as the projected traffic was not much on the route when it was sanctioned. Now with the AP capital coming up on the Vijayawada-Guntur stretch traffic between the capital and Rayalaseema will increase several times. So there is a need to put this project on the priority list. We are requesting funds in the coming railway budget,” AP transport department principal secretary B. Sam Bob told this correspondent.

Chief secretary I.Y.R. Krishna Rao too has taken up with the Centre the speeding up of the execution of the Kakinada-Pithapuram railway line that will connect to the Howrah-Chennai mainline and the Nadikudi-Srikalah-asthi line. The AP government has agreed to bear 50 per cent of the cost of the two projects in addition to giving the required land for the latter project.

“The Kakinada-Pithap-uram line is a new line measuring 14 km to connect with the Howrah-Chennai line. The state has set the process in motion to develop industries, a new port and set up a SEZ in Kakinada. So rail connectivity is crucial,” said an official.

The Nadikudi-Srikala-hasthi line provides connectivity from the outskirts of Guntur to Prakasam, Nellore and Chittoor. “We are also seeking several other rail projects promised in the AP Reorganisation Act like the railway zone for Visakhapatnam.

The CM is using his good offices to ensure that AP gets a good number of projects in the railway budget,” the official said.