Mumbai: He is unusually calm, probably a mirror image of Team India captain Mahendra Singh Dhoni. No wonder both of them struck the right chord in 2011 when India lifted the World Cup. Gary Kirsten – the then coach – kept a low profile even after the triumph. He quietly packed his bags to spend time with family. On Sunday, he returned to the Maximum City to talk about his one-time batch. When the whole world is writing the Men in Blue off, the 47-year-old said: “India is one of the top four teams. Actually, the fact that they are not winning now is a good thing.”

Kirsten, who is now a mentor with the South African cricket team, said what matters is how the team fares in the knockout stages. “In my opinion, all top four teams have the chance of winning the trophy. It is still five weeks to go to reach that phase and India should be making it. They stand as good a chance like Australia, South Africa, New Zealand and even Sri Lanka, who, usually play well in World Cup,” said the World Cup-winning coach.

“Yes, they (India) may not be playing their best cricket at the moment. But it is good that they are not. It is too early for teams to be in a good form. On top of that, India have three players who know exactly how to play during such knockout stages – Dhoni, Virat Kohli and Suresh Raina. Hence, the team has good reference points,” he added.

The South African also rose to Dhoni’s defence when spoken about the flak he has been receiving from all quarters for the team’s poor show Down Under.

“He has been one of the most successful World Cup captains ever. Let us not forget the Dhoni factor. A lot of things have changed in his life but then, when the time comes, it is him who steps up,” said Kirsten, who was in charge of India from 2008-2011.

Such was Kirsten’s impact on the unit that players still remember him. So much so that Raina, in an interview, called him a father figure. His stint with the team along with the success, can be termed exceptional for the period when he took up the job – right after the Greg Chappell episode and India’s first round exit from World Cup in 2007.

However, Kirsten agreed that Ishant Sharma being injured isn’t an ideal situation but said: “In the modern world, injuries happen and other players come in. You never know, Mohit Sharma (Ishant’s replacement) might just end up having a good tournament.” 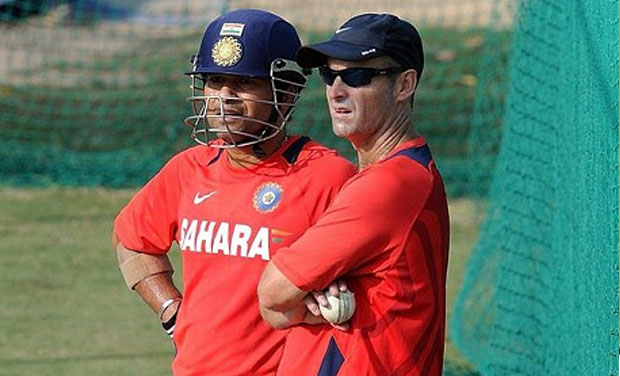 (Gary Kirsten with Sachin Tendulkar during his tenure with Team India, Photo: AFP)

Comparing the current team to that of 2011, he said that the present team’s batting line-up holds them apart. “I think it is a top class batting unit. It is important to go into the mega event with such a batting line up. India rely heavily on the spin department. If you remember in 2011, Yuvraj Singh was a huge factor with the ball. But Down Under, spinners will be not that effective. So, a good batting unit is needed. Under Dhoni and Duncan Fletcher, there is a young bunch with energy. They also won the Champions Trophy,” said Kirsten, who is still the highest run-scorer in World Cups till now (188 not out against UAE in 1996).

Among the current bunch, he believes Ravindra Jadeja is an important player and can be the key if he strikes form.

He refused to comment when asked about Dhoni underplaying Ravichandran Ashwin to test the other spinners. “I don’t have an answer to that. I am not close enough with the team now because I am working with South Africa. I don’t know their dynamics and strategies,” said Kirsten, who even made South Africa the top team during his tenure.

But the man from Cape Town never takes credit for his deed.

“I am no silver bullet. The coach is like a mechanic who looks into the bonnet in the engine to fine-tune. But if you do not have an engine, then it doesn’t help. India and South Africa are good engines and the coach’s role is to polish it,” said Kirsten.

Kirsten – the one-time opener for South Africa – was part of Hansie Cronje’s dream run in World Cup, 1999. The left-handed batsman believes AB de Villiers can complete the unfulfilled dream for the Proteas.

“Yes, we had the best chance in 1999 but now we have a stronger chance. We lost in the semifinal, under Hansie's leadership. Ended up with the same score against Australia and got blown away, quite a unique thing to happen,” he recalled.

Kirsten, before concluding, reiterated that India need to shed off the baggage of past tournaments and navigate the quicker bowlers well to click in the World Cup.

“They also have a good record of chasing. I am wondering whether they will opt to chase in the matches,” he said.

However, he dismissed that opponents will have an edge with no Sachin Tendulkar around. “This team has been together for a couple of years. They have some credibility. People will be wary of them. They cannot be taken for granted.

Talking about a comeback as India coach, Kirsten said: “You’ve got to ask my sons and daughters. They were not letting me come here for two days also.”