Hyderabad: The Indian Journalists Union (IJU) and dozens of readers reacted with horror to the pillaging of Deccan Chronicle’s classified ads by the Times of India. Right from Twitter to Facebook and in letters to the editor, readers vented their anger at The Times of India for plundering the classified ads.

The court has recognised this as a cognisable offence and has asked the cops to investigate the systemic theft of classifieds from the pages of Deccan Chronicle.

The Indian Journalists Union expressed its deep concern over the piracy of classified advertisements from a rival paper by The Times of India, which claims to be the world’s largest circulated English daily.

In a statement issued here on Friday, IJU president S.N. Sinha, secretary-general Devulapalli Amar and Press Council of India member K. Amarnath said, “It was not surprising that the newspaper management which started the concept of ‘paid news’ and ‘private treaties’ by unethically mortgaging the news columns to the publicists to garner money, stooped to a new low by lifting the classified advertisements from its rival Deccan Chronicle to dupe its readers to believe that it was the front runner in that segment.”

They lamented that one of the oldest newspapers in the country, The Times of India, which should have stood as a role model for the media industry to emulate, “has been setting bad examples for its peers.”

“The police should pursue cases filed against the newspaper for piracy of advertisements by the Deccan Chronicle vigorously and put a full stop to such bad and immoral practices in the industry,” the statement said.

They wanted working journalists and civil society activists to raise their voice against such practices, which would ultimately prove to be perilous to the democratic society of which the press is considered to be the fourth estate. They demanded that The Times of India desist from such practices.

Mr Anand Seth, who runs a Mumbai-based PR agency, messaged, “Wish you best of luck for this bold step.” “On seeing today’s front page, I’m concerned about your esteemed newspaper b’cos ToI can go to any extent.”

Dr Mohan Guruswamy, a policy analyst studying economic and security issues, wrote on his Facebook page:  “The Times of India is passing through some desperate times in Hyderabad. It has for long being trying to supplant the mulki newspaper The Deccan Chronicle as Hyderabad and Secunderabad’s preferred newspaper, but has fallen well short. We have all heard of or experienced plagiarising of bits of copy, news and sometimes of entire articles.”

Dr Guruswamy, who has held senior positions in government and industry, and specialises in the Chinese economy, continued: “Plagiarising is not just cheating. It’s theft. The Times of India has been caught en flagrante stealing classified ads from the Deccan Chronicle to pad up its acceptability. What’s on its list next to lift? Perhaps obituary ads?” 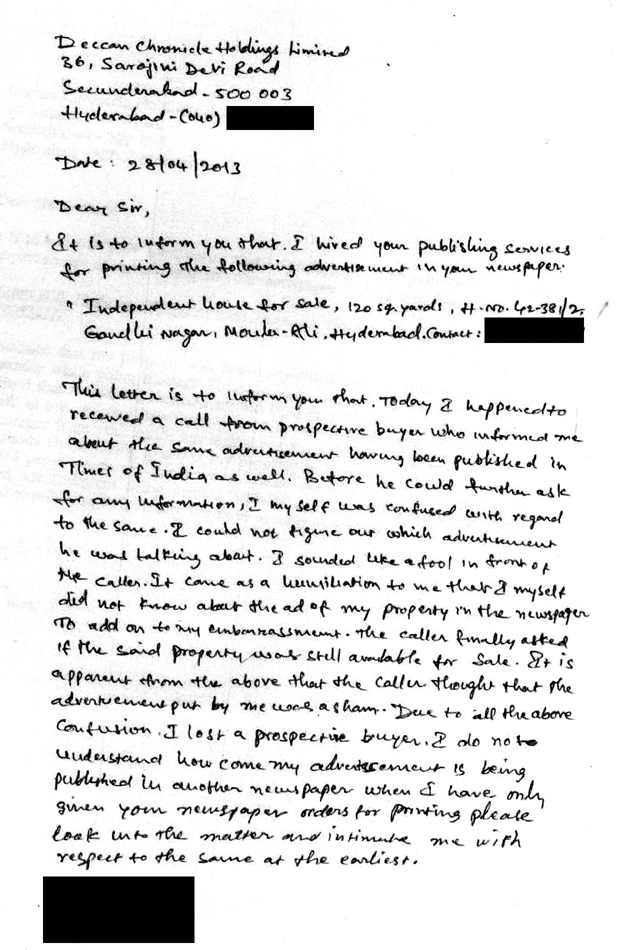 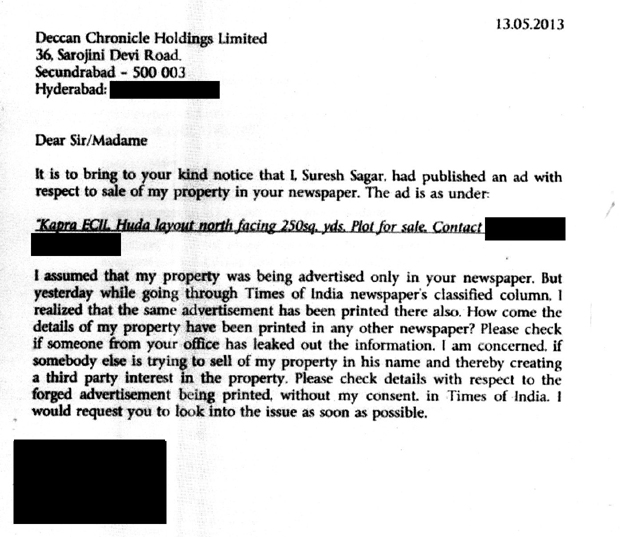 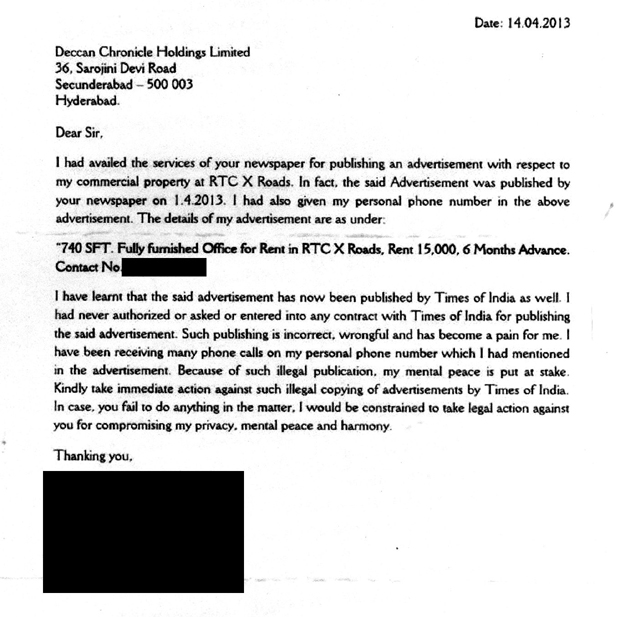 Crime never pays, yet it goes on unchecked. It’s a shame that ToI should resort to the lowly act of publishing advertisements published in DC. DC should pursue the matter and bring it to its logical end. Every newspaper has its readership and clientele. All newspapers should respect this and not try to survive on others’ achievements. — Nita B. George, Secunderabad

I  have been reading DC since five decades. It is the number one in news, views and advertising reach. The Times of India has lots of money to flaunt. So it is into gimmicks. But bash on regardless. DC is our Muddu Bidda. — Philip Joshua, Secunderabad

It is shocking to know that the classified ads of Deccan Chronicle are being stolen by ToI harming the interests of DC as well as the readers. What a shame? Such unethical practices should be discouraged and dealt with sternly by the Press Council of India. These days, the ToI is in the biz of paid news and plundered ads. — Dr D.V.G. Sankararao, Nellimarla, Vizianagaram

I was surprised to see the evidence produced by DC of The Times Of India stealing classified ads. It is beyond my imagination why national newspapers should resort to such dubious deeds. If this is true, it should be discouraged by the law. We readers usually believe the news that appears in newspapers. But if some newspapers resort to false representation of facts, then they must be taught a lesson. — Kasthur S.N., Visakhapatnam

The Times of India is certainly in the wrong. This cannot be tolerated. It knows very well that it cannot beat DC and is, therefore, stealing ads from it. It is the readers right to choose the newspaper they like. As a criminal complaint was filed by Deccan Chronicle Holdings before court and the court has directed the police to investigate the so called market leader under Section 120B, 379 and 467, we hope justice will be done to DC. — P.V. Trimula Rao, Hyderabad

I was taken aback when I read in DC that ToI is involved in the paid news industry. It will harm the image of ToI. We cannot conclude that advertisers gave the same ads to ToI for publication and had forgotten to replace the DC address with theirs. If this is an intentional act of ToI, it is inexcusable and should be viewed seriously by the authorities. — N.S.R. Murthy, Secunderabad

After reading the report on ad theft by ToI, I suggest the following lines  for your hoardings. “You have to pay for our ads. But the news is absolutely free.” — E. Prasad Rao, Hyderabad

The theft of DC’s classified ads by The Times of India, while despicable, proves right the suspicion that readers across India have harboured since ages: That the newspaper is full of paid news. This suspicion stemmed from the slanted stories it carries. Very often, it is too biased and not believable. If the news in ToI is not paid, how can it survive when it does not get revenue from advertisements since they are stolen? ToI’s thieving ways also prove that it is definitely not the readers’ or advertisers’ favourite, despite its tall claims, while DC knows the pulse of the readers. — Mir Qutubuddin Ali, Hyderabad

It is amusing to note that ToI, the grandma of English newspapers in India, is resorting to cheap tactics to gain readership. The action of ToI, to say the least, is totally unbecoming of a newspaper of its stature. It is nothing but cowardice. As rightly pointed out by DC, people had struck their bargains and the repeat ads made by them looks like a betrayal of the trust of the buyers. — P.G. Moorthy, Thiruvananthapuram

Deccan Chronicle’s revelation, with solid evidence, about the conduct of “dirty-tricks department” of The Times of India publications, (ToI-ing with the readers December 5), is not only surprising, but also disgusting. After answering the question “How”, DC itself is unable to understand “Why” does ToI do it? In the all-for-money driven world, people expect, at least, the judiciary and the media, especially the print, to stand tall by upholding ethical values in letter and spirit without falling prey to the tempting sweet-songs of the “Sirens”. However, the harsh reality seems to be different. It reminds me of the famous song of an MGR movie: Thridanai parthu thiruntha vital, thirutai ozhika mudiyathu (When the thief himself is unwilling to change his way of life, it is impossible eradicate the crime of theft). — Victor Frank A., Chennai

I have been a regular subscriber to Deccan Chronicle since 1997, since I shifted to Hyderabad from Vizag permanently. I was astonished to read that ToI is publishing ads that appeared in DC. It was unbelievable. Though I heard that some newspapers and TV channels resort to paid news, I never expected The Times of India to do it so blatantly and unabashedly. I wish that ToI news channel covers this without any reservations and tenders an unconditional apology. — G. Kannababu, Hyderabad

Since 25 years I am purchasing DC because of the classified ads and cinema pages even though I was working in Indian Express. When my colleague asked me about this I said that I wanted to see local ads and cinema. So as a Hyderabadi I prefer DC. — S. Ravi Kumar, Hyderabad

I am not surprised by ToI’s actions as DC is an addiction for readers. Often, when my paper boy delivers another paper, I go to a nearby shop and buy DC. In the past nine months, since I moved to Vizag, I continue to read DC. However, at times I get angry with the DC Vizag edition due to faulty news. ToI or any other newspaper can never be a supplement. — Vasudeva Rao, Visakhapatnam

I am very impressed with the way your newspaper is taking on the ToI. Way to go. — S.C., Bengaluru