New Delhi: In a setback to Mukesh Ambani-led Reliance Industries, the company will continue to get the old price of $4.2 mmBtu till it makes up for the shortfall in output from the KG-D6 block.  This even as the gas from RIL’s KG D6 block will be sold at new prices. RIL and the government are currently involved in arbitration on the issue of cost recovery from the block. “It is proposed that the difference between the revised price and the present price ($4.2 per million BTU) would be credited to the gas pool account maintained by GAIL and whether the amount so collected is payable or not to the contractors (RIL) of this block would be dependent on the outcome of the award of pending arbitration and any attendant legal proceedings,” the petroleum ministry said. 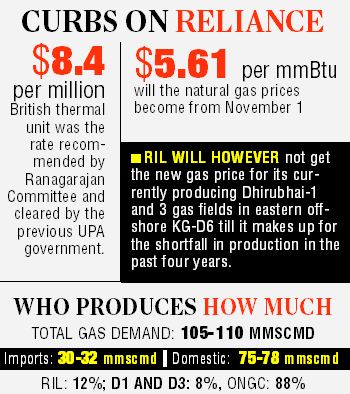 The UPA government had accepted the C. Rangarajan committee formula, which had sought to double the price of natural gas from domestic oil fields from April 1, 2014. However, the decision could not be implemented as the model code of conduct had set in due to the LS elections. The decision  then fell on the NDA government.

In August-end, the NDA government constituted a panel of secretaries to review the formula. The panel suggested modifications.

The petroleum ministry said that around 80 per cent of the additional revenue due to the revision in gas price will go to state companies.