Hyderabad: The damage wreaked by Cyclone Hudhud became clear on Tuesday, as the death toll rose to 24 in Andhra Pradesh and Odisha. Special commissioner K. Hymavathi of the AP Disaster Management Authority said 15 persons had died in Visakhapatnam district, five in Vizianagaram and one in Srikakulam.

Powerlines are still down and residents also went without water for a second day. “Every home in Vizag has been affected in some way,” said a police officer.

The Vizag airport will remain out of action. Trains, buses and telecom services are being slowly restored. Reports said the fishing harbour was damaged, and the Naval base affected. Prime Minister Narendra Modi will visit Visakhapatnam on Tuesday and undertake an aerial survey.

The state government is expecting that Prime Minister Narendra Modi will announce financial assistance and declare the cyclone as a national calamity.

AP Chief Minister N. Chandrababu Naidu had asked for the cyclone to be declared a national calamity and sought ad hoc relief of Rs 2,000 crore. Government officials meanwhile are trying to prepare a preliminary report for Mr Modi.

The state government is still to receive a complete report of the loss. Local officials estimate the losses in Vizianagaram district to be at Rs 125 crore and in Srikakulam district Rs 500 crore. Visakhapatnam district officials have not come forward with an estimate so far.

As of now, over 7,000 houses are said to have been damaged, and thousands of acres of crops like paddy, maize, vegetables and coconut, banana and betel have been damaged. About and 500 field staff and 100 engineers are working to restore power lines in Vizag.

Senior IAS officers who were appointed as in-charges in the cyclone affected districts to supervise relief work are expected to reach their respective places by Tuesday. Local district officials have also taken up relief work.

As many as five lakh people are being provided shelter in relief camps and AP government adviser Parakala Prabhakar said that 100 tonnes of food packets had been provided to the cyclone victims. He said that 50 tonnes each had been sent from Vijayawada and Rajahmundry.

According to preliminary reports, 6,695 houses have been damaged in the four districts apart from 109 railway lines and roads and 5,727 electric poles and transformers.

In Vizianagaram district, 19 tanks and canals were breached, 395 public properties were lost, 1,798 animals died, 73 drinking water sources were damaged and 181 boats were missed or damaged.

Meanwhile repair work at Visakhapatnam airport was on in full swing after a portion of the roof was blown away during Sunday’s gale force winds. 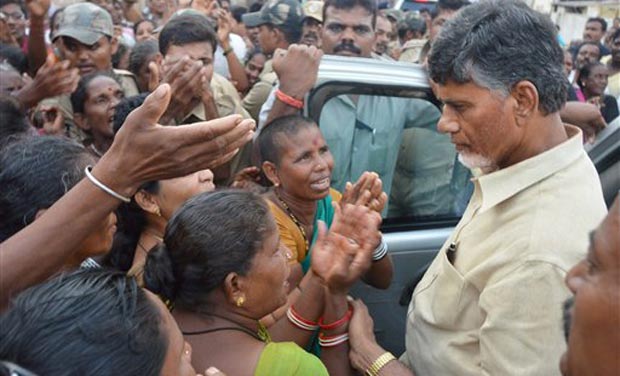 Restoration of the communication system was also taken up by cell phone companies. BSNL too restored its communication network at Visakhapatnam on Monday. Mr Prabhakar said that to restore the communications network, diesel transportation would be taken care of by the police department and added that the government was trying to restore all the telecom systems by Monday night or Tuesday morning.