United Nations Secretary General Ban Ki-moon waves as he takes a drive in Nairobi National Park, during his visit to the Nairobi Animal Orphanage in Nairobi, Kenya, on Saturday. (Photo: AP)
Nairobi: U.N. Secretary-General Ban Ki-moon capped off a week of high-level U.N. discussions on the environment by "adopting" a 6-month-old lion cub Saturday
The young lioness, which was found abandoned in Nairobi National Park, will be raised by the Nairobi Animal Orphanage. Ban named the cub Tumaini, which means "hope" in Kenya's language of Kiswahili, after his "hope that all people around the world will be able to live harmoniously with nature."
"I sincerely hope this lion will grow healthy, strong and even fierce," Ban said, drawing parallels with his hopes for the environment after this week's first U.N. Environment Assembly.
The assembly was the highest-level U.N. body ever convened on the environment. More than 1,200 participants from 193 member states spent the week in Nairobi, where the U.N. Environment Program is headquartered. Ban said he hopes to see U.N. member states adopt a climate change deal during formal talks in Lima in December. 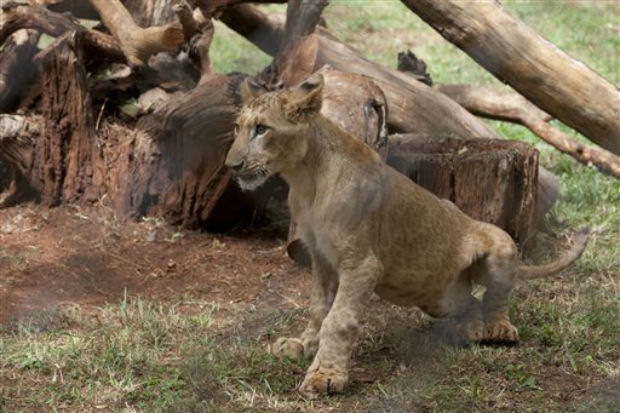 The lion cub Tumaini (Hope), whom United Nations Secretary General
Ban Ki-moon adopted during his visit to the Nairobi Animal Orphanage,
is seen in Nairobi, Kenya, on Saturday. (Photo: AP)
International environmental crime and terrorism ranked high on the assembly's agenda. Illegal timber and products of wildlife crime - such as elephant ivory and rhino horn - are smuggled through the same routes as illegal weapons. The Somali militant group al-Shabab makes tens of millions of dollars a year from the illegal charcoal trade. The Lord's Resistance Army, which U.S. forces are helping fight across central Africa, trade in elephant ivory.
Ban warned that popular discontent and criminal activity within countries could spawn international terrorism. He urged world leaders to address terrorism comprehensively, beginning within their countries' own borders.
"United Nations, through its global counterterrorism strategy, is trying to provide necessary assistance and work with African countries," Ban said. "The political leaders should always have inclusive dialogue and inclusive policies embracing all different groups of people. That is one fundamental principle which I have been looking to the world leaders to practice."
Citing Boko Haram's kidnapping of more than 200 Nigerian schoolgirls in April, Ban also said no country should have to handle counterterrorism efforts alone. A U.N. special envoy has met twice with Nigerian President Goodluck Jonathan to offer a support package to the country.
Kenyan President Uhuru Kenyatta met with Ban Saturday morning to discuss how to strengthen Kenya's security forces. The leaders also discussed security issues in Somalia, South Sudan and the Democratic Republic of Congo.
Ban's new lion cub is not the first exotic pet he's received as head of the U.N. In 2009 Mongolia presented Ban with a rare horse named Enkhtaivan, or "Peace," and in 2008 South Sudanese President Salva Kiir gave Ban a white bull named Ban Ki Moon.
...
Tags: united nations, kenya, world, ban ki-moon

UN calls for restraint after killing of Iranian nuclear scientist