It was the maiden budget for Sitharaman, who became the second woman finance minister after Indira Gandhi to do so in the history of independent India.

Sitharaman presented the full-year budget for the year ending March 2020.

01:22 pm: Sitharaman also proposed to increase custom duty on gold and other precious metals from 10 per cent to 12.5 per cent.

01:05 pm: She said, “I propose to increase special additional excise duty and road and infrastructure cess each one by 1 rupee a litre on petrol and diesel.”

01:03 pm: “To resolve the so-called Angel Tax issue, the startups and their investors who file requisite declarations and provide information in their returns will not be subjected to any kind of scrutiny in respect of valuations of share premiums,” she said.

01:00 pm: She said, “to discourage the practice of making business payments in cash I propose to levy TDS of 2 per cent on cash withdrawal exceeding Rs 1 crore in a year from a bank account.”

“As I stated earlier, we have taken a slew of measures to ease burden on small and medium earners. Those having annual income up to Rs 5 lakhs are not required to pay any income tax. We are thankful to tax payers who play an important role in nation building,” she said.

She also added that all companies having annual turnover of 400 crores, will now be under the bracket of 25 per cent. This will cover 99.3 per cent of all the companies.

12:52 pm: “More than 120 crore Indians now have Aadhar card, therefore for ease of tax payers I propose to make PAN card and Aadhar card interchangeable and allow those who don't have PAN to file returns by simply quoting Aadhar number and use it wherever they require to use PAN,” she said. 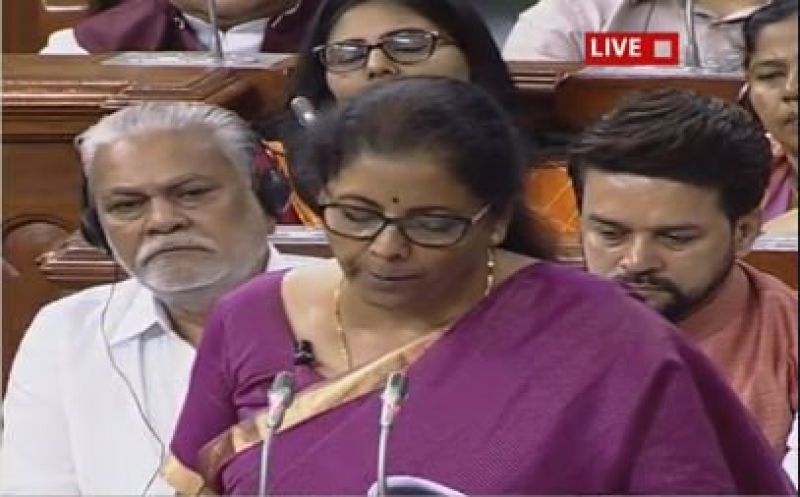 12:45pm: Government has already moved GST council to lower the GST rate on electric vehicles (EV) from 12 per cent to 5 per cent. Also to make EVs affordable for consumers our Government will provide additional income tax deduction of 1.5 lakh rupees on the interest paid on the loans taken to purchase EVs.

12:40 pm: Government has been following policy of disinvestment in non-financial public sector undertakings, maintaining government's stake not to go below 51 per cent.

12:35 pm: India's sovereign external debt to GDP is among the lowest globally at less than 5 per cent. Government will start raising a part of its gross borrowing program in external markets in external currencies.

12:26 pm: 'Gandhipedia' is being developed to sensitise the youth about positive Gandhian values.

12:25 pm: Speaking about banking sector, she said that Rs 4 lakh crore was recovered through NPA over last four years. She also mentioned that NPA was down by Rs 1 lakh crore in the last one year.

12:24 pm: She said that she proposes to consider issuing Aadhaar Card for Non Resident Indians (NRIs) with Indian passports after their arrival in India without waiting for the mandatory 180 days.

Read | Union Budget 2019: Govt proposes doing away with 180-day rule for NRIs to get Aadhaar

12:21 pm: To boost bilateral ties, she said, "To give further impetus to India's growing influence and leadership in the international community, Government decided to open Indian embassies and high commissions in countries where India doesn't have a resident diplomatic mission as yet."

“The government intends to open another 4 embassies, new ones, in the year 2019-20. This will not increase the footprint of India's overseas presence but also enable us to provide better and more accessible public services especially to the local Indian communities in these countries,” she added.

12:20 pm: To popularise sports at all levels, National Sports Education Board for development of sportspersons to be set up under Khelo India.

12:11 pm: For women, she said, “I draw attention to the women of India, 'Naari tu Narayaani'. This Government believes that we can progress, with greater women participation.”

“To further encourage women entrepreneurship, Women Self Help Group(SHG) Interest Subvention Programme to be expanded to all districts in India,” she said.

12:08 pm: She said that she is happy and satisfied to report that India will be made Open Defecation Free on October 2nd, 2019, as per the dream of PM Modi.

12:05 pm: Talking on framing Jal Shakti Ministry, she said, “Ensuring India's water security and providing access to safe drinking water to all Indians is a priority. A major step in this direction has been the constitution of Jal Shakti Ministry.”

She said this new Ministry will look at the management of our water resources and water supply in an integrated and holistic manner and will work with states to ensure 'Har Ghar Jal', to all rural households by 2024 under 'Jal Jeevan Mission'.

11:55 am: Speaking about the projects since 2014, she said, “9.6 crore toilets have been constructed since Oct 2, 2014. More than 5.6 lakh villages have become open defecation free. We have to build on this success. I propose to expand the Swachh Bharat mission to undertake sustainable sold waste management in every village.” 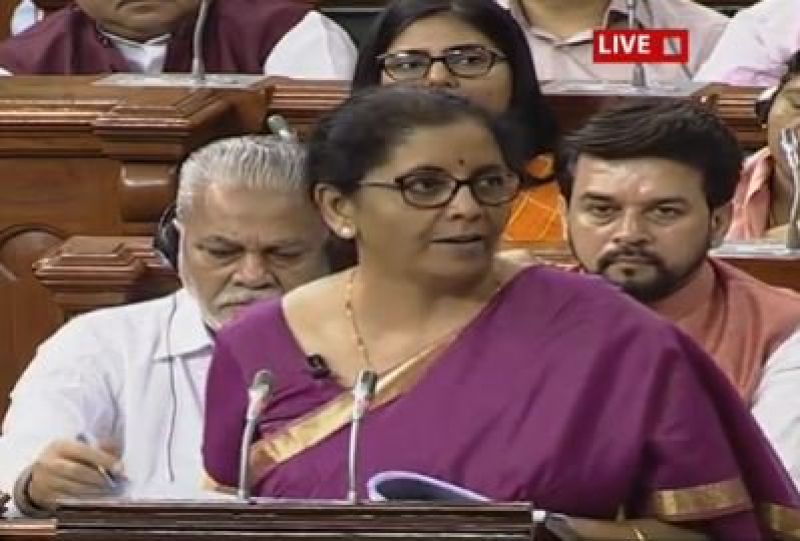 11:47 am: “India has emerged as a major space power. It is time to harness our ability commercially. To harness India's space ability commercially, a public sector enterprise, New Space India Limited (NSIL) has been incorporated to tap benefits of ISRO,” Sitharaman added.

11:45 am: She said that with the changing economic scenario it's important to upgrade roads connecting villages to rural markets. “For this Pradhan Mantri Gram Sadak Yojana phase 3 is envisaged to upgrade 1,25,000 km of road length over the next 5 years,” she added.

11:43 am: “Annual Global Investors' Meet to be organised in India, using National Investment and Infrastructure Fund(NIIF) as the anchor to get key sets of global players to come and invest in India,” she said.

11:40 am: Sitharaman said, “The FAME II scheme aims to encourage faster adoption of electric vehicles by the right incentives and charging infrastructure.”

“It's right time to consider increasing minimum public shareholding in the listed companies, I have asked SEBI to consider raising the current threshold of 25 per cent to 35 per cent,” she added.

11:38 am: “To deepen corporate tri-party repo market in corporate debt securities, government will work with regulators RBI and SEBI to enable stock exchanges to allow AA rated bonds as collaterals. User friendliness of trading platforms for corporate bonds will be reviewed, including issues arising out of capping of International Securities Identification Number,” she said.

11:35 am: In her maiden speech, Sitharaman said that the government will invite suggestions for further opening up of FDI in aviation sector, media, animation AVGC and insurance sectors in consultation with all stakeholders. 100 per cent FDI will be permitted for insurance intermediaries.

11:30 am: Sitharaman in Parliament said, “Rs 350 crore allocated for 2 per cent interest subvention for all GST-registered MSMEs on fresh or incremental loans.”

She said pension for shopkeepers and retailers with turnover less than Rs 1.5 crore to be launched under Pradhan Mantri Karma Yogi Maan Dhan Scheme.

11:27 am: In 2015, UDAY was launched for financial and operation turnaround of DISCOMs. We're examining performance and it'll be improved. We'll work with state governments to remove barriers, cross subsidy, surcharges, undesirable duties on open access sales, or captive generation for industrial and bulk power consumers.

She also added that the Government envisions using rivers for cargo transport which will also decongest roads and railways. 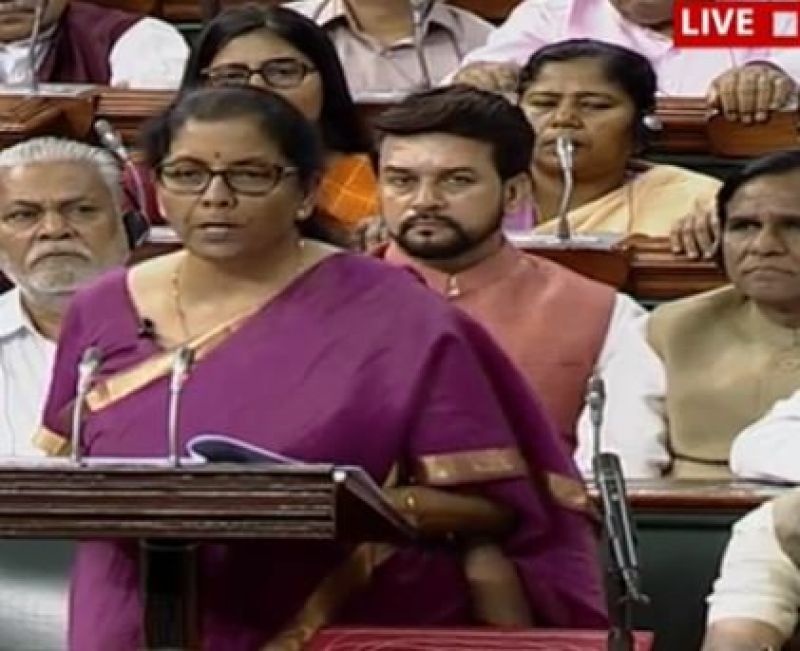 “Railway infrastructure would need an investment of Rs 50 lakh crores between 2018 and 2030. Public Private Partnership will be used to unleash faster development and the delivery of passenger freight services,” she added.

11:20 am: “We don't look down upon legitimate profit earning. Gone are the days of policy paralysis and license quota control regime. India Inc are India's job creators, nation's wealth creators. Together with mutual trust we can gain, catalyse past and attain sustained growth,” Sitharaman said in Budget speech.

11:18 am: Schemes such as 'Bharatmala', 'Sagarmala' and UDAN are bridging the rural and urban divide, improving our transport infrastructure.

11:12 am: Sitharaman said that the Indian economy will grow to become a USD 3 trillion economy in the current year itself. It is now the sixth largest in the world. 5 years ago it was at the 11th position.

“It took us over 55 years to reach USD 1 trillion dollar economy. But when the hearts are filled with hope, trust and aspiration, we in just 5 years, added USD 1 trillion,” she added.

11:09 am: “The first term of PM Narendra Modi led NDA government stood out as a performing government and between 2014 to 2019; it provided a rejuvenated centre-state dynamics, cooperative federalism, GST council and strident commitment to fiscal discipline,” said Sitharaman.

11:05 am: While presenting the Union Budget, Sitharaman said, “The recent election was charged with brimming home and desire for a bright and stable 'New India'. Voter turnout was highest; every section came to stamp their approval for performing Government.”

10:50 am: Union cabinet approves Budget 2019. It will be presented by Finance Minister Nirmala Sitharaman at the Lok Sabha shortly.

10:37 am: Parents of Finance Minister Nirmala Sitharaman - Savitri and Narayanan Sitharaman - arrive at the Parliament.

#WATCH Delhi: Parents of Finance Minister Nirmala Sitharaman - Savitri and Narayanan Sitharaman - arrive at the Parliament. She will present her maiden Budget at 11 AM in Lok Sabha. #Budget2019pic.twitter.com/TnV5xu6ZRX 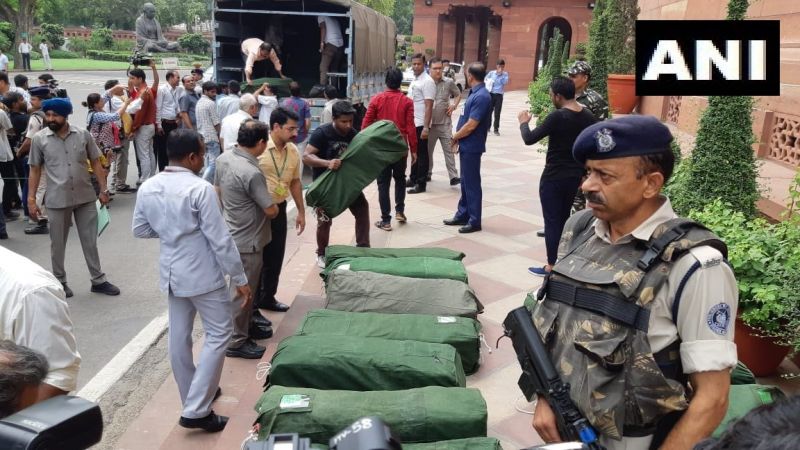 09:40 am: As per tradition, Finance Minister Nirmala Sitharaman calls on President Ramnath Kovind before presenting the Union Budget. 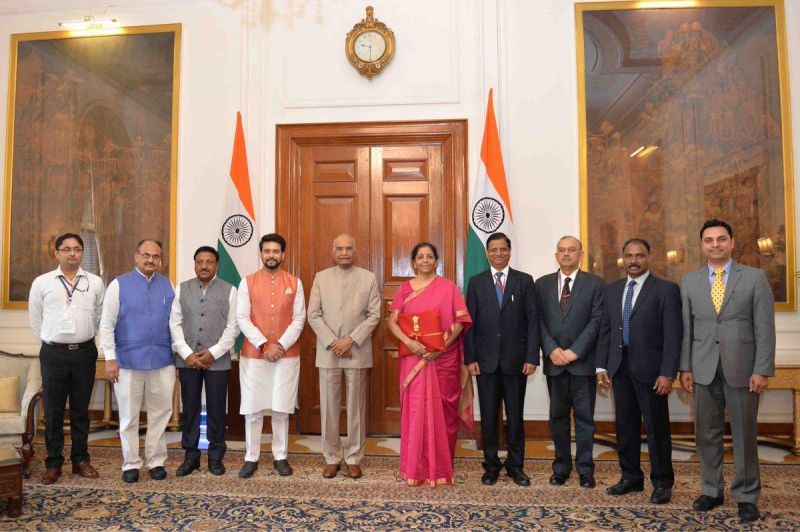 09:30 am: “It is in Indian tradition. It symbolizes our departure from slavery of Western thought. It is not a budget but a 'bahi khata'(ledger),” said Chief Economic Advisor Krishnamurthy Subramanian on Nirmala Sitharaman keeping budget documents in four fold red cloth instead of a briefcase. 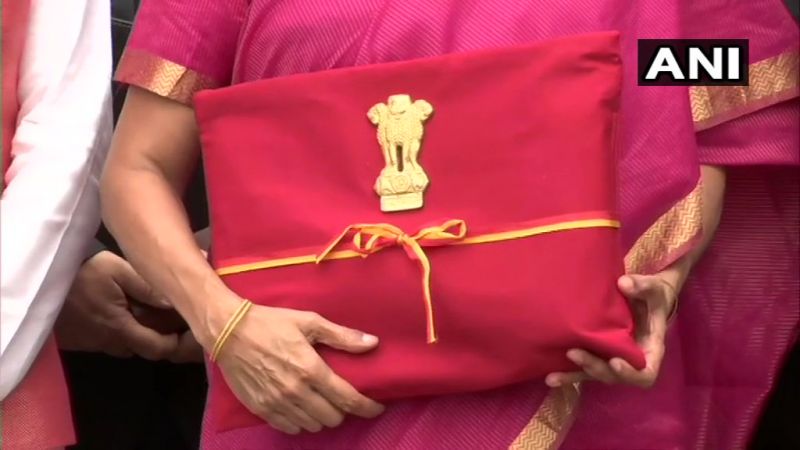 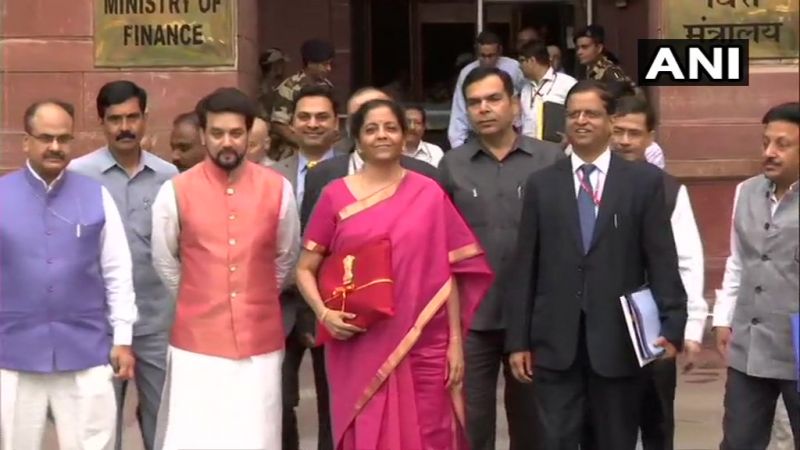 08:46 am: Finance Minister Nirmala Sitharaman arrives at Ministry of Finance. 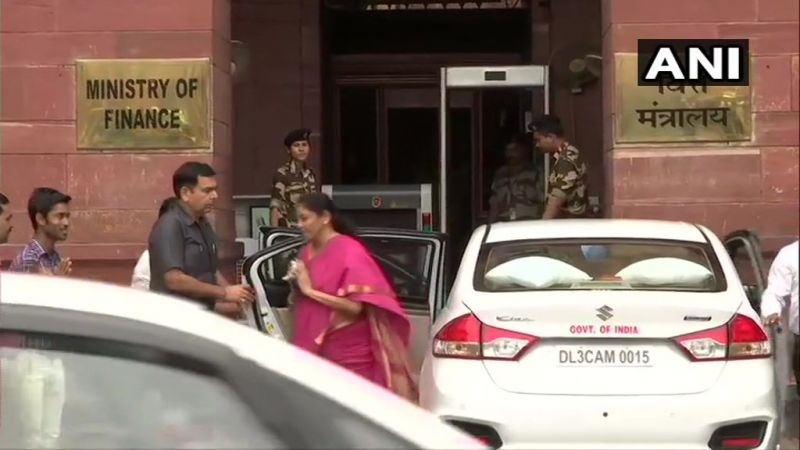 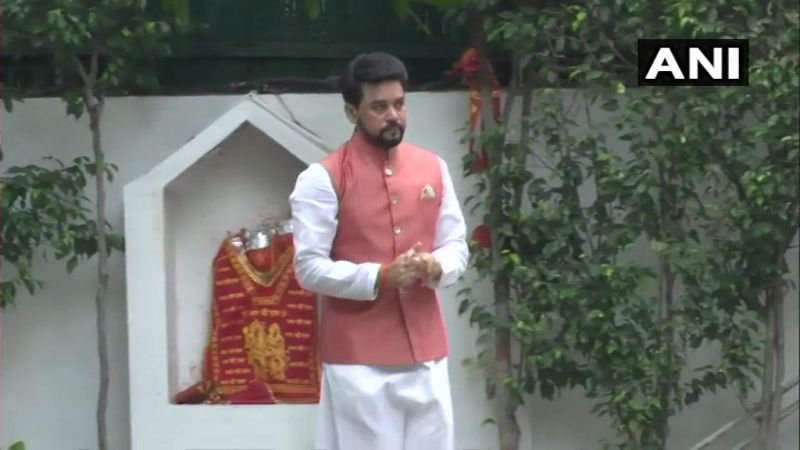 The Budget speech began at 11:00 am with an address to the speaker of Lok Sabha.

Usually the duration of the presentation ranges from 90 to 120 minutes.

Read | Union Budget 2019: What to expect from Sitharaman's first Budget

The Railway Budget was also be presented on Friday along with the Union Budget. This practice was also begun in the year 2016, where the practice of presenting the rail budget separately was discarded.

The Finance Minister on Thursday tabled in Parliament the pre-Budget Economic Survey for 2018-19, which projected the state of the economy and outlined its challenges. The survey was released by Chief Economic Adviser Krishnamurthy Subramanian on Thursday.

This was be the 89th Union budget, which is the financial statement of the government, detailing its revenue and expenditure in the past, as well as estimated spending and projections for the coming year.

GHMC pays for plants washed away in 2020 floods

Congress to corner Centre on China