Fellow passengers, who saw Ashwin travelling in the packed train went gaga and took selfies with him.

Chennai: On a day when roadblocks and protests brought Chennai to a standstill, the city’s metro rail came to the rescue of several office-goers and even a few celebrities including Indian ace cricketer R Ashwin.

The offspinner, who landed at the Chennai airport from Kolkata, found himself stranded and took the metro to reach his residence at West Mambalam.

Fellow passengers, who saw Ashwin travelling in the packed train went gaga and took selfies with him before he alighted at the Ashok Nagar police station. “Such situation dictates the usage of public transport thanks to the airport police for taking me safely,” tweeted Ashwin. 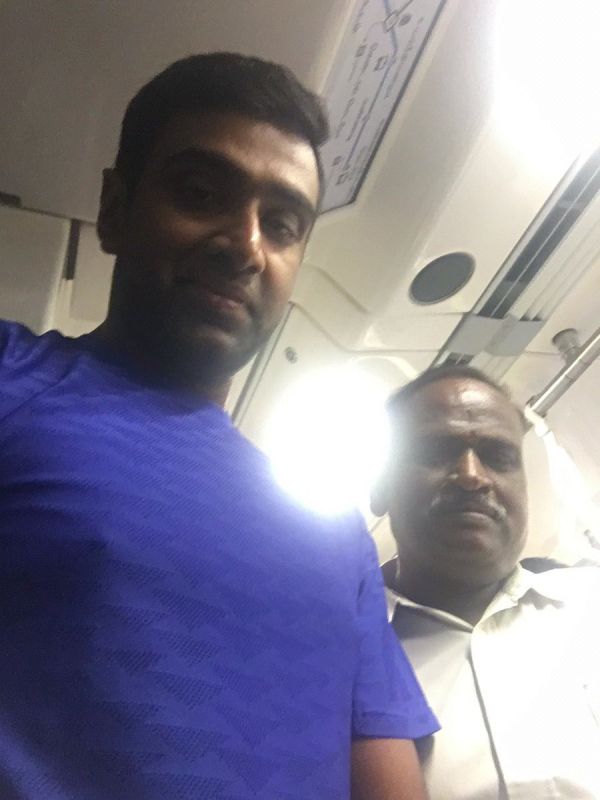 Metro rail came to the rescue of several office-goers and even a few celebrities including Indian ace cricketer R Ashwin. (Photo: R Ashiwn/Twitter)

Tension also prevailed at Ekkatuthangal metro railway station as protesters locked the shutters of the metro station for some time and the issue was resolved after the police cleared demonstrators.

With auto rickshaws fleecing the public, IT professionals and the passengers scheduled to board flights also boarded metro rail to reach Chennai airport during the crisis day. According to Chennai metro rail sources, the trains were jam packed throughout the day and this is the second time after cyclone Vardah, the air conditioned coaches came in handy for the public to travel safely.

“I work in Guindy and I had to pick up my son from his school in Ashok Nagar. Though a few autos were available, the roads were blocked by protesters. I then took the metro to pick-up my son and reach home,” said N. Balaji, an IT professional.

“My daughter was stuck at her school and was able to pick her up on time only because of metro”, said a panic struck passenger B. Meenakshi, a resident of Saidapet."

Sharing their experiences, the passengers also demanded early completion of metro rail stretches. “I live in K.K. Nagar and approached an auto driver who demanded Rs 200. So I took the metro to reach Vadapalani, it was safe and cheap,” said B. Vijaya, a receptionist working at Koyambedu.