Raising slogan ‘we want justice’, the protesting students said, 'either there should re-examinations of all subjects or else of neither.' (Photo: Twitter | ANI)

New Delhi: Students in Delhi are holding massive protests at Jantar Mantar, demanding the Central Board of Secondary Education (CBSE) to hold a re-examination for all papers, instead of just the two which the education board on Wednesday said were leaked.

Raising slogan ‘we want justice’, the protesting students said, “either there should re-examinations of all subjects or else of neither.”

Protesting students said that besides Class 10 mathematics and Class 12 economics papers, many other papers were leaked ahead of the examinations.

Talking to media on Thursday, Congress spokesperson Randeep Surjewala said that without removing Union HRD Minister Prakash Javadekar and CBSE Chairperson Anita Karwal from their current positions, a fair and impartial investigation into this paper leak issue is impossible.

The Congress leader also questioned about why the post of CBSE chairman has been left vacant for two years. “Post Vyapam and SSC,  now three papers of CBSE have also been leaked and as per students, some more papers have also been leaked. There was an error in evaluation of Class 12 exams in 2017. Why was the post of CBSE chairman left vacant for 2 years?, said Surjewala.

Congress President Rahul Gandhi said there was a ‘leak everywhere’ under the Modi government.

Read: 'Chowkidar' weak as there is leak everywhere: Rahul's dig at PM Modi

Another Congress leader Shashi Tharoor also took to Twitter and wrote: “The CBSE leak is a disgrace & accountability is essential. Officials must be culpable, yet it is innocent students who will be punished.”

Talking to the media, Union HRD Minister Prakash Javadekar on Thursday assured that the culprits responsible for the leak will be caught. “I also could not sleep, I am also a parent,” he said.

Javadekar on Wednesday said "2-3 papers had been leaked on WhatsApp 30 minutes before the exams".

A special investigation team of Delhi Police has been formed to look into the matter.

In the course of investigations, Delhi Police have interrogated 25 people, mostly students who had access to the handwritten question papers. The police are hoping to work backwards to trace the source.

CBSE has said it would announce the new exam dates by the end of the week for Class 12 economics and Class 10 mathematics papers, which were cancelled on Monday.

The education board said it has received a complaint by an unknown source on March 23 claiming that the perpetrator runs a coaching institute, and also named two schools from the same vicinity as complicit in the leakage, the CBSE conveyed to the Delhi Police on Thursday. 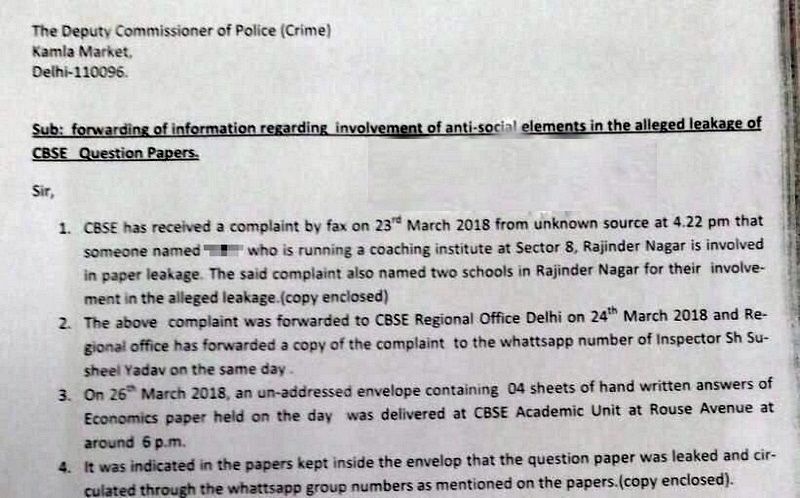 The police have said that they have recovered snapshots of the handwritten question papers, which were being circulated on WhatsApp, from the man. They are also trying to trace the source of the WhatsApp messages, but are facing problems because of the end-to-end encryption.

Prime Minister Narendra Modi has also expressed his unhappiness about the leak. According to reports, the PM dialled education minister Prakash Javadekar after the CBSE decided to set fresh tests.

The leaked economics paper was being circulated on social media, including WhatsApp, several hours before the test was about to commence on Monday.

On March 15, the Delhi government said it received complaints from the CBSE about the Class 12 Accountancy paper being leaked.