The Class 10 Maths examination was held on Wednesday, while the Economics exam for Class 12 was held on Monday. (Photo: File)

New Delhi: The Central Board of Secondary Education (CBSE) has decided to conduct re-examination for the Class 10 Maths and Class 12 Economics papers.

In a statement, the CBSE said, "Board has taken cognizance of certain happenings in the conduct of certain examinations as are being reported. With the view to uphold the sanctity of the Board Examinations and in the interest of the fairness to the students, the Board has decided to reconduct the examinations in the following subjects (Class XII -- Economics and Class X Mathematics).”

"Dates for fresh examinations and other details shall be hosted on the CBSE website within a week," the statement added. 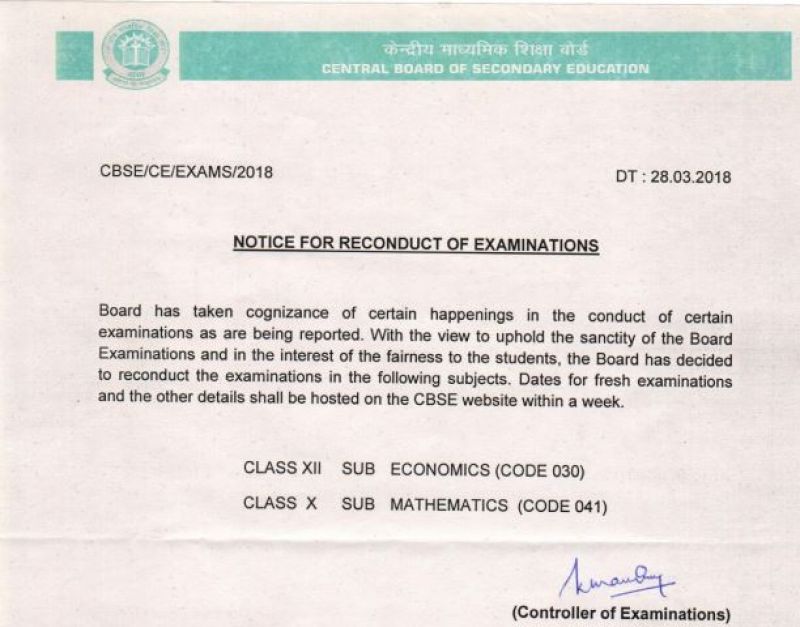 Speaking to the media, Javadekar said that some parts of the paper were leaked on WhatsApp and an FIR has been filed regarding it.

"Investigation is underway and strict action will be taken. We have also decided to tighten security for the time when papers are being distributed," he added.

The minister said that although the examinations are conducted across the country, paper leak has been reported only from a few schools in Delhi.

Cabinet has approved for National Testing Agency to come into effect from next year to ensure leak-proof examination, he said.

There were claims on social media that the Economics paper was leaked on Monday ahead of the exam even as the CBSE denied any slip up.

Reports of the question paper being leaked circulated through social media and WhatsApp several hours before the paper commenced.

The Class 10 Maths examination was held on Wednesday, while the Economics exam for Class 12 was held on Monday.

275 Indians brought back from Iran quarantined in Jodhpur

Coronavirus will reach your villages, families through you: Kejriwal to migrants

Bengaluru sealed off: 2 years jail for violating quarantine, one month for wandering

From tomorrow, she's not going to just stand around being photographed

Assam has no corona+ cases, but decides to shut down anyway until March 31