INX case: CBI tells court Chidambaram not cooperating, gets him for 4 days

After his arrest, doctors from the Ram Manohar Lohia Hospital conducted medical examination at the CBI headquarters. (Photo: PTI)

New Delhi: Former finance minister P Chidambaram, who was arrested by the Central Bureau of Investigation on Wednesday night from his residence in connection with INX media corruption case, was produced in a special CBI court on Thursday.

Chidambaram was kept in lockup number 5 in CBI custody on Wednesday night after being medically examined by doctors of the Ram Manohar Lohia Hospital. It is learnt he hardly responded to questions by CBI sleuths.

Chidambaram is accused of facilitating foreign investment into television company INX Media in 2007, when he was Finance Minister. Investigators say this was done at the behest of his son Karti, who allegedly received kickbacks.

Chidambaram was first named in the case by then INX owners Peter and Indrani Mukerjea, who are in jail for the murder of Indrani’s daughter Sheena Bora.

Things might get somewhat tricky for the former finance minister, as Indrani – co-accused in the money-laundering case – has reportedly turned approver and given crucial information on Chidambaram’s alleged role in the money laundering.

Here are LIVE updates from Thursday:

06:24 pm: CBI sources have told ANI, "CBI is also investigating the trail of payments in several companies abroad and letter of Rogatory (LR) have been sent to the concerned countries."

04:48 pm: When P Chidambaram said in court he wants to speak, Solicitor General Tushar Mehta objected and said that he is being represented by two senior advocates.

Abhishek Manu Singhvi in reply said there is Delhi HC Judgement that allows the accused to make a representation on his behalf.

04:30 pm: Abhishek Manu Singhvi argues that, "CBI’s entire case is based on Indrani Mukherjea's evidence and a case diary."

04:19 pm: Kapil Sibal said, "This is the case which has nothing to do with evidence but with something else."

04:10 pm: Kapil Sibal argues that, "Last night CBI said that they wanted to interrogate Chidambaram, they didn't start the interrogation till 12 noon and asked him only 12 questions. By now they should know what questions to ask. The questions had nothing to do with Chidambaram."

04:02 pm: Kapil Sibal in the court said, "Investigation complete as draft chargesheet is ready. Sanction was sought. Foreign Investment Promotion Board approval is given by 6 Govt Secretaries, none of which have been arrested. This is a case of documentary evidence. He(Chidambaram) has never skipped interrogation."

03:55 pm: Kapil Sibal argues for P Chidambaram in Court said, "The accused in this case is Karti Chidambaram who was granted regular bail by the Delhi High Court in March 2018. Other accused also got bail. Peter and Indrani Mukerjea on default bail."

03:48 pm: Solicitor General Tushar Mehta said, "This is a classic case of money laundering. We are at the pre-chargesheet stage, material with him, he remained non-cooperative."

03:43 pm: Solicitor General Tushar Mehta argues for CBI in Court says, "right to silence is constitutional right and I have no issue, but he is non cooperative, he was evasive to questioning."

03:34 pm: Solicitor General Tushar Mehta argues for CBI in Court says, " We have moved an application seeking 5-day custody of P Chidambaram." CBI says in Court that on application of CBI a non bailable warrant was also issued and on that basis the arrest was made.

03:18 pm: P Chidambaram brought to CBI court for hearing in INX Media Case. He will be produced in court shortly.

03:00 pm: P. Chidambaram being taken from CBI Office to court for hearing in INX Media Case.

02:23 pm: Investigating Officer (IO) in INX media case, Rakesh Ahuja has been transferred back to Delhi Police. Enforcement Directorate (ED) has clarified that Rakesh Ahuja's term in ED was over 3 weeks back, ANI reported.

02:21 pm: Mamata Banerjee came out to support Chidambaram and said, "The way Chidambaram's matter is being handled is very depressing."

She also said, "Sometimes the process is incorrect...I'm not talking about the legality...He is a senior politician...He was the finance and home minister of the country...We are missing democracy in our country."

02:17 pm: Senior advocate and Parliamentarian Vivek Tankha has reached the CBI court at Rouse Avenue. Tankha said, "We are expecting him [Chidambaram] to be produced before court by 2:15 pm."

01:45 pm: The CBI questioning of Chidambaram is over. The questioning went on for approximately 3 hours. CBI investigation has now gone for legal consultation to finalise the remand application and court procedures, seeking the former finance minister's custody, reported India Today.

01:07 pm: According to sources, reported by India Today after 2 hours and 30 minutes of questioning, P Chidambaram is being non-cooperative and his replies are evasive. Officials say it could be one of the grounds on which custody will be sought. Chidambaram maintains that last year when he joined the probe, he was called as a witness.

Chidambaram has denied putting any pressure on FIPB officials. He also said that he didn't interfere in his son Karti's business.

Further, Chidambaram refused to recall any meeting with Indrani and Peter Mukherjea in March/April.

12:15 pm: BJP leader Girijaj Singh on Wednesday hit out at Congress for defending its senior leader P Chidambaram. "If his conscious was clear, why he was hiding for 28 hours? Democracy was murdered in this country, only during the emergency. Those who committed a crime, must be punished," he said.

12:00 pm: Senior Congress leader P Chidambaram's son has alleged that the government wanted to "silence his father" as he is a critic in the opposition. Karti Chidambaram said: "Government is using a non-case as a political tool to harass the most vehement critic of the Govt, this is being done to silence him."

11:35 am: Hours after the arrest of his father and former union minister P Chidambaram in INX media case, Congress leader Karti Chidambaram on Thursday said that he will be attending the protest called by his alliance partner DMK over the abrogation of Article 370.

"I will go to Jantar Mantar for protest. The protest there is about Article 370 but if the alliance partners raise this issue (of P Chidambaram's arrest), of course, we will raise the issue as well. Our whole party, alliance partners and DMK leader MK Stalin have condemned the arrests yesterday," he told reporters at the Delhi airport.

11:30 am: Congress leader Kapil Sibal said that Chidambaram's arrest is a matter of great concern.

"When a high court rejects an anticipatory bail and that also after the person has been protected for 15 months in one case and about 13 months in the other case, the judge hears the matter, reserve order on January 25 and then passes an order after seven months, not giving us enough time to move the supreme court."

Kapil Sibal said, "In those circumstances, the supreme court should have allowed the hearing. All that we wanted was a hearing."

11:14 am: P Chidamabaram is likely to be produced in CBI court anytime between 2 and 4 pm.

11:00 am: Chidamabaram to be produced in the court of special CBI Judge Ajay Kuhad at Rouse Avenue.

10:56 am: Senior Congress leader Salman Khurshid on Thursday termed the arrest of party leader P Chidambaram as 'deeply distressing' and said "we are very confident there is no case against him".

"It's deeply distressing that all that happened (arrest). The matter is listed for hearing on Friday. They could have waited until then to see what the Supreme Court wants to do. We are very confident that there is no case against Chidambaram," Khurshid said.

Chidambaram, one of the key ministers during ten years of UPA regime, was taken to headquarters of the probe agency after CBI officials scaled the boundary walls of his residence in Jor Bagh on Wednesday night to arrest him in connection with the INX Media case.

The Congress leader also slammed the BJP accusing the party of orchestrating the arrest. "This is being done by a government that claims to have come to power in the name of the rights of the citizens," Khurshid said.

10:44 am: Congress leader P Chidambaram's son Karti Chidambaram on Thursday denied knowing Indrani and Peter Mukerjea and said that he had no connection with them or their company. He also said that P Chidambaram's arrest was done to target the Congress party.

10:30 am: Congress spokesperson Randeep Surjewala addressed the media on P Chidambaram’s arrest and said, “India witnessed broad daylight murder of democracy and the rule of law in last two days”. He said the government was using CBI, ED as "personal revenge seeking departments".

Referring to Indrani Mukherjea's accusation that the Chidambaram's had taken cutbacks in the INX deal, Surjewala retorted, “A seasoned politician has been arrested on the statement of a woman who is charged with the murder of her own daughter.”

10:20 am: Kapil Sibal said, “It's a matter of great concern to us as members of the legal fraternity, also it should be a matter of concern as citizens. All we wanted was a hearing, the presiding judge chose instead to say that I am sending the file to CJI. Isn't a citizen entitled to be heard?”

10:00 am: Karti Chidambaram landed in Delhi in the morning. He said, “This is not merely targeting my father but the Congress party as well. I will go to Jantar Mantar to protest.” He said he had never met Indrani Mukerjea or her husband Peter.

“The only time I've seen Indrani was when CBI took me to confront her. I have had no interaction with anyone directly or indirectly connected with their company,” he added.

09:50 am: Karti Chidambaram arrives at Delhi Airport from Chennai. 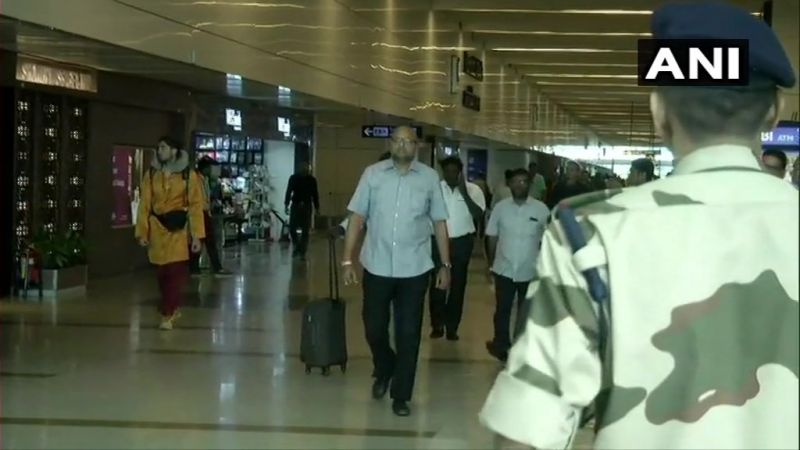 09:30 am: Satya Pal Singh, Baghpat BJP MP said, “Chidambaram is a former Union Finance and Home Minister. He is an intellectual and knows the law. He should not have behaved like this after the court's order. What happened was not good. Had he surrendered earlier, his dignity would have remained intact.”

Read | Confident there is no case against Chidambaram: Cong leader Salman Khurshid

09:00 am: Salman Khurshid on P Chidambaram’s arrest said, “It's deeply distressing that all that had to happen, there was no question of not being answerable to the law.” He said the matter was listed on Friday and the probe agency could have waited till then.

06:30 am: Karti Chidambaram said that his father’s arrest was done to divert attention from the issue of Article 370.

Missing from Tuesday evening — soon after the Delhi High Court refused him anticipatory bail — Chidambaram surfaced at the Congress headquarters on Wednesday evening to claim innocence. In a brief address he said he had not committed any offence and that he had all faith in the law “even if it was implemented by an unequal hand of probe agencies”.

Read | What is the INX media case and how are the Chidambarams involved?

Shortly before his address on Wednesday night, Chidambaram held a press meet at the Congress headquarters. He had said: ''I have not been accused of any wrongdoing in INX media case... no chargesheet was filed by either ED or CBI before a competent court.'' He left the Congress office exactly after six minutes.

Probe agencies — unable to find him in the last 24 hours — were hot in pursuit and reached his Jor Bagh home soon after. Officers scaled the walls and jumped inside as the gate was not opened.

As batches of officers reached Chidambaram’s home, some of them were allowed to enter the house. He was bundled into an Ertiga by CBI officials around 9.45 pm Wednesday and whisked away.