Chidambaram spends night at CBI headquarter which he inaugurated in 2011

Chidambaram, one of the key ministers during ten years of UPA regime, was taken to headquarters of the probe agency after CBI officials scaled the boundary walls of his residence in Jor Bagh on Wednesday night to arrest him in INX Media case. (Photo: CBI website)

New Delhi: Senior Congress leader P Chidambaram, as then union home minister had participated in the inauguration of the new Central Bureau of Investigation (CBI) headquarters in Delhi's Lodhi Road area in 2011- the same building where he spent Wednesday night after being arrested by the Central probe agency.

The Congress leader, who served as Union Home Minister during November 2008 to July 2012 in the UPA government, was one of the key guests at the inauguration event of CBI headquarters, held on June 30, 2011, in the presence of then Prime Minister Manmohan Singh. 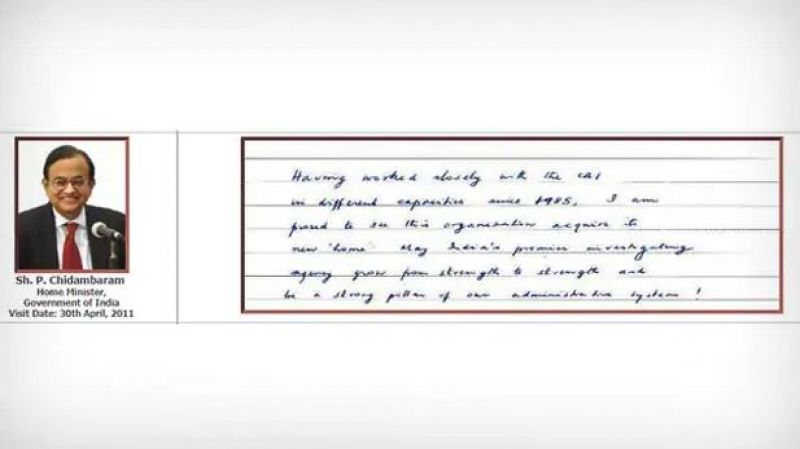 Chidambaram, one of the key ministers during ten years of UPA regime, was taken to headquarters of the probe agency after CBI officials scaled the boundary walls of his residence in Jor Bagh on Wednesday night to arrest him in INX Media case.

CBI, which issued a lookout notice against Chidambaram arrested him after he made a dramatic appearance at the Congress headquarters in Delhi and addressed a press conference in which he rejected the charges against him and his son in the INX Media case and said "lies" were being spread by "pathological liars."

On Wednesday, the former minister failed to get relief from the Supreme Court over CBI and ED's pursuit of him as the matter was not heard by the court despite repeated efforts of his lawyers. He is likely to be produced before a CBI court at the Rouse Avenue on Thursday.

CBI sources said that Chidambaram was arrested on an arrest warrant issued by a competent court.

The CBI and ED filed caveats in the Supreme Court over Chidambaram's plea seeking protection from arrest in the INX media case.

The CBI had on late Tuesday night put up a notice outside his residence to appear before them in two hours prompting his lawyer to request the investigation agency not to take any coercive action until the hearing of Chidambaram's plea in the Supreme Court on Wednesday.

The Congress leader's lawyers had moved the apex court against Tuesday's Delhi High Court order dismissing his anticipatory bail plea regarding cases filed by the CBI and the ED related to the alleged INX Media scam.

Solicitor General Tushar Mehta opposed the plea of Chidambaram and said this is a case of money laundering of monumental magnitude.

Maoists should be counselled by their kin: Ramagundam top cop