Deepika reacts to engagement rumours with Ranveer, kids; he wants to ‘do lot of it’

Deepika Padukone and Ranveer Singh have acted in three films together.

Mumbai: From ‘Bajirao Mastani’ to their international ventures and paychecks, Priyanka Chopra and Deepika Padukone have always been pitted against each other. But their recent ‘competition’ is well and truly out of the blue.

We are talking about the two actresses’ respective ‘engagements’. While rumours of Deepika exchanging rings with Ranveer have been going on since late last year, reports of Priyanka making it official with Nick Jonas soon has surprised everyone and gossip mills now wonder who will be first one to it.

While Priyanka has not uttered a word about Nick or their relationship, except calling him her ‘favourite’ man, Deepika recently reacted to her engagement rumours again.

"I try and keep it separate as much as possible, but I don’t try to fight or control the speculation," she told Evening Standard.

Though her answer can neither be taken as confirmation or denial, the actress hoped her marriage is just like her parents’, "The way they are as a couple, the way they have held the family together. They are amazing role models."

When asked if she will go the family way post marriage, she replied, "Absolutely — I want to have kids."

On a completely unrelated note, her rumoured would-be husband Ranveer had an interesting response to one of her recent Instagram posts.

So the actress shared a picture from a photoshoot for the aforementioned magazine with the quote, “Marc Jacobs once said “let’s do what we love and do a lot of it!”

And Ranveer being Ranveer replied on the post, “Marc is right. We should do lot of it.” 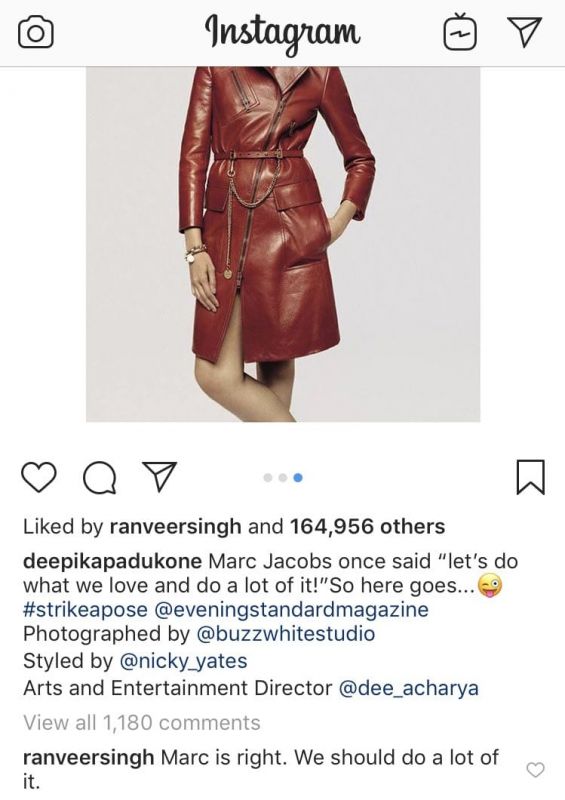 Whether pun was intended or not, we love the couple's constant banter and hope to see them engaged soon.

■Deepika reveals which celeb she’d leave Ranveer for, reacts to engagement rumours
■I definitely want to have lot of babies before I die: Deepika Padukone
■After Virushka, will it be Deepveer this year? Deepika's friends react
■Was advised cosmetic surgery, says Deepika, shares how depression story helped others
■Along with Priyanka Chopra, Nick Jonas also likes Deepika Padukone
■Forget beating Deepika to be highest-paid, Priyanka doing Salman's Bharat for free?