British Prime Minister Theresa May said on Friday she would quit, triggering a contest that will bring a new leader to power. (Photo:AP)

London: British Prime Minister Theresa May bowed out after nearly three years as prime minister on Friday, defeated by her inability to deliver Brexit. Fighting back tears, British Prime Minister Theresa May said on Friday she would quit, triggering a contest that will bring a new leader to power who is likely to push for a more decisive Brexit divorce deal.

Here are highlights of her tumultuous time in office:

July 13, 2016 – In her first speech as prime minister, May appears in Downing Street, pledging to fight the “burning injustices” that hold people back. She promises “a country that works for everyone” but will in fact find herself spending much of her time struggling with Brexit.

2017 Jan 18,– A triumphant May is portrayed on the front page of the Daily Mail next to the headline “Steel of the New Iron Lady”. She has just given a defiant speech, telling Brussels: “No deal for Britain is better than a bad deal for Britain.”

May 22, 2017 – May is forced to backtrack on an election pledge to force the elderly to pay more for care after her opinion poll lead fell by half. “Nothing has changed,” she says to general incredulity.

June 4, 2017 – Responding to Britain’s third militant attack in three months – the killing of seven people at London Bridge – May declared “enough is enough” and added: “Defeating this ideology is one of the great challenges of our time.”

June 8, 2017 – Despite an apparently impregnable opinion poll lead, May loses her parliamentary majority in a general election called early. Despite repeated promises of a “strong and stable” government, her authority is in tatters. 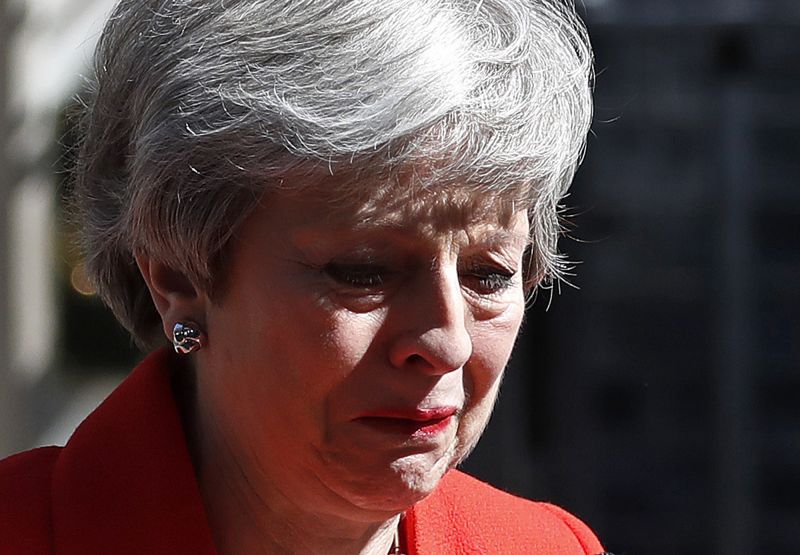 British Prime Minister Theresa May reacts as she turns away after making a speech in the street outside 10 Downing Street in London, England, Friday, May 24, 2019. Theresa May says she'll quit as UK Conservative leader on June 7, sparking contest for Britain's next prime minister. (AP Photo/Alastair Grant)

Oct 3, 2017 – May’s big speech to the Conservative Party conference was interrupted by repeated coughing fits, a prankster, and even letters of her slogan falling off the stage scenery. As a bid to reassert herself, it had limited success.

Oct 3, 2018 – May startles the audience at the Conservative Party conference when she appears on stage for a speech jigging to Abba’s “Dancing Queen”. It was apparently a self-deprecating reference to her dancing during a recent visit to Africa, but she was nonetheless widely mocked.

Dec 14, 2018 – A furious May is embroiled in a public row with Jean-Claude Juncker at a Brussels summit after the EU chief publicly called Britain’s Brexit demands “nebulous” and “vague”. Juncker joked that they had later kissed and made up, but the incident showed that relations were sub-optimal.

Dec 17, 2018 – At an EU summit in Salzburg, an unforgiving photo shows a red-jacketed May cold-shouldered by a phalanx of male leaders in dark suits.

Jan 19, 2019 – Lawmakers vote down May’s Brexit divorce deal by the crushing margin of 432 to 202, the worst such defeat in modern British history. Labour Party leader Jeremy Corbyn calls a vote of no confidence, which May however survives.

May 21, 2019 – In a last roll of the dice, May promises a “new deal” on Brexit. It is immediately rejected by large numbers of Conservative lawmakers and the opposition Labour Party.

May 24, 2019 – May announces she will quit on June 7, her voice breaking with emotion during a Downing Street address to the nation. She describes herself as “the second female prime minister, but certainly not the last”.

Afghan council meets to decide on release of 400 Taliban prisoners

Russia to have mass COVID vaccination campaign by October

'Safe' corona vaccine being given to hundreds of people in UK