A US official said the strikes had targeted chemical production facilities. Another official said multiple types of bombs were used, and a variety of targets chosen. (Photo: AP | Hassan Ammar)

Shortly after Trump began a White House address to announce the action, large explosions were heard in the Syrian capital Damascus, signalling a new chapter in a brutal seven-year-old civil war.

"A short time ago, I ordered the United States armed forces to launch precision strikes on targets associated with the chemical weapons capabilities of Syrian dictator Bashar al-Assad," Trump said in a primetime televised speech to the nation.

"A combined operation with the armed forces of France and the United Kingdom is now under way. We thank them both. This massacre was a significant escalation in a pattern of chemical weapons use by that very terrible regime."

A US official said the strikes had targeted chemical production facilities. Another official said multiple types of bombs were used, and a variety of targets chosen.

Trump also warned Russia and Iran not to stand by their ally in Damascus.

Also Read: Many dead in missile attack on Syrian air base, France, US deny role

"Russia must decide if it will continue down this dark path or if it will join with civilized nations as a force for stability and peace," he argued.

The strikes had been expected since harrowing footage surfaced of the aftermath of the alleged toxic gas attack in the Damascus suburb of Douma, which took place a week ago, and Trump reacted in an emotional tweet.

"Many dead, including women and children, in mindless CHEMICAL attack in Syria," he declared.

Trump's anger and apparent determination was quickly matched by France's President Emmanuel Macron, who signed his country up for a joint response. 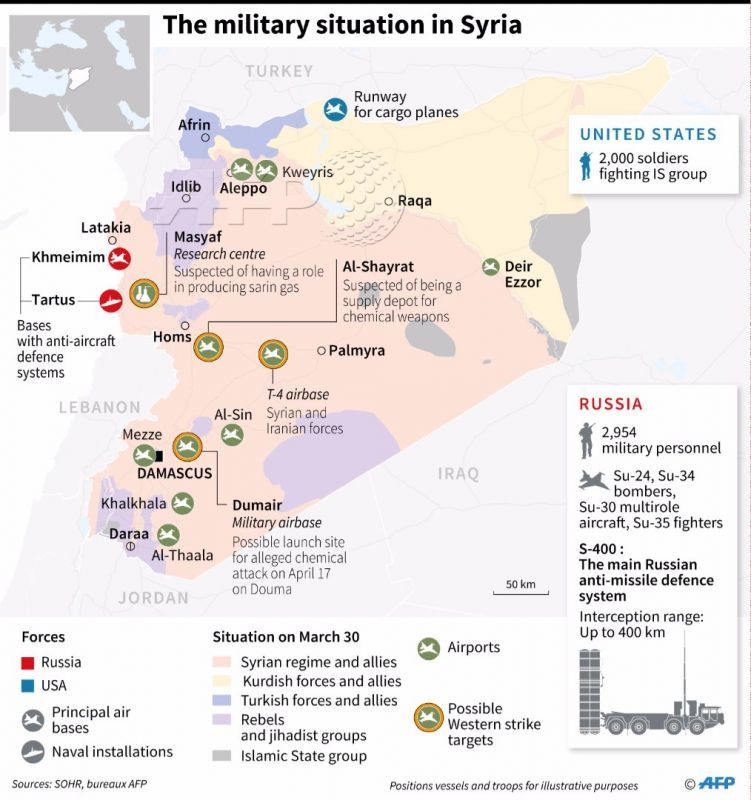 Britain's Prime Minister Theresa May was more cautious, but by the time the first precision cruise missile was launched, Trump had a mini-coalition.

May said there was "no practicable alternative" to the use of force against Assad.

Trump's language was more brutal: "They are crimes of a monster."

In the six days between the attack and the US-led response, Washington and Moscow clashed repeatedly in duelling press statements and US debates.

Moscow denied its ally Assad had any role in the outrage, pushing a variety of alternative theories that peaked with a claim that Britain had staged the event.

More practically, at the United Nations, Russia's diplomats vetoed a US motion to re-establish an international investigation into chemical weapons use in Syria that could have established blame.

Washington, Paris and London have nevertheless insisted that their own secret intelligence points to Assad's guilt, and on Friday, a US spokeswoman said they had "proof."

The western leaders apparently found this convincing enough reason to launch a punitive strike, but other observers are concerned that the crisis could escalate.

The Russian military had vowed to respond to any attack, and Russian President Vladimir Putin's administration had repeatedly warned that Trump was taking America down a dangerous path.

That concern was mirrored by United Nations Secretary-General Antonio Guterres, who on Friday warned the rival camps against "full-blown military escalation."

"Let us not forget that, ultimately, our efforts must be about ending the terrible suffering of the Syrian people," he urged the United States, Russia, China, France and Britain.

And he stressed the need "the need to avoid the situation spiraling out of control."

But Trump has long criticized his predecessor Barack Obama for failing to enforce a previous US "red line" in 2013 after earlier chemical attacks blamed on Assad's forces.

And he set his own precedent just over a year ago when he ordered a cruise missile strike on a Syrian air base after sarin was fired at civilians in the town of Khan Sheikhun.

Backed by his hawkish new national security adviser John Bolton, who took office on Monday, Trump has been meeting with advisors and generals all week to plan.

Defense Secretary Jim Mattis has reportedly been arguing for a cautious response that would minimize the risk of the US being dragged deeper into Syria's civil war.

But other advisors want to use the opportunity to convince Trump, who wants to pull US forces out of Syria once the Islamic State jihadist group is defeated, to take a tough stance.

These hardliners, along with influential US allies Israel and Saudi Arabia, want Washington to counter Iran's growing power in Syria -- even if it means risking a perilous stand-off with Russia.

■Russia slams US military strikes in Syria, warns of consequences

'India is a part of me': Google CEO Sundar Pichai after receiving Padma Bhushan

Amazon loses 10% of its vegetation in nearly four decades

3 US-based economists given Nobel Prize for work on banks

Gunman kills 5 at gay nightclub in US, subdued by patrons