WhatsApp—the one single mobile app that is making the internet communicators anxious each time the messaging platform releases new features. WhatsApp is the largest most popular messaging application that is used on smartphones and a survey by Jana recently revealed in a survey that almost 95 per cent of Indian smartphone users are on WhatsApp.

Also read: WhatsApp to get new ‘mention’ feature ahead

WhatsApp is a no-fuss, completely free and easy to use messaging app. The app has one of the fastest communication means, is secure and uses only your mobile number as an activation. Almost every other week, WhatsApp developers rollout some features that are first tested with beta testers and then released to public for world-wide use. However, information from beta users leak out and the feature creates an excitement between WhatsApp users. Same was the case when WhatsApp launched the voice calling feature—people were excitedly waiting for the release and those who had it were stalked to call them from WhatsApp since it was an invite only feature initially. If you receive a call from a user who has the voice calling feature, your WhatsApp will also have that feature enabled.

Also read: All of 40 WhatsApp features, tips and tricks you should know

Taking advantage of this ‘feature by invite’ system, many scamsters took to WhatsApp and sent out messages with scam links and a message stating that they are invited to enable voice calling only after they click and share the message. These messages are usually with links to websites with malware and advertisements. Each time a user clicks there, the scamster makes the money. The message then asks you to share the same message to 10 more users and groups and only then it will enable the voice calling feature to you. However, after all the exercise and the clicks, you find out that it was a hoax. 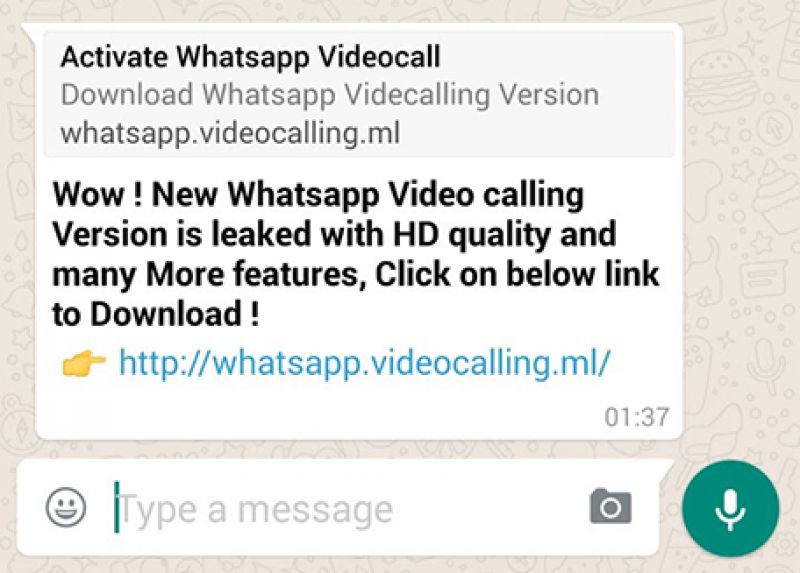 And now, this time, it is the similar case about WhatsApp’s upcoming feature on video calling. A new hoax message has been circulating around on various groups, which lure users with an invitation to activate video calling. The message is almost identical to the older voice call invitation.

A similar fake message on WhatsApp video calling activation was doing its rounds in May this year.

As spotted and reported by the Emirates 247, the message reads out that one can download the video calling updated app after clicking on the said link. However, at present, the link seems to be down.

Also read: WhatsApp Gold Edition: Yes it is a scam, a hoax

We urge WhatsApp users to stay away from such hoax messages and not to forward these messages to your friends or on groups. Messages like these could have malicious links that could put your smartphone’s data at risk.