Elari Nanophone C review: All you need, nothing you don't

The moment you take the Nanophone C out of the box, you might mistake it for a remote controller of a car’s audio system. (Photo: Deccan Chronicle)
Rating:

Verdict: The Nanophone C is claimed to be a “digital detox” minimalist device to put you away from the chaos of modern complicated smart mobile computing. However, we see it as a useful accessory to your premium (primary) smartphone that can happily do all the donkey work of dealing with voice calls, while leaving your powerful smartphone for all the ‘elite’ features and functions. Even if you want to rely on it completely, like your daily driver, then the Nanophone C has all that it requires keeping you entertained in an old-fashioned way. At Rs 2,999, it seems to be a great option for a second mobile phone that can gel with your daily gadget requirements with a wide array of necessary features.

Yes, it's a given that smartphones are definitely getting bigger, fragile and complicated each day. The iPhone X is a perfect example — despite having roughly a 5-inch form factor, it managed to house a display bigger than the iPhone 8 Plus and is made out of materials so exotic that a simple drop might shatter your heart. Couple that with the complicated touch-based gestures and complex menus, and you are looking at a big learning curve. Not only the iPhone but all premium smartphones of today are alike — they are unnecessarily complicated. However, you still ‘want’ one of these ultra-expensive slabs of glass and metal to keep you connected and up your status quo, but make sure it is protected and safe. There is a way to keep an ultra-premium smartphone with you all the time without leaving it to nature’s mercy — the second phone. 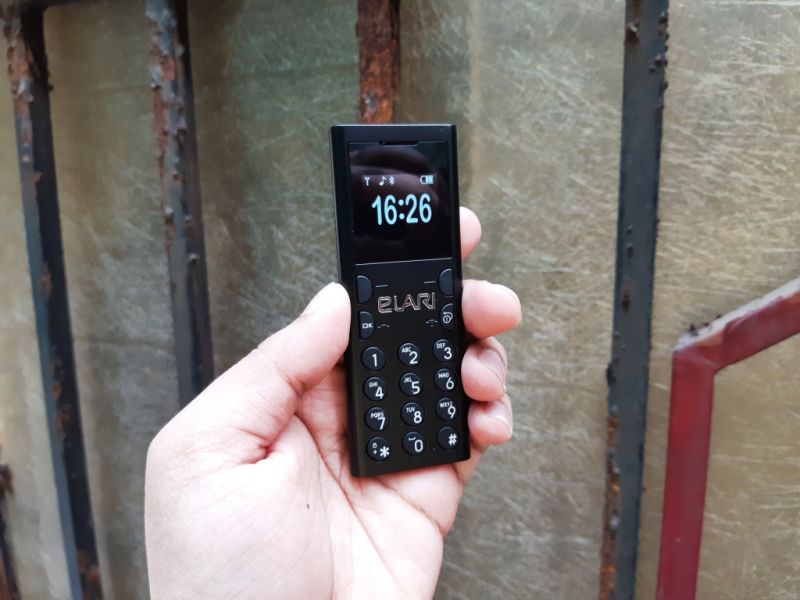 A Russian firm, known by the name of Elari, has something to tackle this first-world issue. Their Nanophone C is a Bluetooth headset that also happens to be a basic feature phone. The asking price for one of these is Rs 2,999, which is fairly on par with other expensive Bluetooth earphones and standard feature phones. Hence, we laid our hands on a Nanophone C to find out if it can just be an assistant to your smartphone or does it go an extra mile.

We pulled out the Nanophone C out of its box, and boy, we mistook it for a tiny remote control (similar to those seen on a car’s audio system). Measuring just 94.4 x 35.8 x 7.6 mm (WHD), it isn’t exactly ‘nano’ in any sense, but is comparatively smaller than most conventional feature phones (for example, JioPhone or Nokia 3310). If you truly want the smallest phone, then you should perhaps consider the Zanco T1.

At 30g, it's very light, great for those worried about carrying an additional weight in their pockets (we actually misplaced it in our pocket most of the time). There was one time it almost ended up in the laundry. The side edges are curved, which impart a sense of 'premiumness' and makes it draw eyeballs from the surroundings. 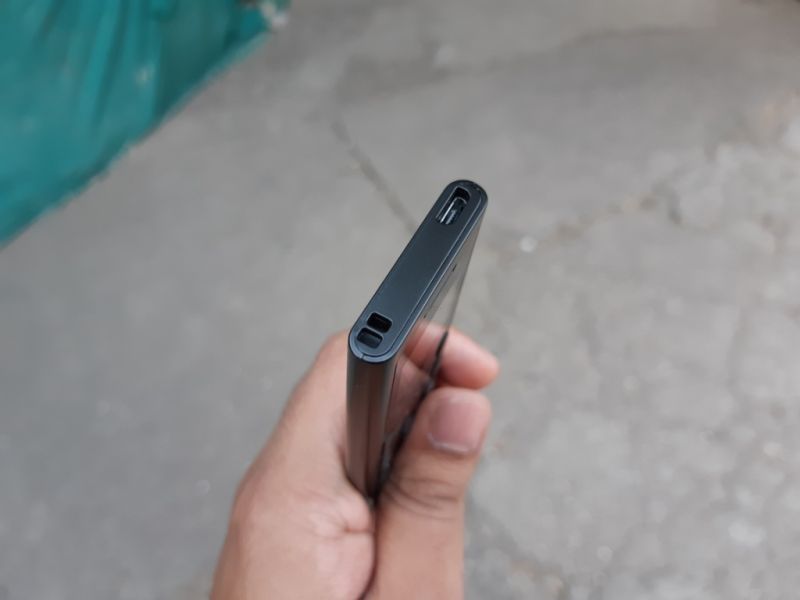 The top and bottom are flat — the former houses the micro USB charging port  along with a provision for a lanyard cord, whereas the latter houses a speaker, a 3.5mm headphone jack (good for those smartphone users with no dedicated headphone jack — yes, this one can stream your music from your primary handset to your earphones via Bluetooth) and two separate slots for micro SD (up to 32GB) and 4G SIM each (Jio guys can stay away) 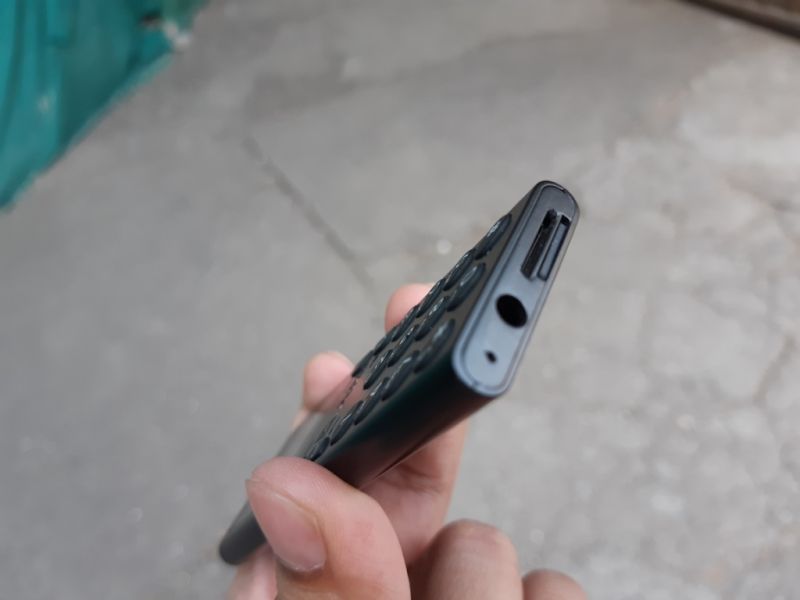 The Nanophone C is built with care — the body is made out of soft-touch plastics which is pretty rugged. We accidentally dropped our unit multiple times and it showed no signs of damage. There’s a T9 rubber keypad along with two buttons for navigating through the interface and two buttons for handling the calling functions (the call receiving button also acts as an ‘OK’ button). However, what irked us is Elari's branding that seems out of proportion when compared to the ‘nano’ theme that follows throughout the rest of the product. Additionally, the keypad is low on tactile buttons — you have to press the buttons harder to register an input properly.

The Nanophone C sports a 1-inch LCD display, which sounds pretty tiny for any phone by today’s standards. However, Elari has managed to make efficient use of the available space with a clever UI that focuses on things that the user needs the most in a feature phone. It would make no sense to talk about colour reproduction, picture quality or viewing angles since this display does not produce images or videos. But if you still care — it's on par, if not better, than some conventional feature phones out there. The interface follows a monochromatic theme, although you can change the themes from a selection of four built-in presets. Sadly, they cannot be added or modified. 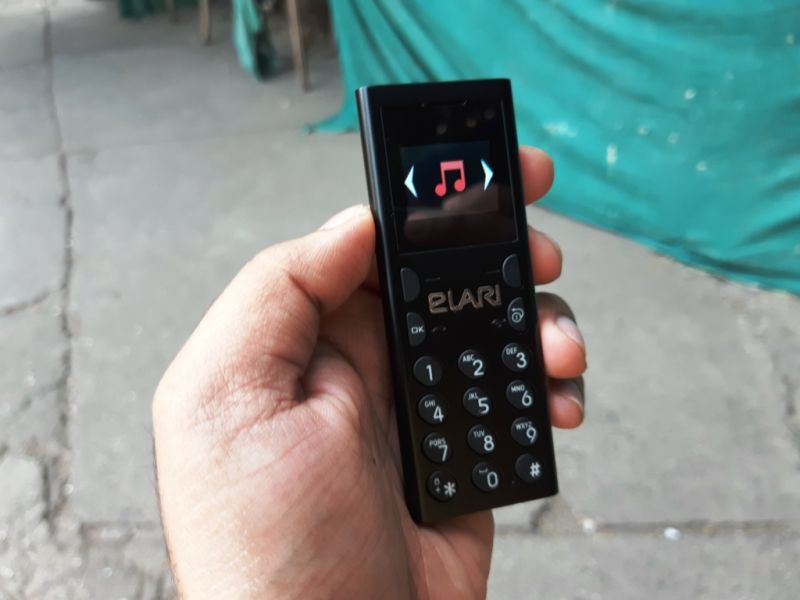 The C runs on Elari custom operating system RTOS, which is one of the most clever and unique feature phone operating systems we have seen around. It incorporates tabbed browsing on the Phone Dialer window — one for the call list on the phone’s SIM card and the other one for the call list on your primary smartphone connected via Bluetooth. Note that you will need to give access to your contacts and call lists form your primary smartphone in order for this to work. The Settings menu is a tad confusing initially; however, in a few days, you can master the same.

Despite following a minimalist theme, you will not be let down by its features. You can enjoy MP3 tracks stored on the micro SD card, or even tune in to your favourite FM channel. You can also pair a Bluetooth headset with the Nanophone C.  And when it comes to music, it manages to put on a good show. The Nanophone C also has a stereo speaker setup, where the earpiece acts a secondary speaker while playing music — a great feature that is rarely seen on such low-end phones today. However, we noticed that phone heats up a bit while playing music on the internal speakers. Elari has also thrown in voice recording and a voice modulating feature for those who want more out of this kid. 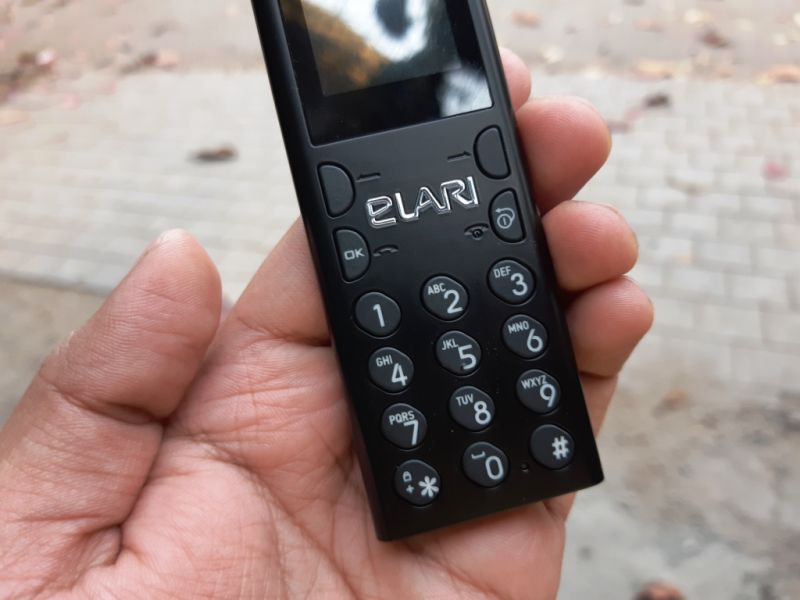 If you are interested about the phone's guts — here goes: The Nanophone C is powered by a MediaTek MT6261D chipset along with a puny 32MB of onboard storage (good enough for just 1,000 phone contacts). The same chipset is usually found on MediaTek-powered wearables and wireless speakers. However, since there’s no way to modify the system’s content in the form of apps or any form of downloadable content, the performance remains fluid from the beginning. We never encountered lags or issues with the device. 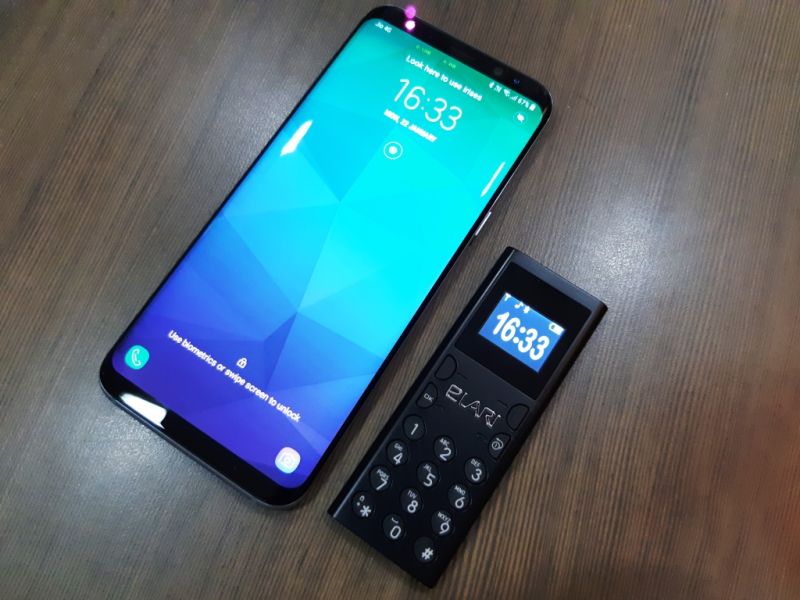 When connected to your primary smartphone, the Nanophone C is happy to act as your handheld Bluetooth headset. Audio quality is clear with no noticeable noise and is easily audible even in crowded spaces — thanks to the stereo speaker setup. In fact, we preferred receiving or making calls through the Nanophone C while outdoors, with a sense of being contended about keeping our primary smartphone in the safety of our trouser pockets. However, we wished that this phone also managed to display smartphone notifications and messages, just like smart wearables can. Elari — you now know what you have to include in your next nano, right? 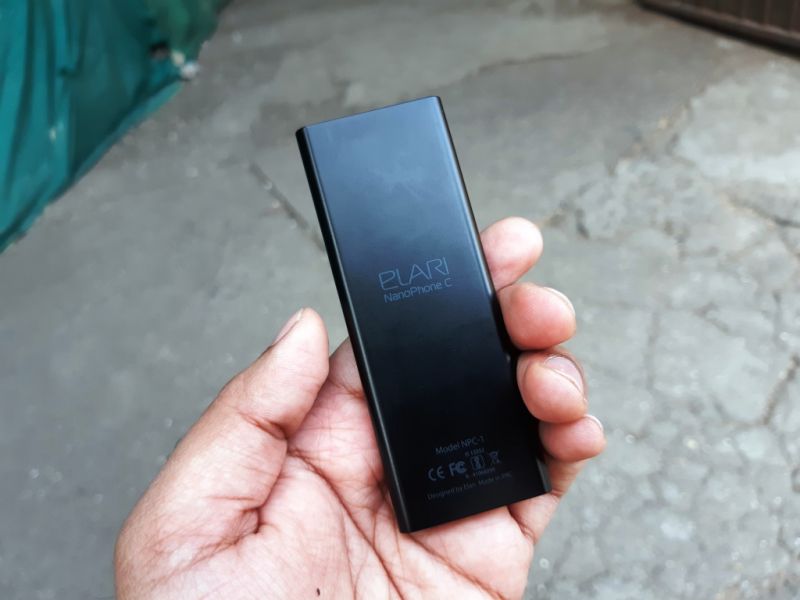 Despite all productive features, battery life is the primary criteria that decides the usefulness of any mobile gadget and we found the Nanophone C keeping us online for close to a whole day. The 280mAh battery is pretty tiny but equally manages to last even more than a day provided you are using the Nanophone C moderately. As for standby, Elari claims it lasts up to four days.

If you are looking to spend a limited budget on a second phone that can act as your primary calling booth, then the Nanophone C fits the bill. It can make calls, text, play music and FM, making it a mini ‘all-that-you-need’ device. Take it out for your run, or simply leave your primary handset behind to enjoy your dinner with your loved ones. The capability to connect to a smartphone and act as its extension puts the cherry on the cake, making it a must-have device for gadget enthusiasts. However, this phone is the best alternative for those who want to detox themselves from the hassles of the smartphone-connected life, or to provide their children, help and employees with a basic voice-calling instrument. The Nanophone C is a cute and tiny smartphone that won't give you the ugly looks of a "Cheaply built Chinese instrument", and is a great alternate phone to rely on.

With inputs from Francis D'Sa, Editor