The JioPhone can do most of the stuff that you require on a smartphone in 2017 but may not be the best medium to do so.
Rating:

If we have to define the features that make a perfect mobile phone in 2017, then we will have to use the following nouns — large ‘narrow-bezel’ AMOLED display, long-lasting battery, the latest software and a pair of great camera sensors. But spin the clock 10 years back to 2007 and your description of a perfect phone would be something with a T9 keyboard and the ability to at least open the Google search page. Nevertheless, people enjoyed those phones as they never had to worry about the pesky stuff such as software updates and compatibility as well as the concerns of carrying an additional power bank to keep the device juiced up. The newer generation of phones simply doesn't give those thrills. 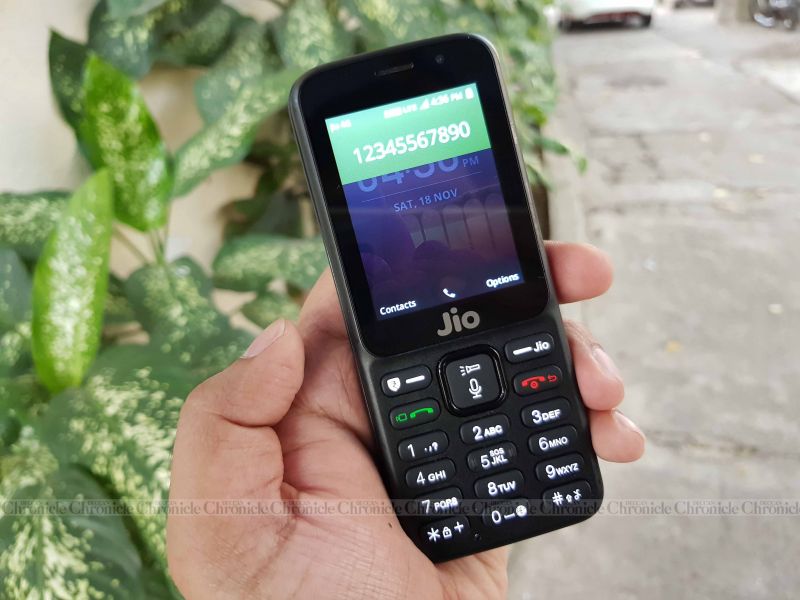 Earlier this year, Reliance Jio had announced the JioPhone that promised to bring the conveniences of a modern smartphone to the feature phone-crowd for a relatively affordable price. That seemed like a tall claim, especially after Nokia’s reincarnated 3310 with standard feature phone features was out of reach for most of the intended crowd segment. Therefore, we decided to take the JioPhone switch as our daily driver and find out if it can really throw stones at the modern smartphone. After all, how can a ‘hyped’ feature phone possibly prove its worth higher than that of a modern conventional smartphone? 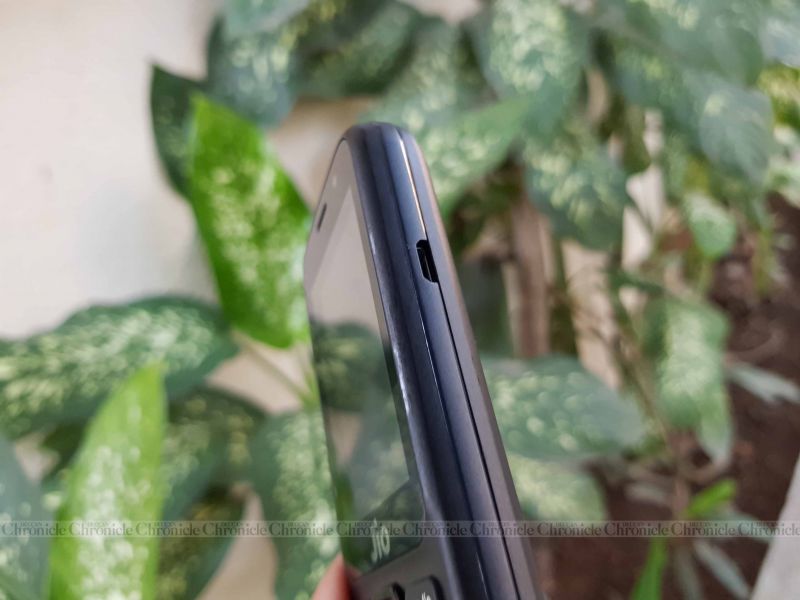 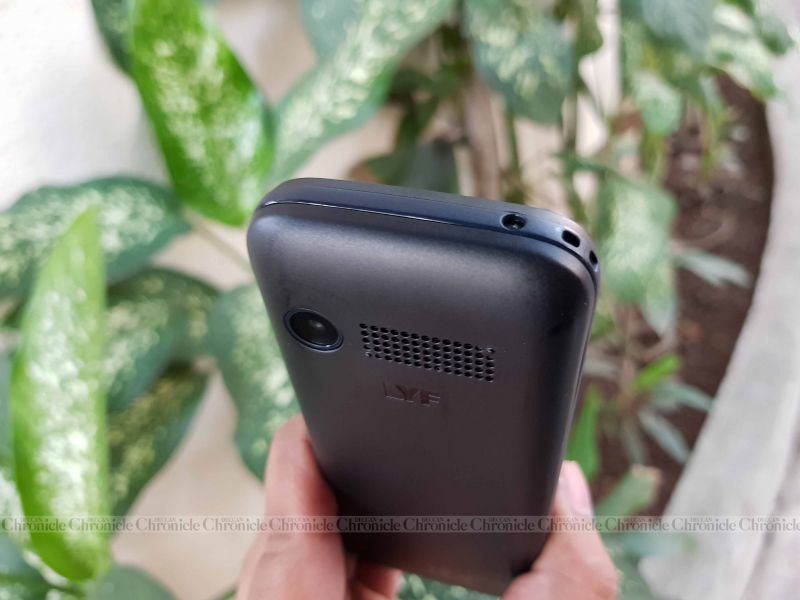 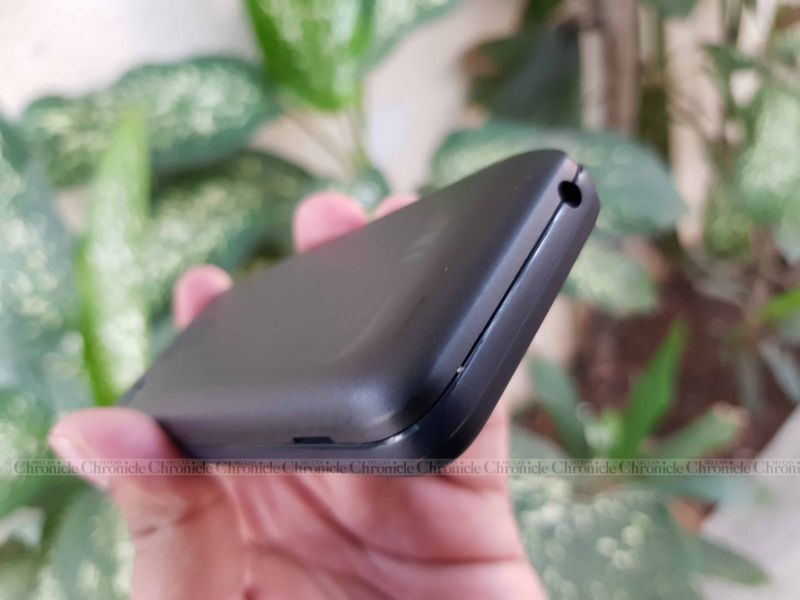 First things first — Reliance Jio doesn’t manufacture the JioPhone. Reliance’s sister brand LYF has a hand behind it. If you are superstitious about Indian-born smartphone brands making quality handsets, then get ready to be proven wrong. The JioPhone sports a great build quality that can match shoulders with certain well-built phones. Though it may not sport a metal-glass combo body, the JioPhone is made out of good quality plastics and a pleasing finish. 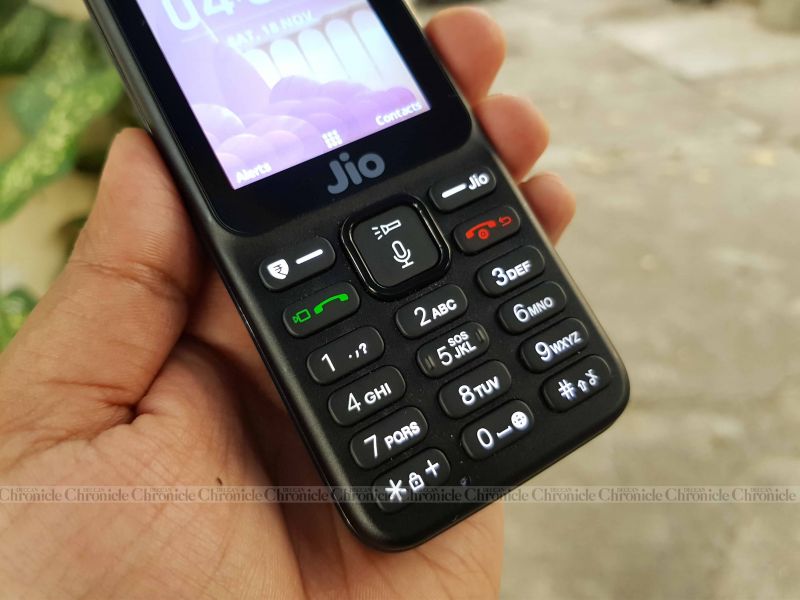 It’s very rare to put a phone’s keyboard under the magnifying glass these days as all of them pop-up on a smartphone’s touch display. The JioPhone has a physical keypad from the yesteryear — a T9 keyboard. T9s are not convenient to type long texts and require a lot of key pressing compared to a standard QWERTY layout — the JioPhone also needs a lot of physical input to type a sentence. However, the buttons are backlit, have good tactility and are comfortable to use for simple texting. The dial button also houses a shortcut for video calling whereas the ‘call/end’ button houses the much needed Back button (more on that later). The navigation buttons also house certain shortcuts whereas the ‘OK’ button in the centre can be used either to turn on the flashlight or the 'Hello Jio' — a basic voice assistant app to make calls, send SMS, do Google search and certain other functions. There’s also a shortcut for JioMoney as well as the My Jio app — features that a JioPhone user will need frequently. 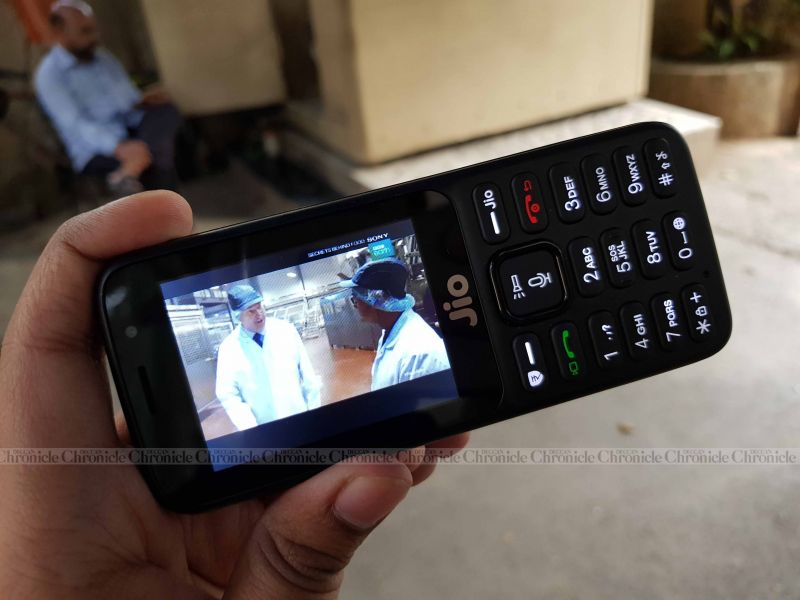 Reliance says that the JioPhone uses some sort of a 1GHz dual-core processor accompanied by 512MB RAM and 4GB of storage. Apart from these fundamental details, the JioPhone is one of the very few ‘smart’ feature phones to sport Wi-Fi connectivity and NFC chip apart from Bluetooth v4.1 connectivity. Of course, users can slot in a micro SD card of up to 128GB to store additional data. There’s also a micro USB port, which apart from charging the battery and transferring data, can also help you stream content to a TV through Jio’s JioMediaCable, which is available for purchase separately (to be made available soon). 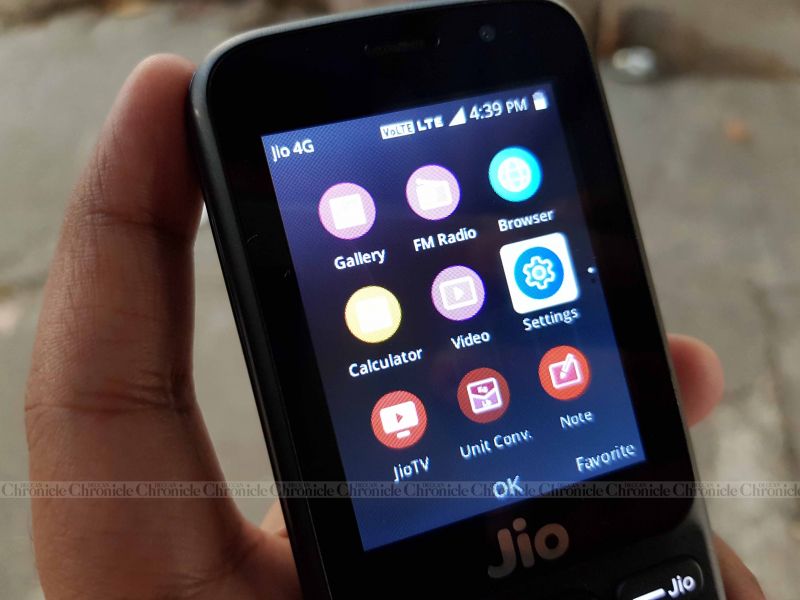 The JioPhone runs on KaiOS, which is loosely based on the not-so-popular FirefoxOS. The software is key to Jio’s claim of this being a quasi-smart feature phone. Since FirefoxOS was itself inspired by Android, you will get to enjoy a lot of similarities from an Android smartphone. You still have to long-press the star button (*) to unlock the phone but from there afterwards, it’s a different experience on this phone. The menu system resembles an Android phone’s app drawer and once you press the back button, you are taken back to the previous screen, not directly to the home screen similar to the conventional feature phone. The apps take some time to load, which is given considering the weak internals but shouldn’t be of immense worry to any JioPhone user. The software will get updates over the time with new features as well as apps (WhatsApp is planned for the JioPhone in the future). 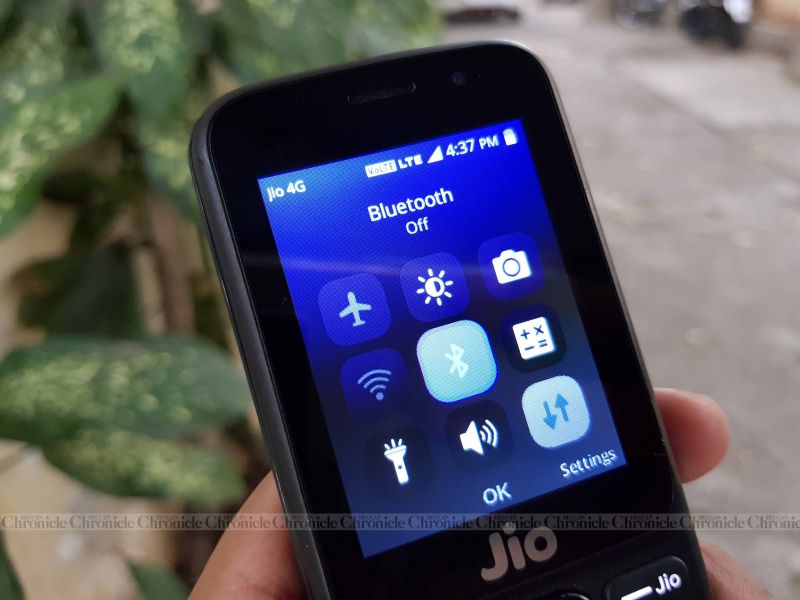 Since Jio retails the phone and is locking the handset by default to their 4G VoLTE network, all the ‘smart’ features are dependent on Jio’s own ecosystem of apps. However, the phone is not for sale presently and is only handed out to those who pre-ordered the phone during the offer period. You can make video calls through the JioVideoCall app, watch TV through the JioTV app, read news through the JioXpressNews app and so on. The apps may not be as easy to navigate as their ‘touch-enabled’ Android counterparts but after spending some time with the phone, you will be at home with these optimised Jio apps. 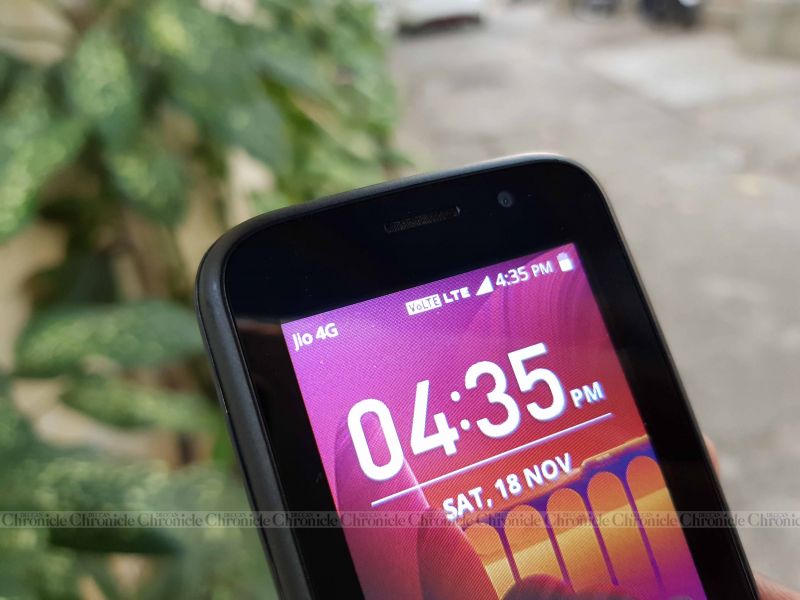 By this time, you must have been wondering about the display and its ability to handle all the features that it’s intended to showcase. Well, the 2.4-inch display has a pixel resolution of 240 x 320 pixels, which may sound funny but works well on this tiny display. To be honest, it would be unfair to compare the display with the most affordable smartphone that LYF itself makes. The display doesn’t have wide viewing angles, it renders washed out colours and makes some elements of the UI appear heavily pixelated. But at Rs 1,500, you cannot expect super accurate AMOLED displays with life-like HDR colours. Therefore, the display works for the JioPhone considering its dirt-cheap price tag. 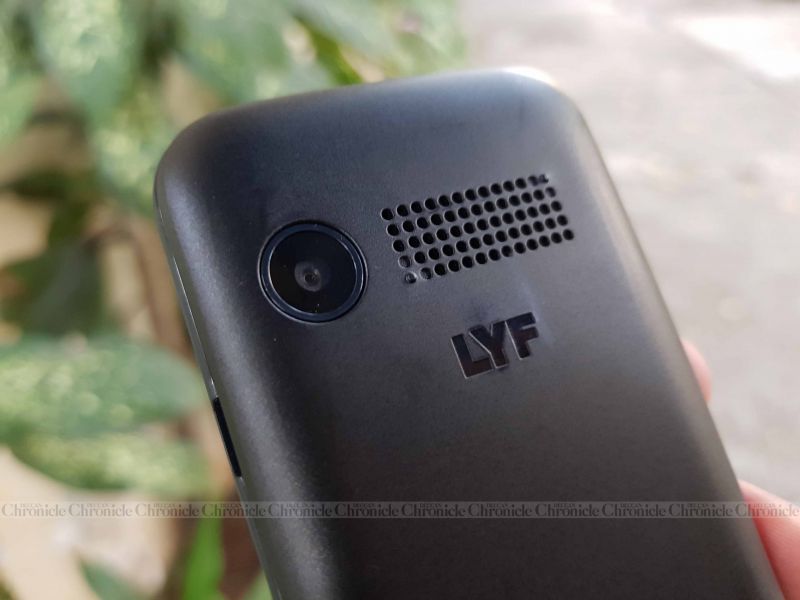 However, what surprised us the most was the audio department. The JioPhone houses one of the loudest speakers we have ever witnessed in a mobile phone, after a long time. You can probably make this the life of your house party without the need of a Bluetooth speaker. It lacks bass but makes up for it in higher and mid frequencies. Even when you are using your headphones with the 3.5mm port (yes, the JioPhone doesn’t rely on wireless audio witchcraft), you will get a well balanced audio output. Kudos to LYF. 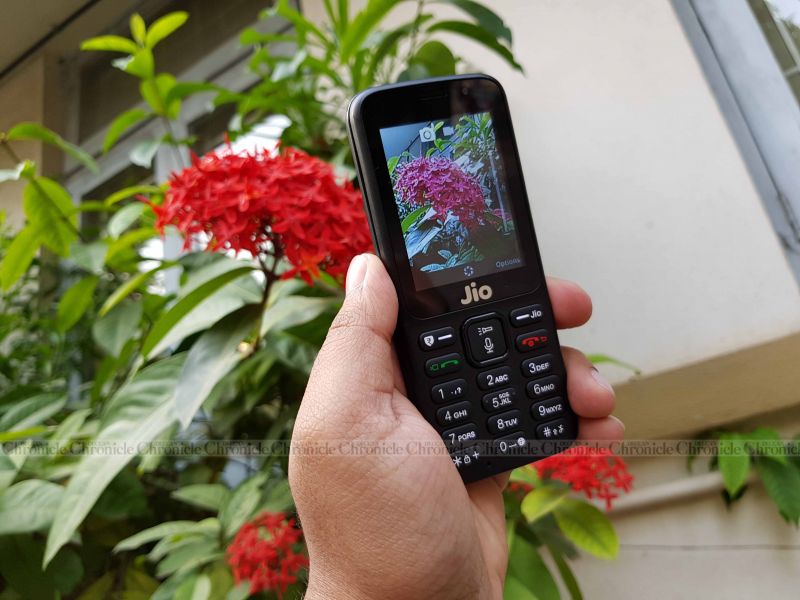 The JioPhone also comes with a pair of cameras, at one at each end. The rear unit is a 2MP sensor with no LED flash and no autofocus. The results from this sensor can be safely termed as far below average — washed out colours and inadequate sharpness as well as the contrast is what you’ll be looking at. The front VGA camera should be preferred strictly for video calls and it would be wise to avoid selfies with this baby. Check out some samples from the rear camera. 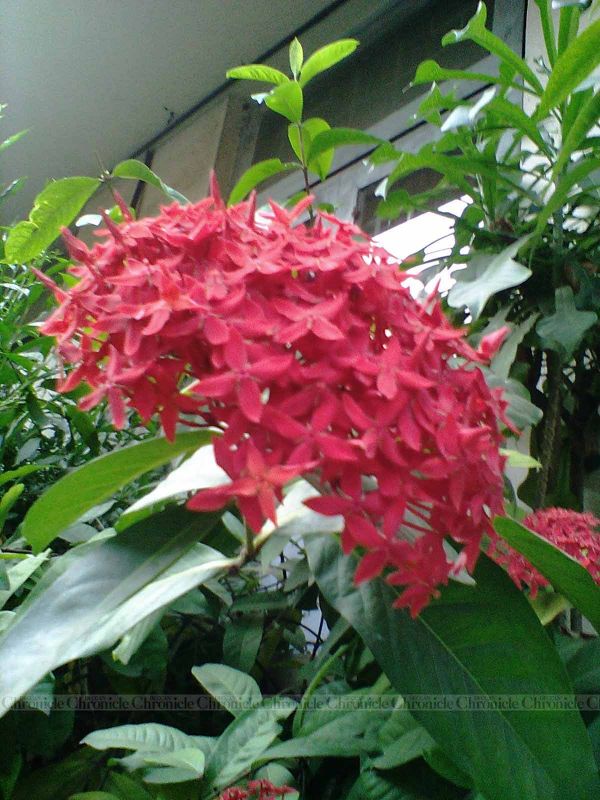 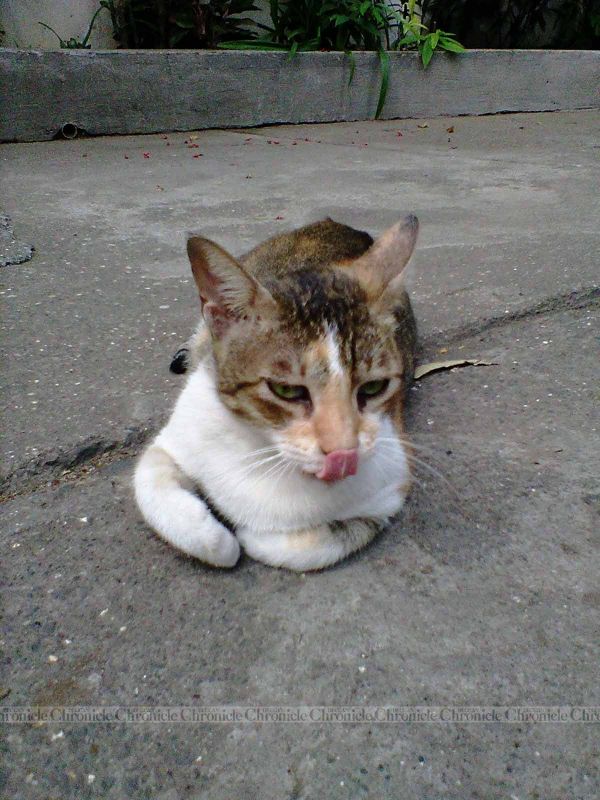 To keep the JioPhone alive, a 2000mAh battery is on duty. If you keep the mobile data ‘ON’ all day and make a lot of calls as well as stream live TV shows, then you could be expecting on an average a battery life of a day, which is on par with a conventional midrange smartphone and not a feature phone-trampling battery life of three to four days. 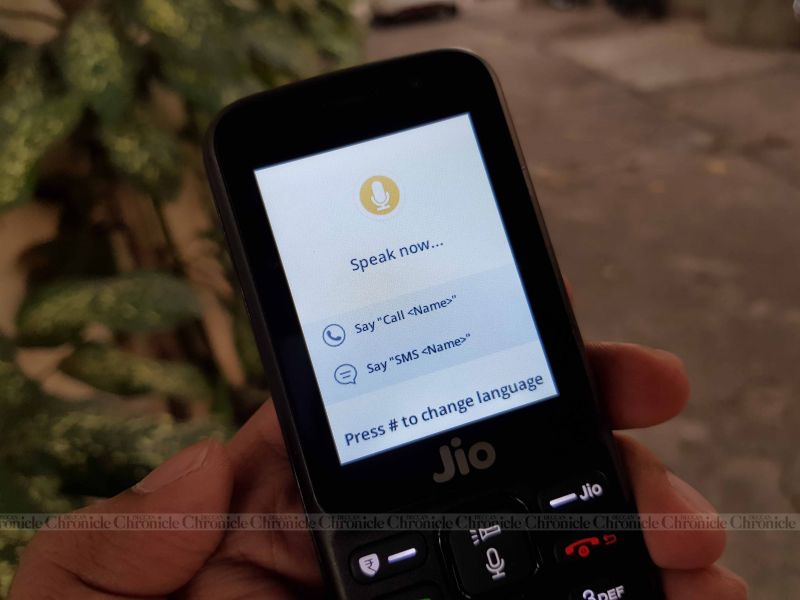 The JioPhone is essentially available under the contract, where users have to pay Rs 1,500 for the phone initially and keep recharging the data plans for three years, after which a sum of Rs 1,500 will be credited back to the user in exchange of the phone. This then clearly makes it suitable for those budget-conscious Internet app-savvy consumers looking for a robust phone that will work. It can also be recommended for the elderly who prefers to stay away from the complicated multitasking life of an average millennial. What it fails to do is make sense to the smartphone generation or those who have the means to get an expensive iPhone.

But this is what the JioPhone is meant to do — provide basic entry-level smartphone thrills on a very tight budget. The JioPhone can do most of the stuff that you require on a smartphone in 2017 but may not be the best medium to do so. However, this is a rebirth of the ‘smart feature phone’ and it shows that everyone can enjoy the best of modern-day mobile computing in any form factor. If you fancy the concept of the JioPhone, then this will be a good supplement to your daily commute luggage. However, remember that you will still need your smartphone in the other pocket — YouTube, Facebook, Candy Crush, Tinder and so on.....